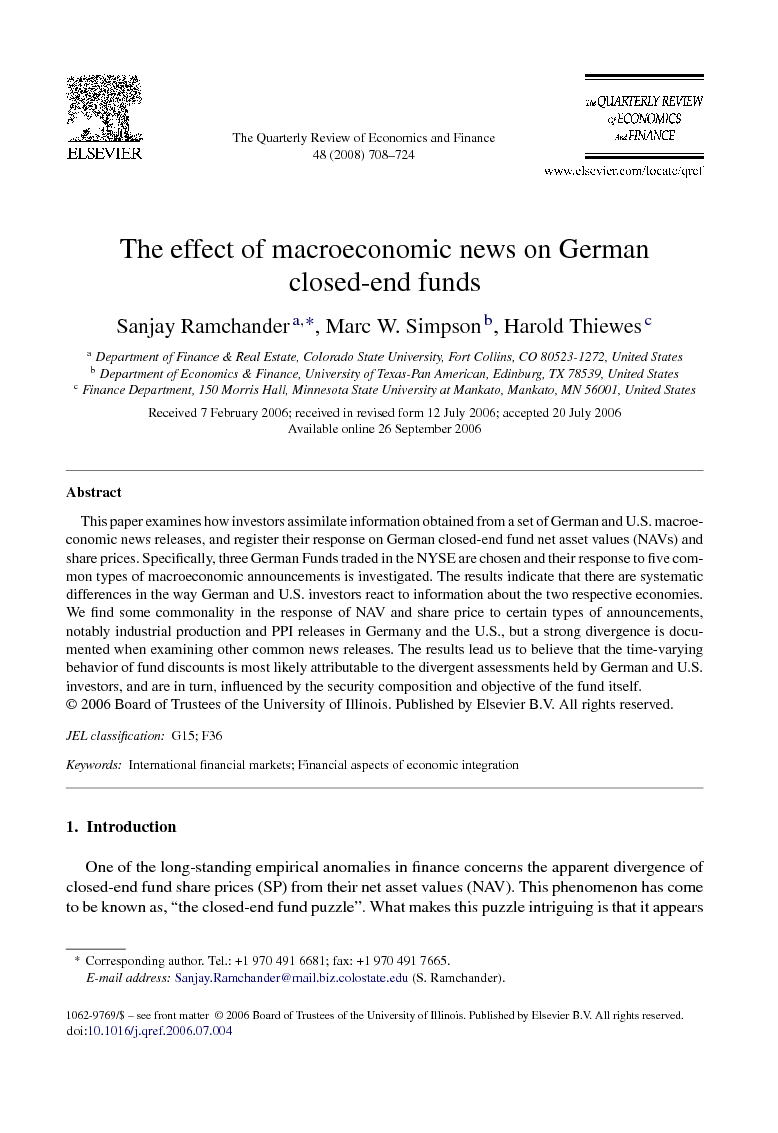 This paper examines how investors assimilate information obtained from a set of German and U.S. macroeconomic news releases, and register their response on German closed-end fund net asset values (NAVs) and share prices. Specifically, three German Funds traded in the NYSE are chosen and their response to five common types of macroeconomic announcements is investigated. The results indicate that there are systematic differences in the way German and U.S. investors react to information about the two respective economies. We find some commonality in the response of NAV and share price to certain types of announcements, notably industrial production and PPI releases in Germany and the U.S., but a strong divergence is documented when examining other common news releases. The results lead us to believe that the time-varying behavior of fund discounts is most likely attributable to the divergent assessments held by German and U.S. investors, and are in turn, influenced by the security composition and objective of the fund itself.

This study examines how investors assimilate information obtained from a set of German and U.S. macroeconomic announcements, and how their responses are registered on German closed-end funds net asset values and share prices. Specifically, three German funds, traded on the NYSE, are chosen and their responses to five common types of announcements (Industrial Production, the Producers Price Index, Retail Sales, the Trade Balance, and the Unemployment Rate) are investigated. The study extends the current research on closed-end funds by providing important insights into the (a) magnitude and direction of information flows in affecting the movements of NAV and SP, and (b) temporal behavior of fund discounts in the presence of macroeconomic news releases emanating from Germany and the U.S. The study documents that there are systematic differences in the way the funds’ NAVs and SPs respond to German and U.S. macroeconomic information. First, with regards to causal influences between NAV and SP, pooled results indicate the presence of bidirectional causality between the two variables. However, a closer examination of the results from individual funds confirms the relative dominance of the NAV in influencing the information transmission process between the two markets. Second, announcements that convey a surprise improvement in Germany's economic condition or a surprise deterioration in the U.S. economy – as given by changes in industrial production and PPI – increases the fund's NAV and SP by about the same magnitude. Third, movements in the funds’ discounts reflect divergent assessments made by German and U.S. investors to the release of macroeconomic news. Specifically, the differential reaction on the part of U.S. investors relative to German investors to surprises in the announcement of German retail sales, German trade balances, and German unemployment numbers; coupled, with a lack of response on the part of German investors to similar U.S. macroeconomic surprises appears to be significant in driving the time-varying changes in the funds’ discounts. Fourth, the apparent divergence that is observed in the funds’ discounts is contingent on the composition and objective of the closed-end fund itself. In our study, we find the fund discounts of the Emerging Germany Fund, which has a significant exposure to eastern European markets, are most susceptible to the influences of divergent expectations. In comparison, the fund discounts of the Germany Fund, which is comprised heavily of large capitalization German firms, exhibits the strongest response to German announcement surprises, yet the Fund exhibits no reaction to surprises in U.S. economic news releases. Therefore, in terms of the differential investor sentiment hypothesis, we argue that the significant reaction of the fund's discount to macroeconomic announcements is indicative of a time-varying, information sensitive, relationship between the SP and NAV. If the closed-end country funds’ discounts were completely a result of mispricing, taxation, transactions costs, or other such phenomena, there would be little reason for it to react in this time-varying fashion to the release of economic information. It may be an interesting and worthwhile exercise to extend the current empirical framework to include other country funds. Should other country funds adjust to news releases in a similar manner, a theoretical model could then be developed to better explain changes in the foreign closed-end fund pricing relationships and the speed of adjustment to global economic events. These issues are left for future research.