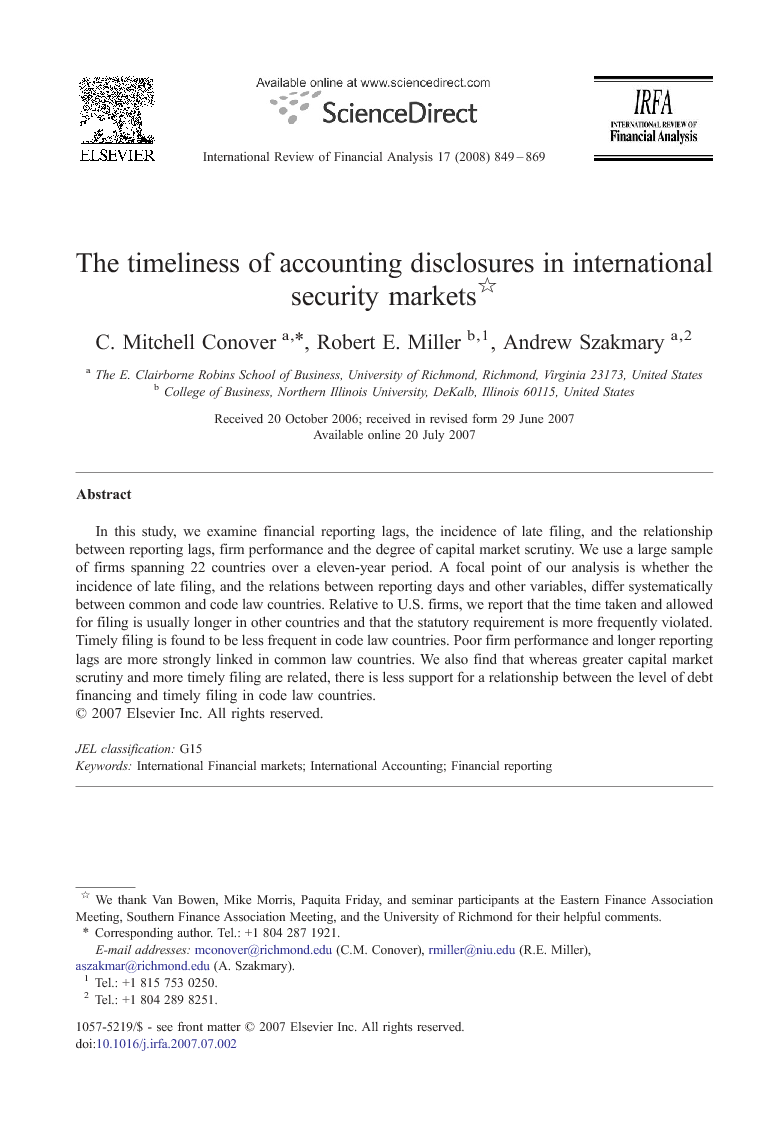 In this study, we examine financial reporting lags, the incidence of late filing, and the relationship between reporting lags, firm performance and the degree of capital market scrutiny. We use a large sample of firms spanning 22 countries over a eleven-year period. A focal point of our analysis is whether the incidence of late filing, and the relations between reporting days and other variables, differ systematically between common and code law countries. Relative to U.S. firms, we report that the time taken and allowed for filing is usually longer in other countries and that the statutory requirement is more frequently violated. Timely filing is found to be less frequent in code law countries. Poor firm performance and longer reporting lags are more strongly linked in common law countries. We also find that whereas greater capital market scrutiny and more timely filing are related, there is less support for a relationship between the level of debt financing and timely filing in code law countries.

In this investigation of the filing timeliness of annual accounting statements in 22 countries over a eleven year period, we report that the time allowed for filing in other countries is usually longer than the 90 days required in the U.S., and (with the exception of Singapore) that the statutory requirement is more frequently violated. When we classify countries by legal system using the same metric as Ball et al. (2000), a key finding of our study is that timely filing is less frequent in code law countries, as the mean number of days to file and the incidence of late filing are both significantly greater in code law countries than in common law countries. We also show that geographic distinctions, by themselves, do not explain differences in timeliness across countries, and that timeliness has generally increased during our sample period. When we examine relations between reporting days (the number of days after fiscal year end that a firm takes to report financial results) and firm-specific variables, two findings stand out. First, there is a highly significant and robust negative relation between return on equity and reporting days in common law countries; in contrast, there is no evidence of any uniformly or even predominantly negative relation between these variables in code law countries. If ROE can be interpreted as our most important proxy for firm performance, this result implies that late-filing firms tend to be poor performers in common law (but not in code law) countries. This finding, which to some degree extends those of Alford et al. (1994) for the U.S. to common law countries, is consistent with our hypothesis H3 and with numerous studies, e.g. Ball et al. (2000), La Porta et al., 1997 and La Porta et al., 1998, Ali and Hwang (2000), which suggest that firms do not have as great an incentive to report on a timely basis in code law countries. Due to these lesser incentives, we surmise that late filing in these countries is not significantly related to poor performance, because late filing in general is much more common and many firms that are good performers also file late. A second noteworthy finding in our study is that among variables proxying for the degree of public capital market scrutiny that a firm is likely to face, market value of equity is most closely associated with filing timeliness. We find a highly significant negative relation between reporting days and market value of equity in most common law countries, i.e. firms with larger market capitalizations tend to file more quickly. Although there is some evidence of a negative relation in code law countries as well, the association between market capitalization and reporting days in these countries is less strong. Using univariate tests, we also report a significant, negative relation between analyst following and reporting days in many countries. There is limited support for the hypothesis that firms with greater financial leverage in code law countries file their financial reports on a less timely basis. In summary, the results of our study support the contention of Joos and Lang (1994) and Ball et al. (2000) that a country's legal system strongly influences a firms' financial reporting. Our findings suggest that the common vs. code law distinction is key, and that further investigation of how earnings management practices distort the relation between reported earnings and stock returns, along the lines of Garcia Lara et al. (2005) but using a broader set of countries, may prove fruitful. The availability of daily returns in these markets would also provide evidence as to whether the immediate market reaction to late filing varies by common and code law countries. Lastly, the use of other proxy variables for firm profitability, growth, size, and liquidity may yield additional insight into the relative differences between common and code law country firms