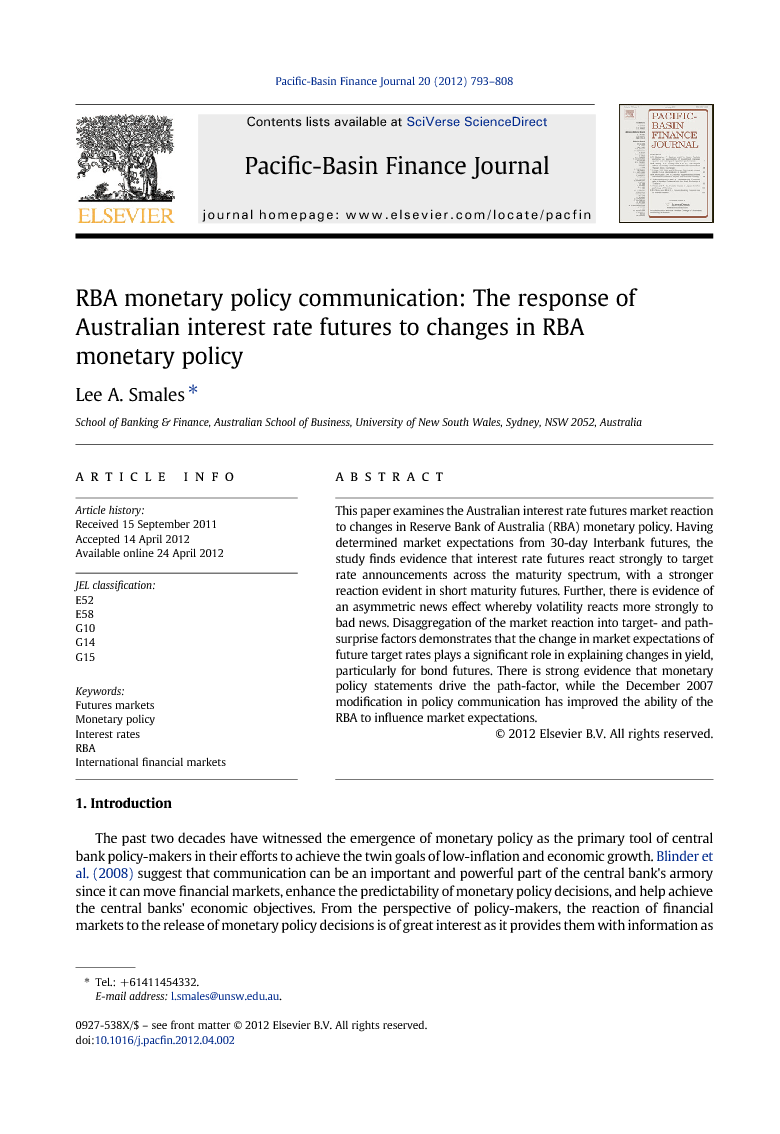 This paper examines the Australian interest rate futures market reaction to changes in Reserve Bank of Australia (RBA) monetary policy. Having determined market expectations from 30-day Interbank futures, the study finds evidence that interest rate futures react strongly to target rate announcements across the maturity spectrum, with a stronger reaction evident in short maturity futures. Further, there is evidence of an asymmetric news effect whereby volatility reacts more strongly to bad news. Disaggregation of the market reaction into target- and path-surprise factors demonstrates that the change in market expectations of future target rates plays a significant role in explaining changes in yield, particularly for bond futures. There is strong evidence that monetary policy statements drive the path-factor, while the December 2007 modification in policy communication has improved the ability of the RBA to influence market expectations.

This paper provides comprehensive evidence on the impact of the RBA's target rate news and monetary policy statements across the maturity spectrum of the Australian interest rate futures market. The key findings are summarized as follows. First, there is evidence that the RBA's target rate news has both an economically and statistically significant impact on the high-frequency returns and conditional volatility of Australian interest rate futures across the maturity spectrum. Consistent with the existing literature, the announcement news impact is observed to be stronger in the shorter maturity futures. Second, when considering conditional volatility, there is evidence of an asymmetric news effect where markets tend to have a stronger reaction to bad news (falling yields) than to good news (rising yields). Third, it is possible to disaggregate the effect of monetary policy surprises into a target-factor and a path-factor that account for changes in market expectations of future target rate decisions. In the two-factor model both factors are positive and significant, and whilst the path-factor is more important for explaining changes in the yield of long-term instruments than for short-term instruments, the target-factor remains the most important across all futures contracts. Fourth, there is clear evidence that the presence of monetary policy statements drives the path-factor. The December 2007 modification in policy communication appears to have improved the ability of the RBA to influence market expectations of future levels of the target rate. Finally, there is evidence that the role of the quarterly release of the monetary policy statement in forming market expectations has diminished following in the period post-December 2007. The findings of this paper provide assurance for central banks, and the RBA in particular, that recent innovations in the communication of monetary policy decisions have improved the ability to guide market expectations surrounding the future path of target rate decisions. In addition, the findings have relevance for market participants; informed traders should utilize short-end futures prior to announcements as they react most dramatically to news, while option traders may seek to implement volatility trades immediately prior to the announcement due to the relative differences in volatility of each futures contract — this may be particularly relevant for traders of single-session options traded on the SFE. Further research could consider the spill-over effect of non-Australian monetary policy announcements; in particular it would be of interest to consider how statements by the U.S. FOMC and ECB impact the path factor of Australian interest rates. Additionally, the profitability of trading strategies utilizing this analysis may be considered. Finally, since it is possible to calculate the theoretical price for 30-Interbank futures under any target rate decision outcome, it is possible to examine the issue of market mispricing following announcements.