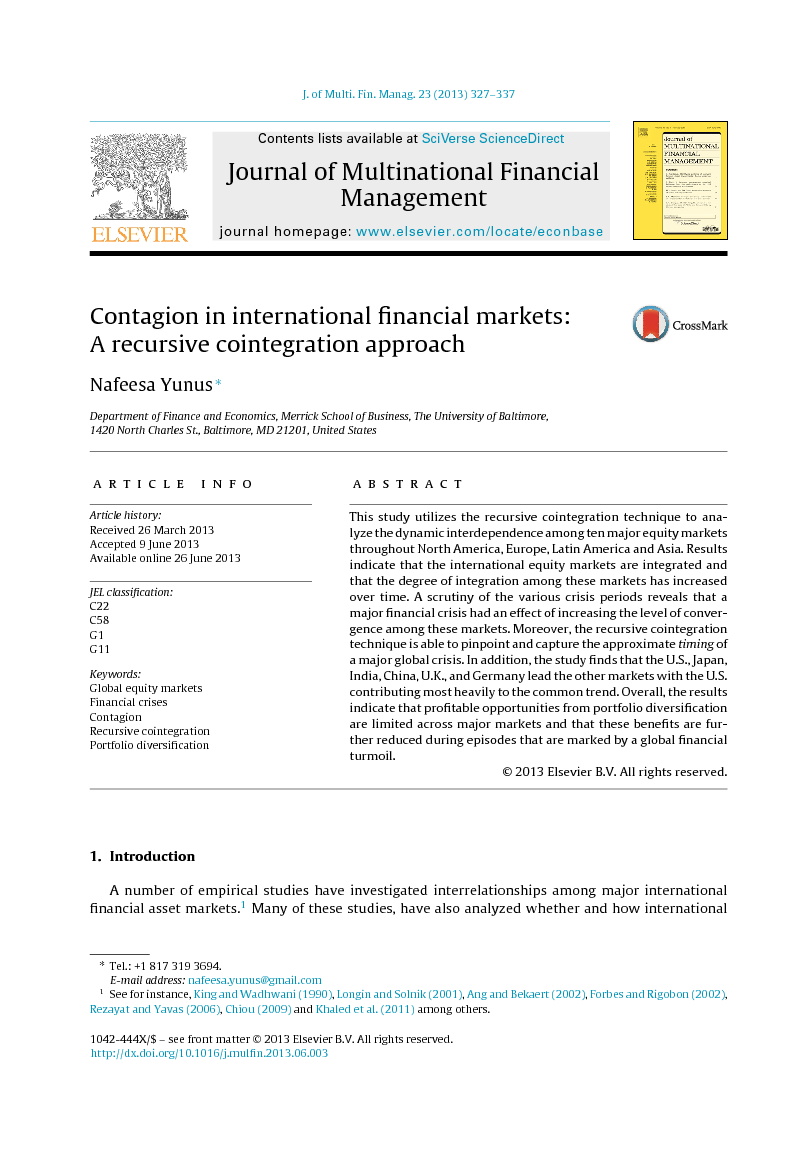 This study utilizes the recursive cointegration technique to analyze the dynamic interdependence among ten major equity markets throughout North America, Europe, Latin America and Asia. Results indicate that the international equity markets are integrated and that the degree of integration among these markets has increased over time. A scrutiny of the various crisis periods reveals that a major financial crisis had an effect of increasing the level of convergence among these markets. Moreover, the recursive cointegration technique is able to pinpoint and capture the approximate timing of a major global crisis. In addition, the study finds that the U.S., Japan, India, China, U.K., and Germany lead the other markets with the U.S. contributing most heavily to the common trend. Overall, the results indicate that profitable opportunities from portfolio diversification are limited across major markets and that these benefits are further reduced during episodes that are marked by a global financial turmoil.

A number of empirical studies have investigated interrelationships among major international financial asset markets.1 Many of these studies, have also analyzed whether and how international financial asset markets react with one another during periods that are marked by a global financial crisis. Several techniques have been utilized over the years to understand and analyze financial market contagion – a significant increase in cross market linkages after a shock to one market or a set of markets.2 The majority of studies, use the correlation metric to evaluate financial contagion. Basically, these studies examine whether cross correlations between markets increase significantly during a major crisis (crisis period) or after a crisis (post-crisis period) in comparison to periods before the crisis (pre-crisis period). If the correlations increased significantly during and after crisis periods, in comparison to pre-crisis periods, the authors conclude evidence in favor of contagion. However, as noted in Forbes and Rigobon (2002), the correlation metric is susceptible to heteroscedasticity biases which may lead to misleading conclusions regarding the nature of bivariate linkages between global markets. Hence, alternative econometric techniques have been developed over the years to assess spillover of shocks across international markets. The evidence from these studies is mixed with some studies showing evidence in favor of global contagion while others suggesting evidence on the contrary. The current study, proposes a new and straightforward method for evaluating contagion in global equity markets. Essentially, the study utilizes the recursive cointegration technique as developed by Hansen and Johansen (1999) and further refined by Brada et al. (2005), Rangvid (2001) and Mylonidis and Kollias (2010), to assess financial contagion. The countries chosen in the study are some of the largest (in terms of market capitalization) and most established countries throughout North America, Europe, Asia and Latin America and include the U.S., Australia, Japan, China, India, France, Germany, the U.K., Brazil, Mexico. The analysis covers a period beginning January 1993 and ending December 2008 and makes several significant contributions to the literature. First, the study analyzes whether these major markets are integrated and whether the level of convergence among these markets have increased over time. Second, if evidence of integration is found, the study pays special attention to episodes marked by a major financial crisis to analyze whether the level of integration among these markets increased with the onset of a global crisis. Moreover, this step of the analysis also determines, whether the increased level of convergence, coincides with the approximate timing of the economic crisis. Over the 1993–2008 time span several crises have occurred. The Peso crisis originated in the 1994–1995 sub period; the Asian crisis emerged in 1997 followed by the Russian crisis in 1998; the U.S. Dot com bubble burst in 2000 and the U.S. housing market crashed towards the end of 2006. Third, the study determines whether each of the markets are integrated or if certain markets are excludable from the long-run relationships. And finally, the study also determines the markets which contribute most to the common stochastic trend and drive each of the global markets toward the long-run equilibrium relationships. To the author's knowledge, this is the first study that analyzes these ten major markets within the same framework, utilizes the recursive cointegration approach and scrutinizes market interactions during periods of tranquility as well as during periods of volatility in this context. In addition, the study takes a much broader outlook and graphically analyzes the changing pattern of integration and the dynamic evolution of linkages among major global equity markets financial asset markets over an expansive time-span. With the collapse of the housing market, the issue of financial market contagion has received renewed attention from academics and practitioners alike. Overall, the analysis in this paper should be beneficial to portfolio managers, pension fund managers and other institutional investors in the U.S. and abroad who are contemplating to invest across international markets in making more informed portfolio allocation decisions. The findings will also be beneficial to regulators and policymakers who are interested to analyze cross-market linkages and are eager to understand the dynamics of equity market interactions especially during times marked by a major global crisis. The remainder of the paper is organized as follows: Section 2 presents a relevant literature review; Section 3 sets forth a brief description of the data; Section 4 discusses the methodology; Section 5 examines empirical results; and, finally, Section 6 contains concluding remarks.

This study analyzes the dynamic interdependence among ten major markets throughout North America, Europe, Asia and Latin America over a period beginning January 1993 and ending December 2008. Specifically, the study utilizes recursive cointegration technique to (a) evaluate the evolution of linkages among these major equity markets and determine whether the level of convergence among these markets have increased over time; (b) investigate whether a major global financial crisis had an effect of increasing the extent of linkages among these markets; and (c) analyze, if the recursive cointegration procedure is able to identify the approximate timing of a global economic crisis. As a byproduct, the study identifies markets that are part of the cointegrating relationships and separates out those that contribute to the common trend and lead the integrated markets toward the long-run equilibrium relationships. To the author's knowledge, this is the first study that utilizes the recursive cointegration technique to examine contagious behavior of major international financial markets in this context. Moreover, in comparison to prior studies, this paper analyzes long-run interactions among international financial markets within a multivariate framework and over an extended period of time, to gain a broader understanding and an overall picture of various crises episodes within a single framework. Results indicate that international financial markets are integrated and bound together by four long-run relationships (cointegrating vectors). Further analysis reveals that the markets have become increasingly integrated over time. Recursive cointegration analysis corroborate these findings and indicate that a major financial crisis had the effect of increasing the level of convergence among these markets. Moreover, this technique is also able to capture the approximate timing of a crisis: the first and the second CIV emerge in 1993 and early 1994, which may be attributed to normal interdependencies among international financial markets, the third CIV emerges in late 1994, announcing the Mexican peso crisis; the fourth CIV, appears momentarily during the 1997–1998 subperiod, symbolizing Asian and the Russian financial crises respectively; the fourth CIV disappears for a few years and re-appears in the year 2000 marking the dot com bubble and burst. This fourth CIV vanishes again for several years resurfacing again towards the end of 2006 marking the most recent U.S. housing crisis. Next, results of hypothesis tests indicate that none of the markets can be excluded from the long-run relationships implying that each of the international markets are part of the four cointegrating vectors; in addition, common trend analysis indicate that U.S., Japan, India, China, U.K., and Germany are the leaders that drive each market towards the long-run equilibrium relationships. The results also reveal that the U.S. contributes the most heavily to the common trends indicating the pre-eminent position of the U.S. as the global leader in that it leads and drives each of the other markets. The results of this study offer important and useful implications. Since all the countries are found to be tied together in the long run (cointegrated), it implies that little gain in risk reduction may be achieved through holding investments across global equity markets since shocks to one country are propagated to others. In addition since the degree of convergence among these countries have increased over time, it indicates that contagion from macroeconomic shocks possibly intensified and hence long-run diversification benefits have been further eroded. Moreover, since the markets become increasingly integrated during episodes marked by a global financial crisis, the results further indicate that the diversification potential decreases even further during times of economic turmoil- when investors need it most. The findings provide a novel and straightforward approach to deciphering contagious behavior in international financial markets. These conclusions should be beneficial to investors, portfolio managers, pension fund managers and other institutional investors in the U.S. and abroad who are contemplating to invest in international equity funds in making more informed portfolio allocation decisions. The findings will also be beneficial to regulators and policymakers who are interested to analyze cross-market interactions and are eager to understand the behavior and reaction of global equity markets especially during episodes marked by a major financial crisis.