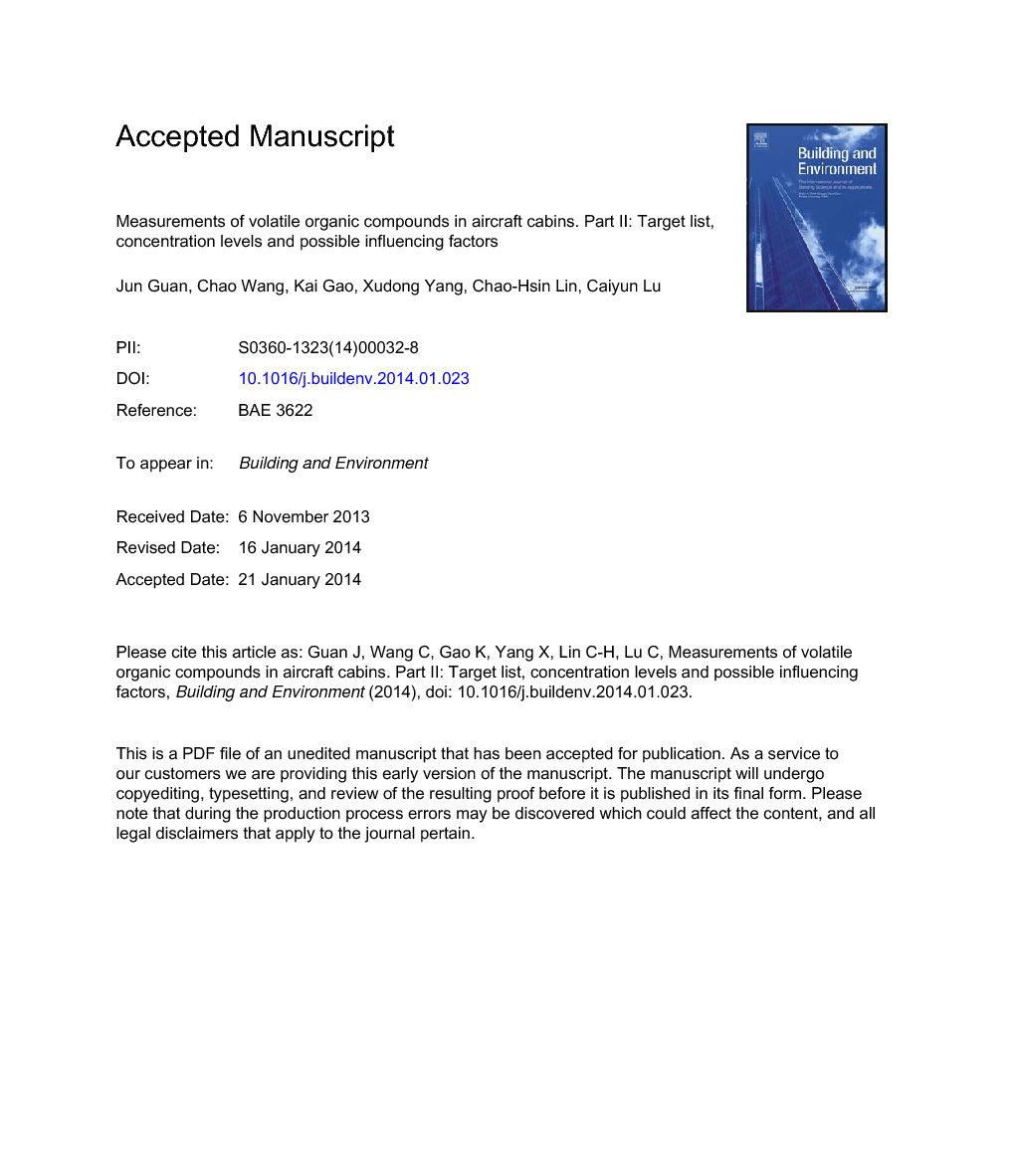 To better understand the overall VOC levels and their key influencing factors in aircraft cabin, we conducted in-flight measurements in 51 randomly selected flights by quantitative methods that were previously introduced in part I of this research program. Of those 51 flights, several potential influencing factors, including flight phases (N=51), meal services (N=22) and air supply (N=13) were analyzed by statistical and contrastive methods. Based on the statistical results, two detailed case studies on peak values and air supply during flights further indicate the source fluctuation characters of different VOCs. Key conclusions derived from this study include: 1) Combined with qualitative results on some specific VOC species with high detection rate in part I, a list of 29 compounds were proposed as target VOCs in cabin air. 2) Most target VOCs had significant differences (p<0.05) with their concentration levels at three different phases of the tested flights. 3) In-flight measurements indicated that peak values commonly occurred during before take-off and cruise phases. The effect of meal service was considered to be limited due to its short service duration in spite of its dominant contribution to the concentration increase of total VOCs during meal time. 4) Concentration levels of some specific VOCs in supply air were significantly lower than those in recirculated air (p<0.05), indicating the evident dilution effect of bleed air on cabin VOCs. This study could help to better understand cabin air quality and its major influencing factors.

As reviewed in part I of this research program [1], volatile organic compounds (VOCs) in aircraft cabin environment have aroused many concerns as the same with other built environments [2], [3], [4], [5] and [6]. Nagda et al. (2003) presented a critical review and assessment of aircraft cabin air quality studies with measured levels of VOCs [7]. The review of six previous studies on 2-30 flights per study before 2003 indicates that under routine aircraft operations, contaminant levels of most compounds in aircraft cabins were similar to those in residential and office buildings, with two exceptions of higher levels of ethanol and acetone than those in residential/office buildings and other transportation vehicles, and with inversely lower levels of certain chlorinated hydrocarbons and fuel-related contaminants in aircraft cabins. After review of the previous studies, the authors recommended larger number of tested flights and a broader analytical window of species. Chester et al. (2004) and MacGregor et al. (2008) took measurements in four long-haul commercial flights for cabin air quality including VOCs and other air contaminants in cabins [8] and [9]. Some specific VOCs, such as toluene, tetrachloroethene, and 1,4-dichlorobenzene- were found, but at significantly lower concentrations than dominant VOCs such as ethanol and acetone. For more recent work, Spengler et al. (2012) [10] carried out environmental monitoring in the passenger cabin of 83 commercial flights, and indicated that some passenger-related VOCs and aldehydes were higher for flights with decreased ventilation rates. However, the previous studies also indicated that the air quality and environmental conditions in the passenger cabin of commercial airplanes were comparable or better than other built environments such as offices, schools and residences with a few exceptions (e.g. [1], [4], [10], [11] and [12]). According to the review of previous publications and qualitative research work described in the companion paper [1], comprehensive and broad measurements of VOCs should be conducted to cover a wide variety of actual circumstances, including different flight phases, cabin services (e.g., meal service) and air supplies to yield a general picture of cabin VOCs by the methods of statistical and factor analysis. For this purpose, a target list of VOCs in aircraft cabin should be primarily built for the status and key influencing factor analysis of cabin environment based on comprehensive analysis on the detection rate, concentration level, and other issues related to possible health or discomfort. And thus, statistical results should be derived for the cabin VOC concentration ranges, and potential influence factors. In part I of this research program, we conducted in-flight VOC measurements in 107 commercial flights. Cabin VOCs were presented by category groups and detection rates (DR), which was defined as a ratio value of the frequency of a detected VOC (number of times) and the total tested flight number (N=107). In this paper, quantitative VOC concentration levels in 51 flights were further obtained and presented. Effects of several key influencing factors were analyzed, and a VOC target list in aircraft cabin was proposed for further references.

This study aims to understand the VOC concentration levels and possible influencing factors in aircraft cabins by quantitative analysis of in-flight measurement data under actual operating conditions. The following conclusions may be drawn from this study: (1) Combined with qualitative results on the VOC species with high detection rate in the companion paper, 29 compounds were identified as the target VOCs in cabin air. (2) The concentration levels of target VOCs were statistically compared at three operating phases of tested flights (N=51), and most VOCs had significant differences (p<0.05). Different source characteristics in various phases could potentially contribute to such differences. (3) In-flight measurements indicated that peak values were commonly derived from before take-off and cruise phases. The effect of meal service was further studied by statistical analysis (N=22) and case studies (N=2). The effect may be considered to have limited contribution to cabin air due to short service duration and high cabin ventilation rate. (4) Statistical analysis (N=13) and cases studies (N=2) indicate that the concentration levels of some target VOCs in supply air were significantly lower than that in recirculated air (p<0.05), indicating the evident dilution effect of bleed air on cabin VOCs.