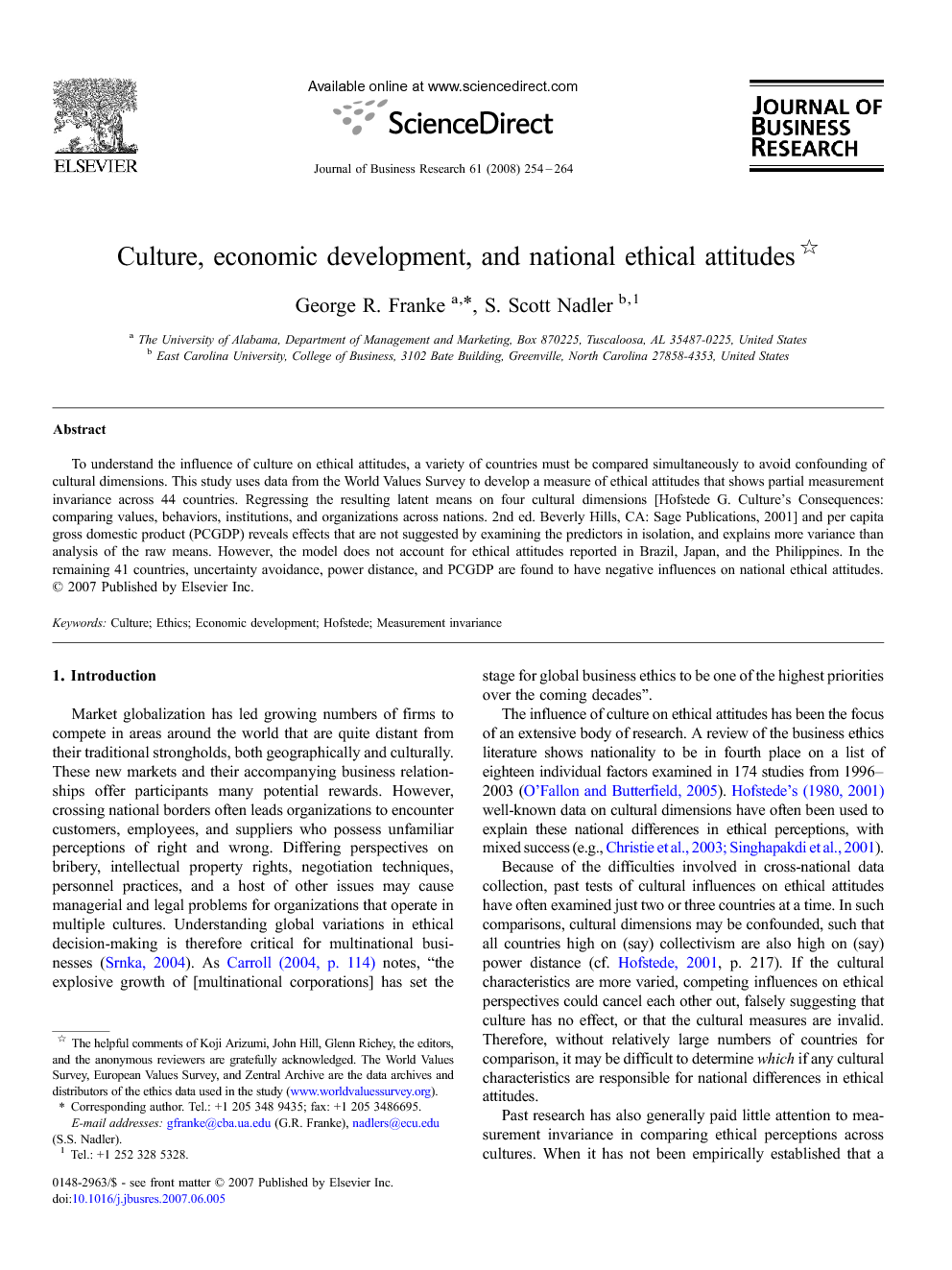 To understand the influence of culture on ethical attitudes, a variety of countries must be compared simultaneously to avoid confounding of cultural dimensions. This study uses data from the World Values Survey to develop a measure of ethical attitudes that shows partial measurement invariance across 44 countries. Regressing the resulting latent means on four cultural dimensions [Hofstede G. Culture's Consequences: comparing values, behaviors, institutions, and organizations across nations. 2nd ed. Beverly Hills, CA: Sage Publications, 2001] and per capita gross domestic product (PCGDP) reveals effects that are not suggested by examining the predictors in isolation, and explains more variance than analysis of the raw means. However, the model does not account for ethical attitudes reported in Brazil, Japan, and the Philippines. In the remaining 41 countries, uncertainty avoidance, power distance, and PCGDP are found to have negative influences on national ethical attitudes.

Market globalization has led growing numbers of firms to compete in areas around the world that are quite distant from their traditional strongholds, both geographically and culturally. These new markets and their accompanying business relationships offer participants many potential rewards. However, crossing national borders often leads organizations to encounter customers, employees, and suppliers who possess unfamiliar perceptions of right and wrong. Differing perspectives on bribery, intellectual property rights, negotiation techniques, personnel practices, and a host of other issues may cause managerial and legal problems for organizations that operate in multiple cultures. Understanding global variations in ethical decision-making is therefore critical for multinational businesses (Srnka, 2004). As Carroll (2004, p. 114) notes, “the explosive growth of [multinational corporations] has set the stage for global business ethics to be one of the highest priorities over the coming decades”. The influence of culture on ethical attitudes has been the focus of an extensive body of research. A review of the business ethics literature shows nationality to be in fourth place on a list of eighteen individual factors examined in 174 studies from 1996–2003 (O'Fallon and Butterfield, 2005). Hofstede, 1980 and Hofstede, 2001 well-known data on cultural dimensions have often been used to explain these national differences in ethical perceptions, with mixed success (e.g., Christie et al., 2003 and Singhapakdi et al., 2001). Because of the difficulties involved in cross-national data collection, past tests of cultural influences on ethical attitudes have often examined just two or three countries at a time. In such comparisons, cultural dimensions may be confounded, such that all countries high on (say) collectivism are also high on (say) power distance (cf. Hofstede, 2001, p. 217). If the cultural characteristics are more varied, competing influences on ethical perspectives could cancel each other out, falsely suggesting that culture has no effect, or that the cultural measures are invalid. Therefore, without relatively large numbers of countries for comparison, it may be difficult to determine which if any cultural characteristics are responsible for national differences in ethical attitudes. Past research has also generally paid little attention to measurement invariance in comparing ethical perceptions across cultures. When it has not been empirically established that a measure has the same meaning across cultures, “cross-national differences in scale means might be due to true differences between countries on the underlying construct or due to systematic biases in the way people from different countries respond to certain items” (Steenkamp and Baumgartner, 1998, p. 78). Similarities in observed means might also reflect actual similarities or uncorrected biases. For example, Steenkamp and Baumgartner (1998) describe a study in which response biases led the raw observed scores to be equal across four European countries, though the correct latent means differed significantly. Therefore, the possibility of bias in measured ethics perceptions makes the available empirical evidence ambiguous about similarities and differences across cultures. The purpose of this study is to address these two gaps in the literature. The focus is on national ethical attitudes, based on perceptions of the justifiability of four behaviors having moral implications. Ethics data for 44 countries are taken from the World Values Survey (www.worldvaluessurvey.org) and examined for measurement invariance. The resulting latent means are then regressed on cultural scores from Hofstede (2001) and values of per capita gross domestic product (PCGDP) as a measure of economic development. The findings add to the literature by revealing strong, significant influences on ethical attitudes that could not be recognized by studying cultural or economic dimensions in isolation.

An important consideration for cross-cultural research in general, not just when examining national ethical attitudes, is the trade-off between breadth and depth. In primary research on a handful of cultures, the number and type of variables examined is under the researcher's control. However, variability across cultures may be constrained, and it may be impossible to examine the effects of one cultural characteristic holding other characteristics constant. A single analysis of a relatively large number of countries may be more informative than a body of research comparing countries two at a time. In addition, assessing measurement invariance is especially crucial when comparing just two or three countries, because response bias in even one country could magnify or minimize the cross-cultural differences. The findings suggest that organizations may encounter ethical conflicts when operating in areas that differ from their home country in uncertainty avoidance, power distance, economic development, or other cultural dimensions. Finding partners with compatible principles promotes trust and long-term business success (Srnka, 2004). Resolving conflicts may require sensitivity to competing aims and attitudes. Preparing to recognize and deal with differences in ethical perceptions across countries is a challenging but necessary aspect of organizations' participation in the global marketplace.