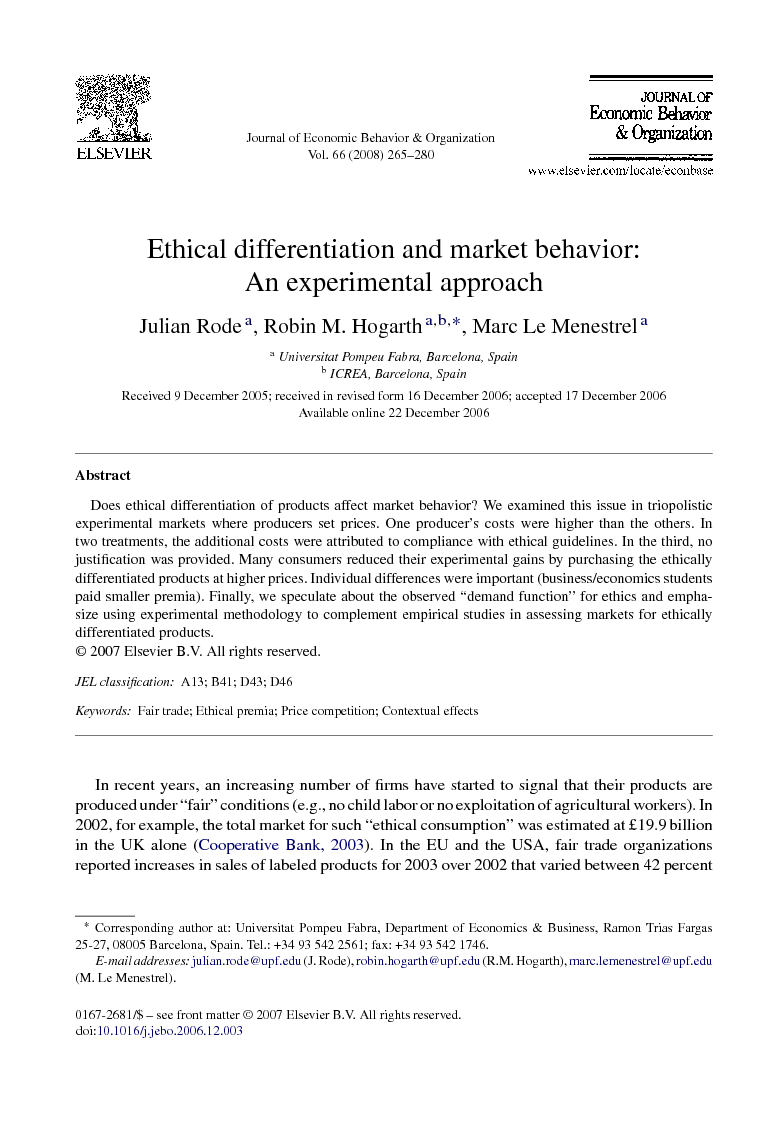 Does ethical differentiation of products affect market behavior? We examined this issue in triopolistic experimental markets where producers set prices. One producer's costs were higher than the others. In two treatments, the additional costs were attributed to compliance with ethical guidelines. In the third, no justification was provided. Many consumers reduced their experimental gains by purchasing the ethically differentiated products at higher prices. Individual differences were important (business/economics students paid smaller premia). Finally, we speculate about the observed “demand function” for ethics and emphasize using experimental methodology to complement empirical studies in assessing markets for ethically differentiated products.

We conducted market experiments to explore the behavior of economic actors when a traded good involves an ethical dimension and when selling the ethically differentiated version of the good implies an increase in production costs. We show that producers price products with higher costs at a premium and that many consumers accept to pay this premium when it is linked to an ethical differentiation. In our experiments, we also found that consumers pay such premia when they lack knowledge of the amount of extra costs incurred by ethical producers. The role of individual differences was emphasized by the finding that students of economics and business are less prepared to pay ethical premia than students from other fields. Our work further demonstrates that people with experience in the ethical experimental market state a significantly lower willingness-to-pay than those without such experience. Our data can be viewed from perspectives of both consumers and firms. Purchasing data can be thought of as illustrating a demand for ethics. The general trend is downward sloping as confirmed by the negative coefficients for the price premium variable of the regression analysis reported in Table 2. Fig. 2 and Fig. 3 show that demand for the ethical good falls rapidly between premia of 0 to approximately 5 and is quite flat thereafter. However, as noted above, our data are marked by important individual differences, and it is unclear how the “demand function” might vary for different segments of the population. (See also Carrigan et al., 2004, concerning the “older” market.) Understanding such variation is an important topic for future research. Moreover, we suspect that this could be sensitive to contextual variables that are typically not studied in economic analyses (cf., Hsee and Rottenstreich, 2004). As to producers, the existence of distinctive regions of price sensitivity suggests discontinuities in optimal price setting for ethical goods. More specifically, when the general price level is close to marginal cost, profit is maximized by posting a large premium thereby obtaining high profit from a small fraction of ethical consumers. In contrast, the ethical producer's optimal premium is zero for higher prices where maximal profits are captured by a large market share. Indeed, this analysis demonstrates the potential of experimental methods to illuminate the consequences of different pricing strategies that would be difficult to examine in field studies characterized by inattentive consumers and noisy data—in particular, in regions involving low premia and high market shares. Firms can, of course, elect to become ethical producers for many reasons. Our work suggests the possibility of assessing the economic consequences of such decisions. In our experiment, we cannot eliminate the possibility that ethical purchasing behavior was subject to a so-called experimenter effect; that is, participants wanted experimenters to see that they had acted “ethically.” Such effects have been documented in dictator game experiments (Hoffman et al., 1996). However, it is important to note that our experiments differ significantly from dictator games in that they involved repeated market transactions as opposed to single social actions. If indeed there were such experimenter effects, they could go both ways.10 In addition, unlike dictator game experiments, our primary goal was not to identify and separate the contributions of different motivations. Indeed, we strongly suspect that purchasing ethical goods in the presence of others can induce similar social demand effects in the marketplace. Whether and to what extent ethical purchasing is sensitive to higher and lower levels of social presence is an important question for further research.11 As noted at the outset, this work recognizes that contextual variables can play an important role in economic phenomena. Specifically, we introduced one contextual modification (concerning ethical differentiation) into an otherwise abstract market setting and observed the consequences. Our use of a specific contextual variable (i.e., ethical product differentiation) was guided by the observation of a specific market phenomenon (the existence of “fair trade”). We do not claim that all contextual variables would have similar impacts. Finally, given the ambiguity of interpreting empirical studies on the market for “ethical” goods, we believe our approach provides a valuable complement for what is becoming an increasingly important issue for both firms and consumers.