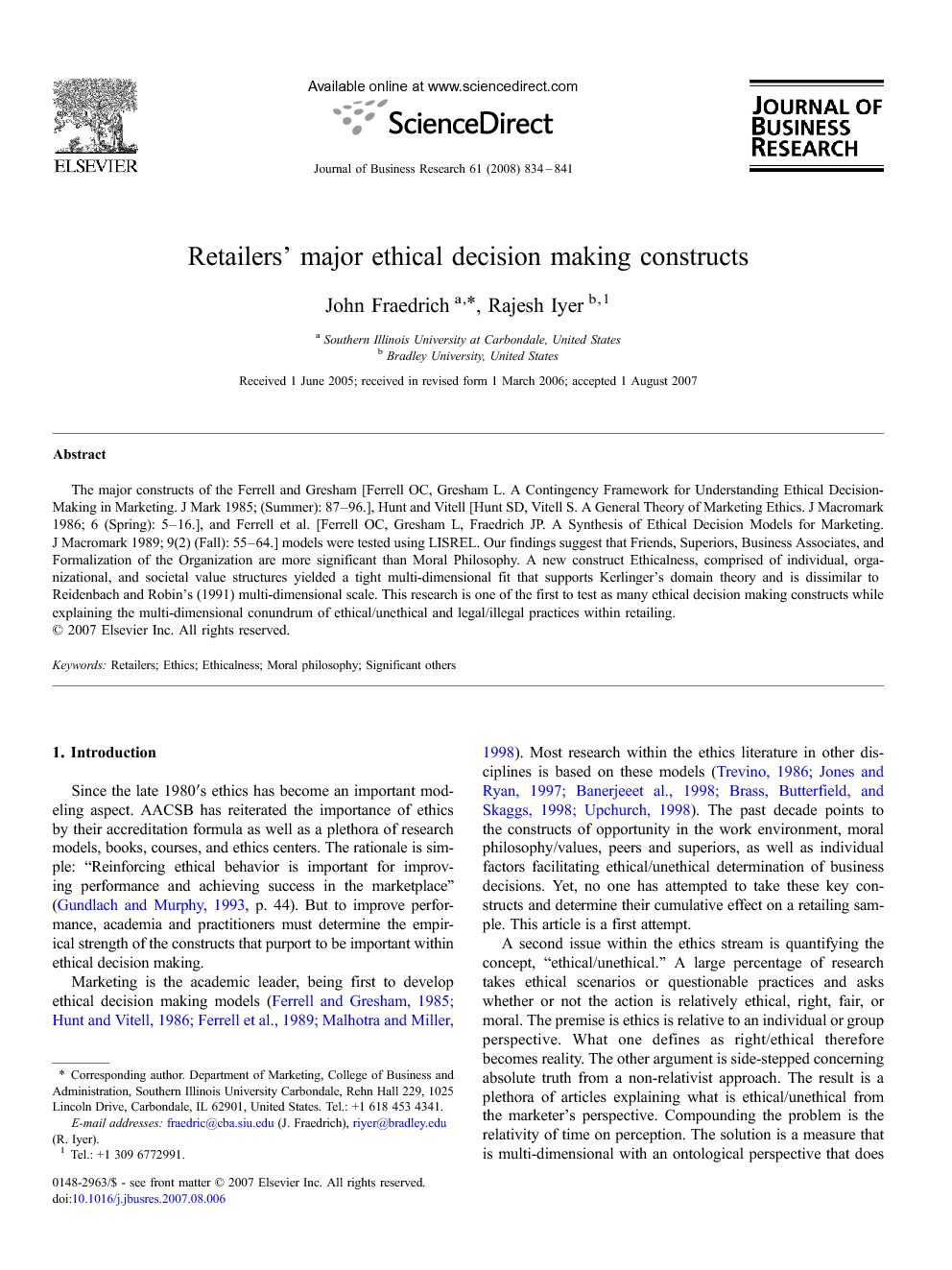 The major constructs of the Ferrell and Gresham [Ferrell OC, Gresham L. A Contingency Framework for Understanding Ethical Decision-Making in Marketing. J Mark 1985; (Summer): 87–96.], Hunt and Vitell [Hunt SD, Vitell S. A General Theory of Marketing Ethics. J Macromark 1986; 6 (Spring): 5–16.], and Ferrell et al. [Ferrell OC, Gresham L, Fraedrich JP. A Synthesis of Ethical Decision Models for Marketing. J Macromark 1989; 9(2) (Fall): 55–64.] models were tested using LISREL. Our findings suggest that Friends, Superiors, Business Associates, and Formalization of the Organization are more significant than Moral Philosophy. A new construct Ethicalness, comprised of individual, organizational, and societal value structures yielded a tight multi-dimensional fit that supports Kerlinger's domain theory and is dissimilar to Reidenbach and Robin's (1991) multi-dimensional scale. This research is one of the first to test as many ethical decision making constructs while explaining the multi-dimensional conundrum of ethical/unethical and legal/illegal practices within retailing.

Since the late 1980′s ethics has become an important modeling aspect. AACSB has reiterated the importance of ethics by their accreditation formula as well as a plethora of research models, books, courses, and ethics centers. The rationale is simple: “Reinforcing ethical behavior is important for improving performance and achieving success in the marketplace” (Gundlach and Murphy, 1993, p. 44). But to improve performance, academia and practitioners must determine the empirical strength of the constructs that purport to be important within ethical decision making. Marketing is the academic leader, being first to develop ethical decision making models (Ferrell and Gresham, 1985, Hunt and Vitell, 1986, Ferrell et al., 1989 and Malhotra and Miller, 1998). Most research within the ethics literature in other disciplines is based on these models (Trevino, 1986, Jones and Ryan, 1997, Banarjee et al., 1998, Brass et al., 1998 and Upchurch, 1998). The past decade points to the constructs of opportunity in the work environment, moral philosophy/values, peers and superiors, as well as individual factors facilitating ethical/unethical determination of business decisions. Yet, no one has attempted to take these key constructs and determine their cumulative effect on a retailing sample. This article is a first attempt. A second issue within the ethics stream is quantifying the concept, “ethical/unethical.” A large percentage of research takes ethical scenarios or questionable practices and asks whether or not the action is relatively ethical, right, fair, or moral. The premise is ethics is relative to an individual or group perspective. What one defines as right/ethical therefore becomes reality. The other argument is side-stepped concerning absolute truth from a non-relativist approach. The result is a plethora of articles explaining what is ethical/unethical from the marketer's perspective. Compounding the problem is the relativity of time on perception. The solution is a measure that is multi-dimensional with an ontological perspective that does not originate with the marketer. In other words, once the decision is made how does the individual, business unit and society perceive the action? Pursuant to this question, three domains are identified, tested, and overall paths and associative strengths to moral philosophy, peers and superiors, and other individual factors determined. The sections that follow identify the significant constructs and hypotheses, define ethicalness, and analyze a model using LISREL.