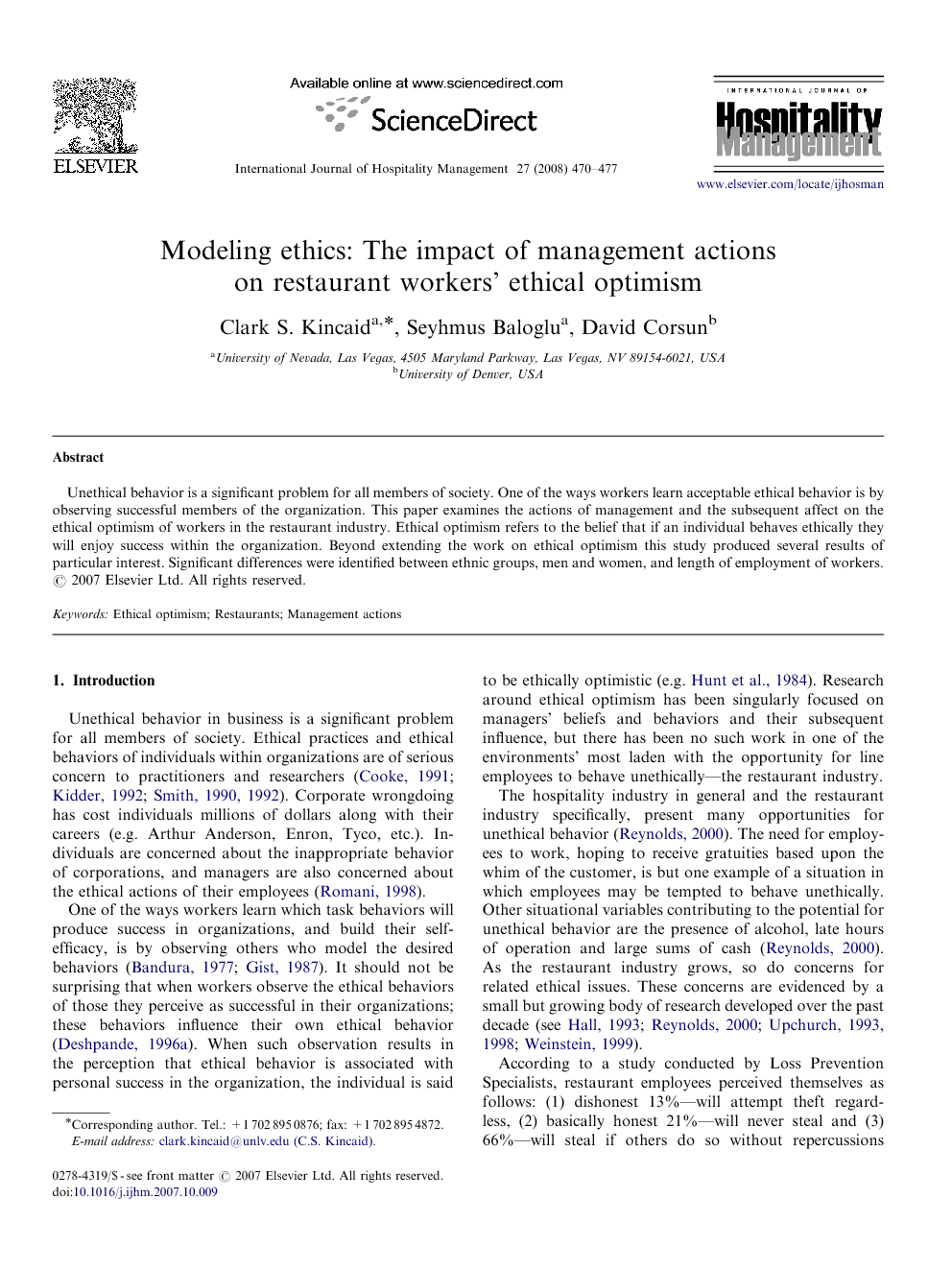 Unethical behavior is a significant problem for all members of society. One of the ways workers learn acceptable ethical behavior is by observing successful members of the organization. This paper examines the actions of management and the subsequent affect on the ethical optimism of workers in the restaurant industry. Ethical optimism refers to the belief that if an individual behaves ethically they will enjoy success within the organization. Beyond extending the work on ethical optimism this study produced several results of particular interest. Significant differences were identified between ethnic groups, men and women, and length of employment of workers.

Unethical behavior in business is a significant problem for all members of society. Ethical practices and ethical behaviors of individuals within organizations are of serious concern to practitioners and researchers (Cooke, 1991; Kidder, 1992; Smith, 1990 and Smith, 1992). Corporate wrongdoing has cost individuals millions of dollars along with their careers (e.g. Arthur Anderson, Enron, Tyco, etc.). Individuals are concerned about the inappropriate behavior of corporations, and managers are also concerned about the ethical actions of their employees (Romani, 1998). One of the ways workers learn which task behaviors will produce success in organizations, and build their self-efficacy, is by observing others who model the desired behaviors (Bandura, 1977; Gist, 1987). It should not be surprising that when workers observe the ethical behaviors of those they perceive as successful in their organizations; these behaviors influence their own ethical behavior (Deshpande, 1996a). When such observation results in the perception that ethical behavior is associated with personal success in the organization, the individual is said to be ethically optimistic (e.g. Hunt et al., 1984). Research around ethical optimism has been singularly focused on managers’ beliefs and behaviors and their subsequent influence, but there has been no such work in one of the environments’ most laden with the opportunity for line employees to behave unethically—the restaurant industry. The hospitality industry in general and the restaurant industry specifically, present many opportunities for unethical behavior (Reynolds, 2000). The need for employees to work, hoping to receive gratuities based upon the whim of the customer, is but one example of a situation in which employees may be tempted to behave unethically. Other situational variables contributing to the potential for unethical behavior are the presence of alcohol, late hours of operation and large sums of cash (Reynolds, 2000). As the restaurant industry grows, so do concerns for related ethical issues. These concerns are evidenced by a small but growing body of research developed over the past decade (see Hall, 1993; Reynolds, 2000; Upchurch, 1993 and Upchurch, 1998; Weinstein, 1999). According to a study conducted by Loss Prevention Specialists, restaurant employees perceived themselves as follows: (1) dishonest 13%—will attempt theft regardless, (2) basically honest 21%—will never steal and (3) 66%—will steal if others do so without repercussions (Kessler International, 1999). Unethical acts by restaurant industry employees manifest in several areas, and such acts are committed by both managers and employees. One of these areas is internal theft. The average annual theft per employee is $218 according to the Fourth Annual Survey of Restaurant and Fast Food Employees (Restaurants, 1999). Other unethical acts committed by restaurant employees are: (1) charging guests for food or drinks not served to them, (2) sabotaging products served to guests by contaminating them with bodily fluids, (3) hiding service charges applied to guest checks so that the server may receive two gratuities, (4) drinking alcohol while working, (5) using or selling drugs in the workplace, (6) not charging for products served to guests, (7) stealing products from the restaurant such as food and alcohol, (8) stealing tips from other employees, (9) accepting bribes from purveyors to “push” their products, (10) changing credit card charges after the guest has signed the voucher and (11) intentionally destroying restaurant property to sabotage management (Kincaid, 2002). While some of the unethical behaviors described may be attributed to a restaurant company, the company may be distinct from its employees in that only individuals choose to behave unethically, whether or not the behavior is supported by the company. Loucks (1987) states that it is not the company that behaves ethically or unethically, but rather the individuals employed by the company who are responsible for ethical behavior. “Business decisions are made by individuals or by committees; thus the ethics of business in reality are the ethics of the individuals who make business decisions” (Fritzche, 1991, p. 842). Clearly, if individual employees choose to act unethically, their behavior may adversely impact the organization (McDonald and Zepp, 1990). It is, therefore, in management's best interest to try to influence workers’ ethical behavior, and one of the most powerful ways to influence such behavior is behavior modeling (Deshpande, 1996a). This study fills a gap in the hospitality literature around ethics in that it examines the impact of managers’ behaviors on subsequent employee ethical optimism. Specifically, we explore the degree to which managers’ actions influence employee ethical optimism in restaurant settings. Additionally, this study contributes to the body of work conducted in empirical ethical research as called for in earlier studies (Ford and Richardson, 1994; O’Fallon and Butterfield, 2005; Randall and Gibson, 1990). The variations in ethical optimism dimensions associated with the demographic profile of the respondents were also examined to better understand the background variables influencing the concept.

The results of this study provide practitioners with insight into how management actions influence the organizational environment. Managers are faced with a responsibility to the organization and its stakeholders to engage in business practices that will generate a profit for the company. In order to achieve this goal, managers and other employees may feel a need to compromise the ethical standards of the organization. Management actions were found to have a significant effect on all three dimensions of ethical optimism. The relationship between management actions and the dimensions of ethical optimism imply that management behavior influences the perceptions of acceptable ethical behavior in the restaurant industry. Beyond extending the work on ethical optimism into the hospitality context and finding three dimensions of ethical optimism, this study produced several results of particular interest. First, there were differences in ethical optimism between those individuals responding to a Spanish language version of the survey versus those responding to an English language version, differences between men and women, and differences between those individuals who have worked for the organization less than 2 years versus those individuals who have worked for the organization longer than 2 years. Spanish language respondents were significantly less optimistic than English language respondents on the dimensions of ruthless and parasite. These results suggest that Spanish language respondents felt successful people within the organization were more unethical than unsuccessful individuals and that successful people achieved their success at the expense of others. There are two possible explanations for these findings, one of which is cultural and the other relates to the nature of the positions in which many Spanish-speaking respondents worked. A large number of the Latino/Hispanic workers who participated in this study worked in back-of-house, typically low-wage positions. Such workers may be less optimistic because they see themselves as being taken advantage of by management. Although language may explain part of why these individuals worked in the back-of-the-house, they may also perceive a glass ceiling and the lack of a meritocracy in terms of opportunities for growth provided by management. Women participants were more ethically optimistic than their male counterparts. Specifically, they perceived that if one engaged in parasitic and bad behavior the result would not be individual success. These findings could have more to do with the general outlook and management preferences women may have than with the specific managers’ behaviors they observed in their workplaces. As described herein, parasitic and bad behaviors run counter to the ways in which women tend to lead (Greenberg and Sweeney, 2005; Samartseva and Fomina, 2002). Women being led may simply not want to believe that such behaviors, those they tend to see less of in female than male managers, lead to success. The glass ceiling and meritocratic effects posited above may hold for this group of respondents as well. The last area of significance in this study was found between employees who have worked for the organization less than 2 years versus employees who have worked for the organization more than 2 years. Employees with greater tenure in the organization were significantly more optimistic than those employees newer to the organization. These results may be explained by individuals bringing to the organization a preconceived belief that the only way to succeed within an organization is through unethical behavior, and/or longer tenured workers remembering the way things were versus how they are now. It may also be that as people become longer tenured they become more invested in the status quo and rationalize the way things are. Our feelings about self are tied to our group memberships (Tajfel, 1982) and longer tenured workers may be trying to preserve a positive sense of self by assessing the organization in an ethically optimistic way. 5.1. Limitations Several factors related to this research must be taken into consideration when drawing conclusions from the findings. First, this study included only two restaurant organizations, which affects the generalizability of the findings. Organizations operating in different market segments or geographical locations or of different sizes may have produced different results. Another possible limitation lies in the potential for socially desirable responses, which may be present when respondents are asked for their perceptions of sensitive subjects, such as ethics. Great efforts, both written and verbal, were made to assure respondents of anonymity. However, some individuals when personally asked to participate in the study declined for reasons known only to them. The questionnaire indicated that completed instruments would be transported to the university supporting this research and would remain the property of the university without any possibility of being retained by the organization itself. 5.2. Implications This research is consistent with previous studies indicating that management actions have significant effects on the ethical orientation of the organization (Victor and Cullen, 1988). Managers influence the ethical climate as perceived by employees through modeling of ethical and unethical behaviors (Victor and Cullen, 1988). Given that this is the only known attempt to assess the impact of management actions on ethical optimism in the restaurant industry, repeated testing is recommended. It would be beneficial to further test the ethical optimism scale in other restaurant organizations to see if the items would load onto the factors found in this study. Researchers may also want to consider examining multiple restaurant organizations, which would provide an avenue for comparison among firms. Finally, and probably most important, it would be useful to examine the degree to which management actions influence workers’ perceptions of the ethical climate in the organization. Ethical climate is an element of culture and may act as a mediator in the relationship between management actions and ethical optimism.