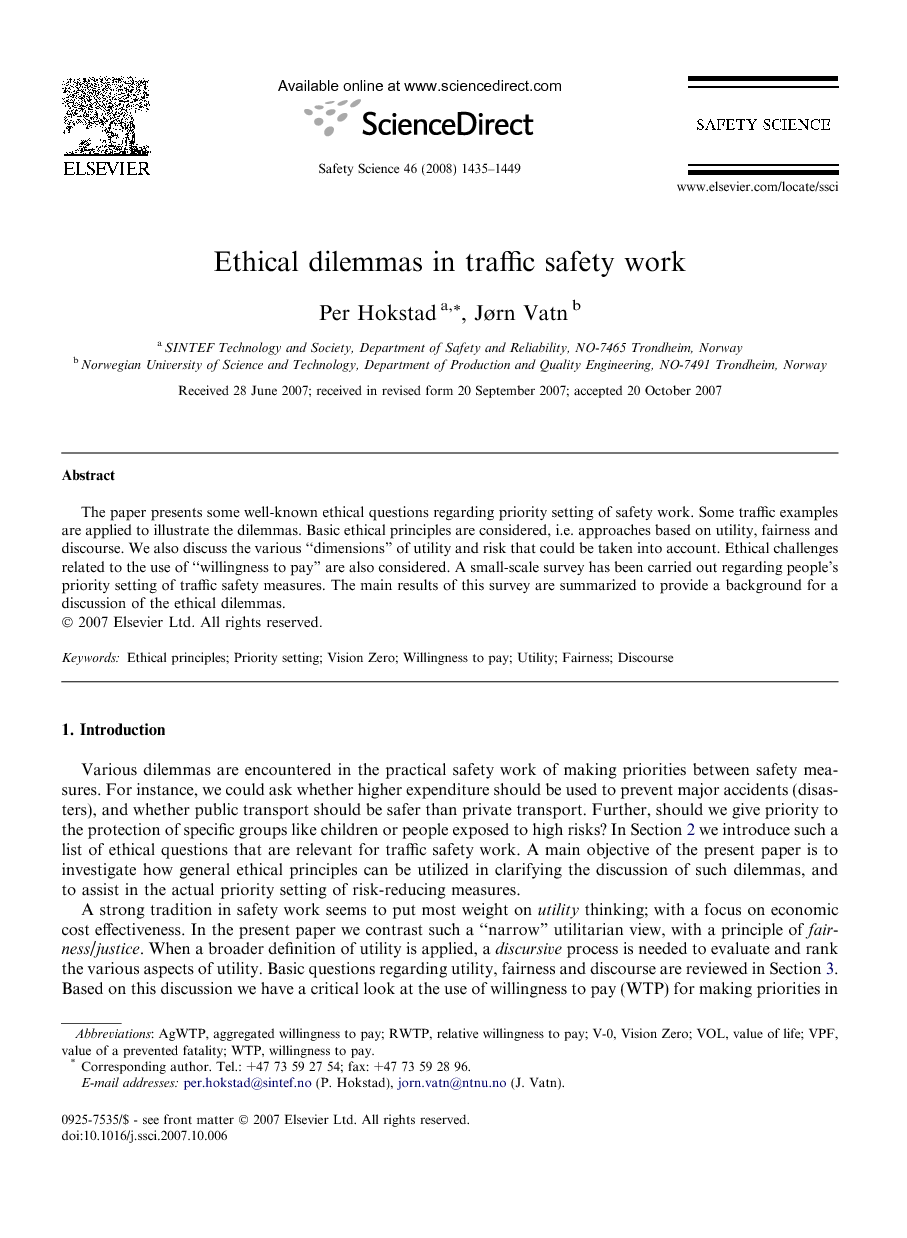 The paper presents some well-known ethical questions regarding priority setting of safety work. Some traffic examples are applied to illustrate the dilemmas. Basic ethical principles are considered, i.e. approaches based on utility, fairness and discourse. We also discuss the various “dimensions” of utility and risk that could be taken into account. Ethical challenges related to the use of “willingness to pay” are also considered. A small-scale survey has been carried out regarding people’s priority setting of traffic safety measures. The main results of this survey are summarized to provide a background for a discussion of the ethical dilemmas.

Various dilemmas are encountered in the practical safety work of making priorities between safety measures. For instance, we could ask whether higher expenditure should be used to prevent major accidents (disasters), and whether public transport should be safer than private transport. Further, should we give priority to the protection of specific groups like children or people exposed to high risks? In Section 2 we introduce such a list of ethical questions that are relevant for traffic safety work. A main objective of the present paper is to investigate how general ethical principles can be utilized in clarifying the discussion of such dilemmas, and to assist in the actual priority setting of risk-reducing measures. A strong tradition in safety work seems to put most weight on utility thinking; with a focus on economic cost effectiveness. In the present paper we contrast such a “narrow” utilitarian view, with a principle of fairness/justice. When a broader definition of utility is applied, a discursive process is needed to evaluate and rank the various aspects of utility. Basic questions regarding utility, fairness and discourse are reviewed in Section 3. Based on this discussion we have a critical look at the use of willingness to pay (WTP) for making priorities in safety work, and we also introduce an alternative concept denoted relative WTP. Further, the use of the so-called ‘Vision Zero’ (V-0) for traffic safety is briefly discussed. Section 4 presents a small-scale survey that has been carried out to assess people’s opinion on the priority setting of risk-reducing measures in transportation; thus giving actual WTP-values. Together with the basic ethical principles, this survey is used to give some further reflections on the above dilemmas.

We believe there is an increasing awareness that ethics is an important factor in safety work. In our view a triplet of concepts is essential in the process of priority setting for safety: discourse, fairness and utility. First, the decision process itself is important. It should be open for all views, and discussions should be informed in the sense that relevant information is made available to the public in an easily accessible form. Important and controversial decisions on transport safety should be taken on the basis of some discursive process, involving organizations and individuals, such as in the form of public meetings. The opinion of all citizens should to a reasonable degree be heard and have the same weight; thus, trying to avoid that powerful interest groups dominate the process. Further, the analysts should not reduce the decision problem to a mathematical exercise; based on various assumptions, which could conceal important aspects of the problem. A strict utilitarian approach, characterized by a pure mathematical formulation and solution, is not recommended. We rather advocate an approach where the quantitative risk results must be used in combination with (qualitative) considerations of various dimensions of utility. Thus, we recommend that utility and risk are defined in a broad sense, including various aspects of welfare. However, cost/benefit of various risk-reducing measures should be an important input to the decision process. The resource allocation should strive at reflecting the ethical values and sense of justice held by society, and we see fairness as an important aspect that must somehow be balanced against cost effectiveness (e.g. with respect to saving lives). It is neither seen as feasible nor desirable/fair to achieve absolute equality regarding transportation risk, but as a general rule society should try to achieve “a reasonable degree of” equality in their allocation of life-saving expenditure. That is, all citizens should have the same right to low risk, independent of wealth, power, influence in society, celebrity status, etc. In particular we oppose the views of some authors that more means should be spent on life-saving for the “wealthy”. However, departures from equality, in the sense of strict cost effectiveness with respect to life-saving expenditures, could be considered to be “fair”. When discussing this we should consider various dimensions of risk, also considering basic values (not meaning money) of society. Willingness to pay (WTP) could be used in this process, and our discussion suggests that departure from “equal spending” is relevant for traffic offenders, major accidents, public transport, children and heavily exposed groups We note that a utilitarian may oppose this statement, in particular regarding “heavily exposed groups”. Thus, utility measured by WTP could give useful input to the utility evaluations in society. But of course, the WTP should be based on actual observations, and not on some expert deciding what is best on behalf of the public. Using WTP we should also be aware of the distinction between “personal WTP” and “public WTP”. The last could be most relevant for governmental priority setting. We note that the questions in the referred survey have a rather general character, and the various income groups have rather similar priority setting. In this case the use of WTP could provide useful input. However, in our opinion WTP should be used with care when we consider safety measures for specific groups of people, where there could be conflicting interests. In this case personal wealth/income could be a factor, and it would be fairer to use relative WTP, (taking the person’s wealth into consideration). This approach will imply that the opinion of all is given a more equal weight, and so we recommend this. A main conclusion is that we should be very careful when choosing the definition of utility and risk, as this has a major impact on the priority setting. For instance, by either considering utility in terms of “life years saved” or as “number of lives saved” we affect the priority setting regarding children. In general, a “narrow” utilitarian approach, restricting to life-saving aspects, can give quite other results than an approach based on a broad definition of utility, and we suggest that the broader definition should often be preferred. Utility could even be defined in such a way that it promotes fairness, and in that case there does not need to be a major conflict between the utilitarians and those who focus on “fairness”. We do not believe that the use of the Rawlsian “veil of ignorance” is generally suitable for deciding on the “best” priority setting in practical safety work. It seems this veil can be used for various purposes. However, we find that the Rawlsian way of thinking provides good arguments in favour of considering fairness as an important aspect of safety work. Regarding the Vision Zero (V-0), this has put safety on the agenda, and can to some degree have vitalized traffic safety work. In particular its focus on avoiding major injuries and deaths is positive, demonstrating that it is particularly the intention to reduce the most important aspects of risk in road transportation. Otherwise, the contributions of V-0 to the priority setting of traffic safety work seem limited.