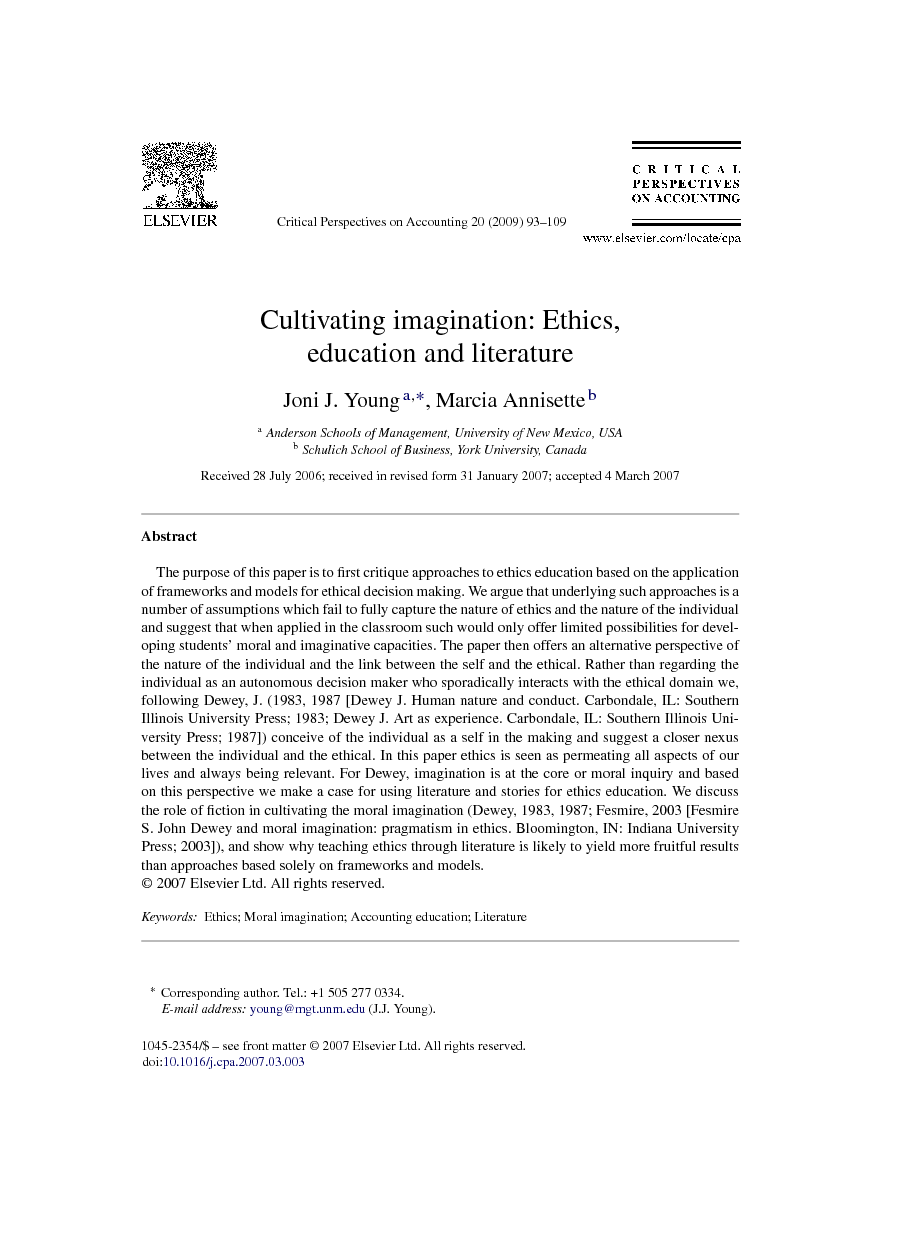 The purpose of this paper is to first critique approaches to ethics education based on the application of frameworks and models for ethical decision making. We argue that underlying such approaches is a number of assumptions which fail to fully capture the nature of ethics and the nature of the individual and suggest that when applied in the classroom such would only offer limited possibilities for developing students’ moral and imaginative capacities. The paper then offers an alternative perspective of the nature of the individual and the link between the self and the ethical. Rather than regarding the individual as an autonomous decision maker who sporadically interacts with the ethical domain we, following Dewey, J. (1983, 1987 [Dewey J. Human nature and conduct. Carbondale, IL: Southern Illinois University Press; 1983; Dewey J. Art as experience. Carbondale, IL: Southern Illinois University Press; 1987]) conceive of the individual as a self in the making and suggest a closer nexus between the individual and the ethical. In this paper ethics is seen as permeating all aspects of our lives and always being relevant. For Dewey, imagination is at the core or moral inquiry and based on this perspective we make a case for using literature and stories for ethics education. We discuss the role of fiction in cultivating the moral imagination (Dewey, 1983, 1987; Fesmire, 2003 [Fesmire S. John Dewey and moral imagination: pragmatism in ethics. Bloomington, IN: Indiana University Press; 2003]), and show why teaching ethics through literature is likely to yield more fruitful results than approaches based solely on frameworks and models.

With the disclosure of various corporate accounting scandals and continuing restatements of previously issued financial results, a heightened interest in the connections between accounting and ethics has emerged once more.1 This interest contributed to the passage of new rules such as the 2002 Sarbanes-Oxley legislation (U.S. Public Law 107–204) in an effort to alter certain accounting and auditing practices. This legislation included several provisions including one that attempted to enhance the “truthfulness” of corporate financial statements by requiring chief financial officers to certify that SEC filings presented fairly corporate results and financial condition and contained no untrue information or omission of material facts. Another provision tried to buttress the independence of auditors (and their willingness to question auditee accounting practices) by enacting rules to ban the provision of specific consulting products for auditees. Interest also turned towards the presentation and discussion of ethics within the business classroom. Sims and Felton (2006) for instance point out that “in Jan 2003 the AACSB proposed new standards suggesting that schools make teaching ethics a higher priority and move ethics to ‘first and foremost’ topical importance” (p. 29). More relevant to this paper has been the response by accounting regulators and educators to this call for increasing the teaching of ethics in the accounting classroom. Of particular note is the National Association of State Boards of Accountancy's (NASBA) recent exposure draft that proposed altering the coursework requirements for individuals who wish to take the CPA examination. These new requirements would specifically include six credit hours of coursework on ethics: “Education in ethical and professional responsibilities” means a program of learning that provides potential professional accountants with a framework of professional values, ethics and attitudes for exercising professional judgment and for acting in an ethical manner that is in the best interest of the public and the profession. This includes a commitment to comply with the codes of ethical conduct of State Boards of Accountancy and all those entities and organizations, including federal and state government entities and agencies, that promulgate standards of acceptable conduct. The process of ethics education should begin with broad philosophical concepts, followed by the application of these concepts in the world of business and accounting. An acceptable program of learning shall be as follows: (1) Three SCH in Ethical and Professional Responsibilities of CPAs; and (2) Three SCH in Ethical Foundations and Applications in Business.” (Proposed Rule 5.1(g) from NASBA web site.) Undoubtedly, an increased emphasis upon moral and ethical concepts and reasoning processes may prove beneficial to students. Greater attention to these may help our students (and us) to clarify and examine our approaches in resolving difficult issues. We can each likely recall instances in which we would have made different (and perhaps better) choices if we had better understood the mesh of conflicting obligations that constitutes our lives. While we agree that greater attention to ethics and morality can be helpful, we believe that the NASBA proposal with its insistence upon providing a “framework for exercising professional judgment” implicitly advocates a limited perspective for the purposes of ethics education, one that may limit the possible positive effects of such emphases for facilitating the development of our students’ critical and imaginative capacities. In the next section, we outline some assumptions about ethics and the individual implicit in the NASBA proposal's emphasis upon a framework and application of concepts. As well, we explore and discuss the limits associated with such an approach. We then contrast this approach with an alternative that envisions the individual as a self-in-the-making and stresses the importance of cultivating moral imagination. After outlining this alternative perspective, we explore some of its implications for ethics education and the potentialities for incorporating literature into our accounting classrooms to assist in cultivating moral imagination. Finally we close the paper with a few concluding comments.