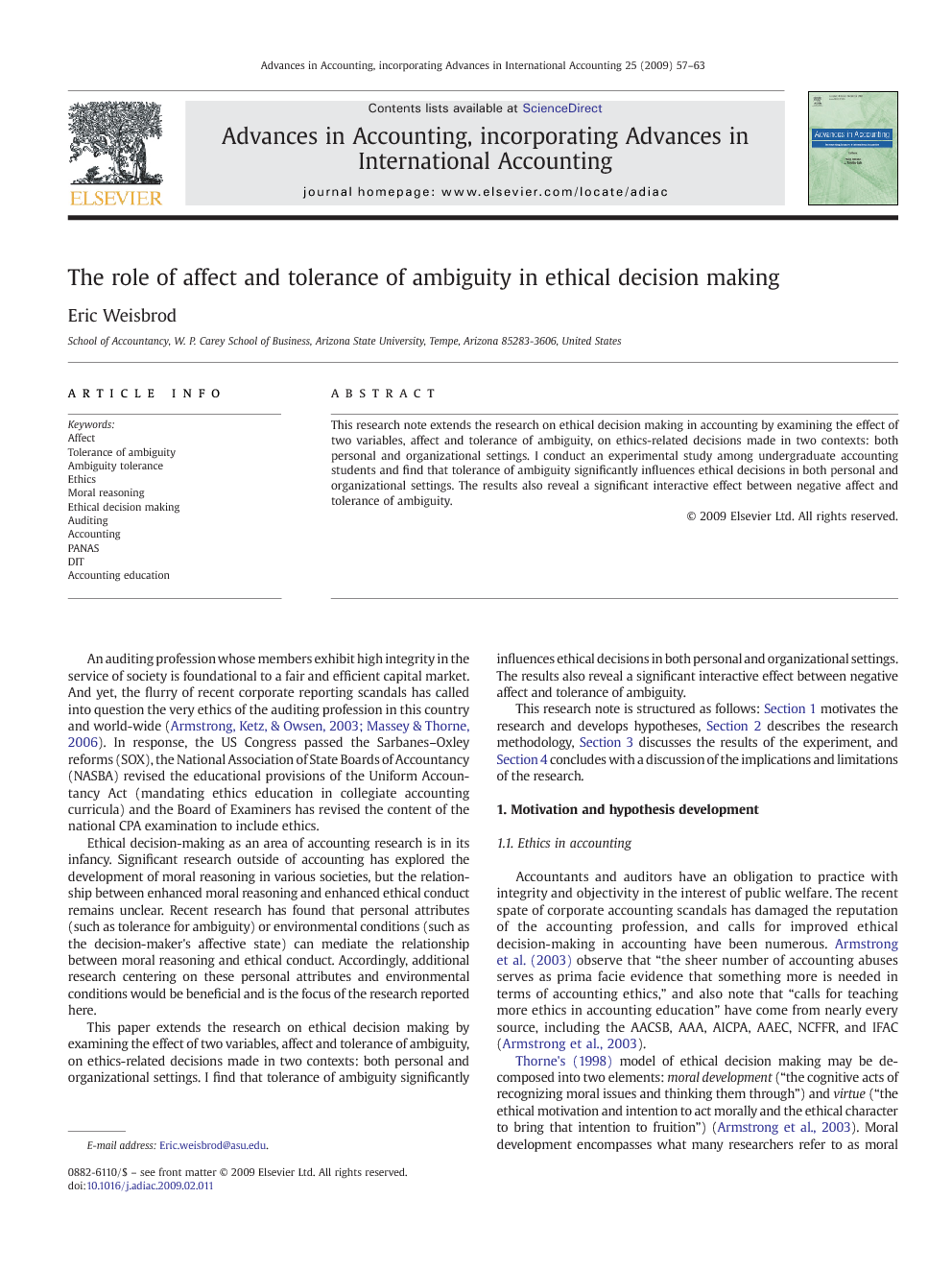 While ethics is clearly an important research area in accounting, prior research on the connection between moral reasoning and ethical behavior has yielded mixed results, indicating that we do not yet fully understand how people make ethical decisions. One explanation for the mixed results of past research is the existence of omitted (or non-controlled) correlated variables. In an effort to bridge this gap, this paper examines two personality attributes, affect and TOA, which prior literature has indicated may influence ethical decision making. While the results of this study are largely inconclusive, they shed light on an important area of accounting that has not been adequately researched. Furthermore, the student responses to the ethical scenarios indicate that a significant portion of accounting students are either unaware of ethical norms in the profession, or unsure of whether they would choose to adhere to those norms when presented with ethical dilemmas. I do not find evidence of the relationship between positive affect and ethical decision making predicted by Gaudine and Thorne (2001), however, the results of the study indicate that in some circumstances, negative affect may influence ethical behavior, but in others it may not. Future research should further explore the influence of negative affect and ethical decision making so that we can identify situations where negative affect may increase the likelihood of unethical behavior. I also find a significant relationship between tolerance of ambiguity and ethical decision making. This relationship may explain the cultural differences in ethical decision making documented in prior literature (Wong-on-Wing & Lui, 2007). Furthermore, I find a significant interaction between TOA and negative affect that has not yet been explored in the literature. Generally, all of my results imply that educators and practitioners may want to consider personality traits when determining ex-ante the most effective way to educate students about ethical decision making, and assessing ex-post the effectiveness of ethical learning outcomes and/or monitoring the evolution of ethical culture in the accounting practice. This study has several limitations. First, the study was conducted among undergraduate accounting students. Undergraduate accounting students were chosen as subjects in order to provide insight into the effectiveness of ethics education in accounting. The ethical decisions of undergraduate students, however, may not accurately represent the ethical decisions that practicing accounts make in real-world scenarios. Second, my experiment does not control for factors known to influence ethical decision making, such as gender, which may bias my results. It is also unclear whether subjects understood all of the scenarios. Forty-percent of subjects were either unsure or chose not to report a company's failure to disclose related party transactions, implying that some subjects may not have understood the nature or implications of related party transactions. The ethical scenarios used in my study have not been tested in prior literature, nor have they been established as reliable tools for measuring ethical decision making. Finally, I measure affect after subjects answered the ethical scenarios. Therefore, it is unclear whether I am measuring subjects' affective state when presented with the ethical scenarios, or whether I am measuring the affective state induced in the subjects by requiring them to face difficult ethical dilemmas. Future research should attempt to verify my results in a more controlled setting with a carefully designed research instrument.