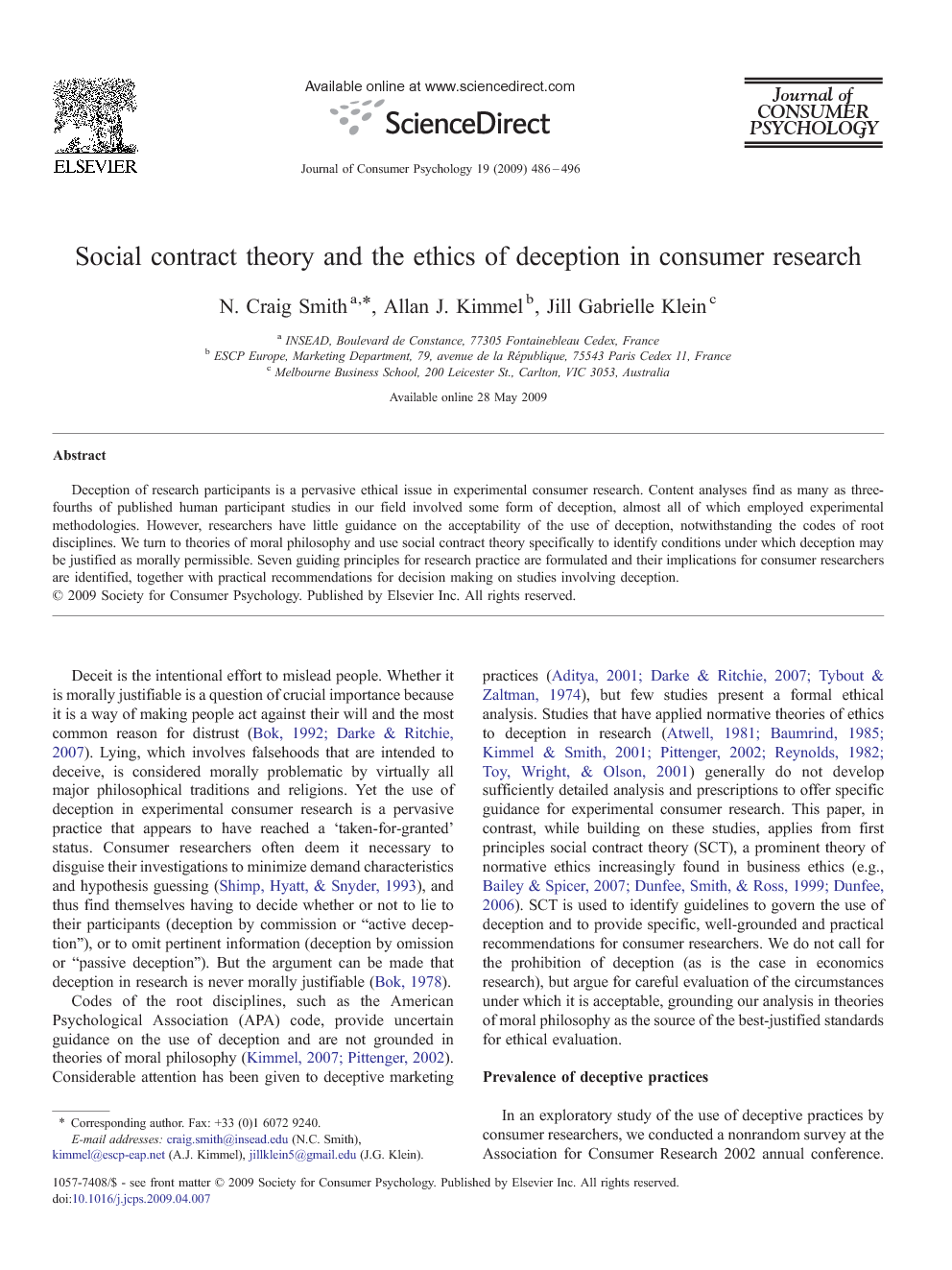 Deception of research participants is a pervasive ethical issue in experimental consumer research. Content analyses find as many as three-fourths of published human participant studies in our field involved some form of deception, almost all of which employed experimental methodologies. However, researchers have little guidance on the acceptability of the use of deception, notwithstanding the codes of root disciplines. We turn to theories of moral philosophy and use social contract theory specifically to identify conditions under which deception may be justified as morally permissible. Seven guiding principles for research practice are formulated and their implications for consumer researchers are identified, together with practical recommendations for decision making on studies involving deception.

The use of deception poses a dilemma for many consumer researchers; a dilemma relevant to IRB submissions, but also the fundamental individual responsibility of researchers, not least given the potential adverse consequences of severe deceptions. Our proposed solution is not without potential costs: it requires researchers to expend some additional effort and resources, it induces reviewers and editors to adjust perceptions of what constitutes good research, and it perhaps requires that some topics will not be investigated as thoroughly as is ideal. On the other hand, as consumer researchers we are not without the skills and creativity necessary to conduct research that is both ethical and valid. Our proposed principles, identified using SCT, provide the basis for well-grounded and practical recommendations on decisions about deception in experimental consumer research. There are some key assumptions we bring to our analysis, not least of which is that consumer research has social utility sufficient to justify some use of deception and that deception itself has social utility and can be morally permissible when consistent with certain principles. Research on cultural differences might suggest otherwise; for example, white lies deemed culturally acceptable in Euro-American cultures have been found to be less culturally acceptable in Ecuador (Mealy et al., 2007). While SCT has many strengths relative to alternative ethical theories, it also has certain limitations, especially the use of hypothetical consent. Quite conceivably, some of the proposed principles or their justificatory edifice might be questioned (we state what our contractors would reasonably agree on, subject to a veil of ignorance). However, the onus would be on the questioner to proffer countermanding principles with appropriate support. A further limitation stems from potential cultural differences influencing application of the principles (e.g., understanding vulnerability in a different culture consistent with Principle 6). One response would be to extend our analysis to incorporate ISCT (Donaldson & Dunfee, 1999) to better account for local norms. We offer experimental consumer researchers at least an initial solution to the dilemma of deception and a basis for justifying its use to themselves and others, such as IRBs. Potentially, this also may lessen the prospect of the consumer research field eventually having to deal with its own controversial studies akin to those that aroused such contentious debate in the root disciplines. Finally, our principles and recommendations may be useful to other relevant parties in the research process, including reviewers, journal editors and review board members, as well as to researchers using different methodologies in consumer research and, perhaps, in other fields.