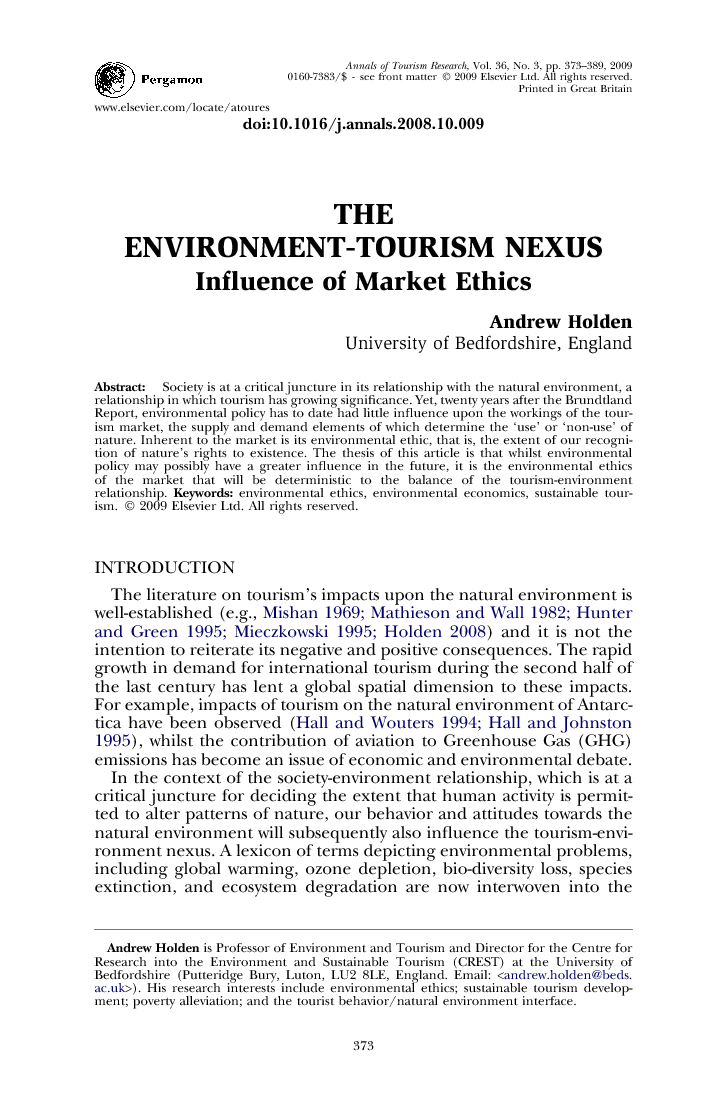 Society is at a critical juncture in its relationship with the natural environment, a relationship in which tourism has growing significance. Yet, twenty years after the Brundtland Report, environmental policy has to date had little influence upon the workings of the tourism market, the supply and demand elements of which determine the ‘use’ or ‘non-use’ of nature. Inherent to the market is its environmental ethic, that is, the extent of our recognition of nature’s rights to existence. The thesis of this article is that whilst environmental policy may possibly have a greater influence in the future, it is the environmental ethics of the market that will be deterministic to the balance of the tourism-environment relationship.

The literature on tourism’s impacts upon the natural environment is well-established (e.g., Mishan, 1969, Mathieson and Wall, 1982, Hunter and Green, 1995, Mieczkowski, 1995 and Holden, 2008) and it is not the intention to reiterate its negative and positive consequences. The rapid growth in demand for international tourism during the second half of the last century has lent a global spatial dimension to these impacts. For example, impacts of tourism on the natural environment of Antarctica have been observed (Hall and Wouters, 1994 and Hall and Johnston, 1995), whilst the contribution of aviation to Greenhouse Gas (GHG) emissions has become an issue of economic and environmental debate. In the context of the society-environment relationship, which is at a critical juncture for deciding the extent that human activity is permitted to alter patterns of nature, our behavior and attitudes towards the natural environment will subsequently also influence the tourism-environment nexus. A lexicon of terms depicting environmental problems, including global warming, ozone depletion, bio-diversity loss, species extinction, and ecosystem degradation are now interwoven into the discourse of global society. Scientific evidence suggests that these changes are a consequence of human activity rather than natural processes (Stern Report, 2006 and IPCC, 2007). Significantly, these changes in the natural environment also present a threat to the “ecosystem services” upon which our well-being depends (Millennium Ecosystem Assessment 2005). These ecosystem services include: “provisioning services” for example, food and water; “regulating services” for example, climate and flood control; “cultural services” that offer recreational, aesthetic and spiritual benefits; and “supporting services”, for example, photosynthesis and nutrient recycling (ibid.). Evidently the raison d’être of tourism is closely linked with cultural services but it is ultimately dependent upon the other ecosystem services, that is, recreational benefit is less likely to be obtained if there is a reduction in the quality of provisioning, regulating and supporting services. Subsequently, the tourism-environment relationship can be understood as being reciprocal, tourism influencing environmental well-being which in turn impacts upon the characteristics and quality of tourism. The predicted numerical and spatial growth of tourism, the United Nations World Tourism Organization (UNWTO 2007) forecast an increase in international tourism arrivals from a current level of approximately 800 million per annum to 1.6 billion per annum by 2020, implies that tourism will have an increasing global significance as a user of natural resources in the future. Tourism’s relationship with the natural environment is made complex through the involvement of a diversity of stakeholders, the variance of the spatial dimension of its activities, a lack of clear definition of key conceptual themes, and the subsequent difficulties of the systematic planning of its development. For example, whilst most stakeholders in tourism would probably agree that “sustainable tourism development” is a desirable goal, the variety of interpretations of what it actually is, typically lends it a reductionist approach, limited to isolated examples of environmental initiatives and improvements undertaken by tour operators, hotel groups or destinations. This shared observation of the limitations of sustainable tourism leads Saarinen (2006:1133) to ask: “Are the present local solutions to global challenges enough, and do they represent all that tourism can do?” Thus, twenty years after the publication of the Brundtland Report (WCED 1987), the subsequent advocating of sustainable tourism by international agencies including the United Nations World Tourism Organization (UNWTO), United Nations Environment Program (UNEP), United Nations Educational, Scientific and Cultural Organization (UNESCO), the European Union (EU), and the World Development Bank, the extent to which tourism’s relationship with the natural environment has “improved”, however we choose to conceptualize and measure it, is debatable and contentious. With reference to a list of rhetorical questions concerning the success of the mitigation of the negative environmental impacts of mass tourism, including; whether the majority of hotels and other tourism companies had now adopted environmental management systems; natural resource usage had been minimized and the treatment of effluent is common practice; the hundreds of millions of tourists traveling around the world had an awareness of the impacts of their consumption patterns and behavior, a senior representative of the UNWTO comments: “It would certainly be naive to pretend to give a purely positive answer to all these questions… Progress towards sustainable development of tourism is hardly satisfactory while sustainable practices are restricted to a few niche markets, with the rest of the tourism industry keeping its priorities clearly on profit rather than sustainability” (Younis 2003:13). It is subsequently argued that environmental and sustainable tourism policy has had relatively little influence on the workings of the tourism market, the main mechanism for deciding how the natural environment and resources will be used for tourism. Subsequently, when considering the future of the tourism-environment relationship, it is necessary to observe the dynamics of the market, the workings of which will be critical in determining the balance of a symbiotic or destructive tourism-environment relationship.