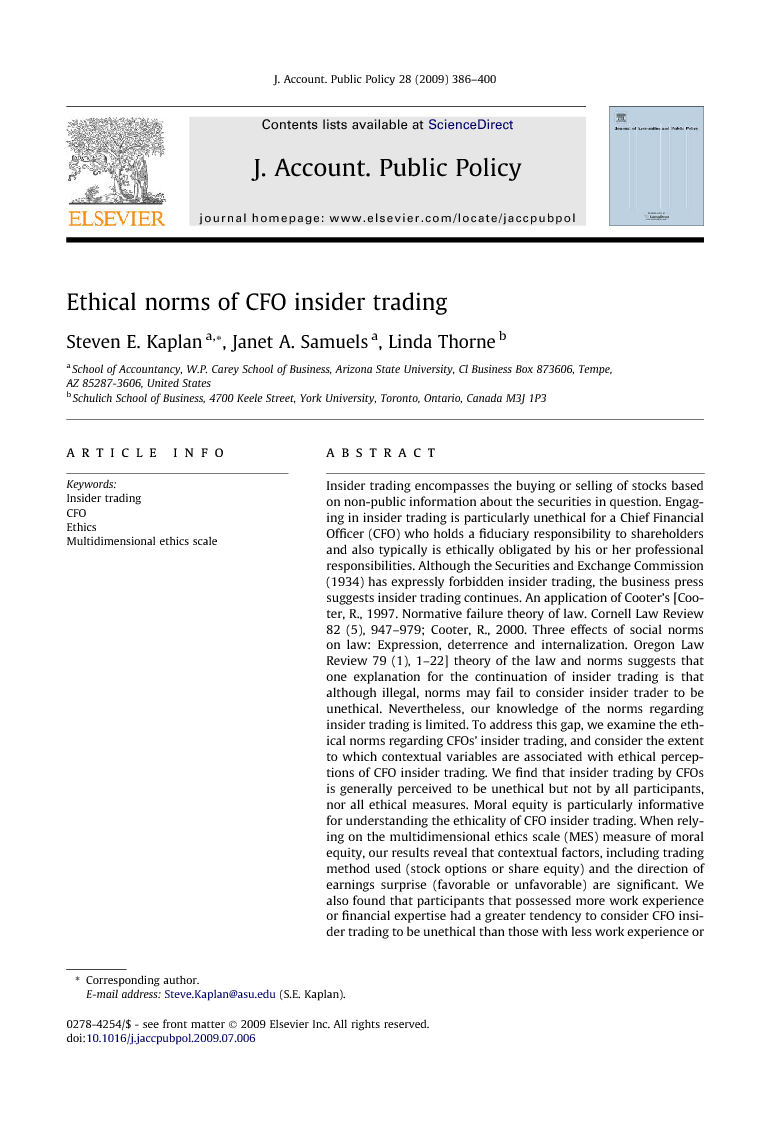 Insider trading encompasses the buying or selling of stocks based on non-public information about the securities in question. Engaging in insider trading is particularly unethical for a Chief Financial Officer (CFO) who holds a fiduciary responsibility to shareholders and also typically is ethically obligated by his or her professional responsibilities. Although the Securities and Exchange Commission (1934) has expressly forbidden insider trading, the business press suggests insider trading continues. An application of Cooter’s [Cooter, R., 1997. Normative failure theory of law. Cornell Law Review 82 (5), 947–979; Cooter, R., 2000. Three effects of social norms on law: Expression, deterrence and internalization. Oregon Law Review 79 (1), 1–22] theory of the law and norms suggests that one explanation for the continuation of insider trading is that although illegal, norms may fail to consider insider trader to be unethical. Nevertheless, our knowledge of the norms regarding insider trading is limited. To address this gap, we examine the ethical norms regarding CFOs’ insider trading, and consider the extent to which contextual variables are associated with ethical perceptions of CFO insider trading. We find that insider trading by CFOs is generally perceived to be unethical but not by all participants, nor all ethical measures. Moral equity is particularly informative for understanding the ethicality of CFO insider trading. When relying on the multidimensional ethics scale (MES) measure of moral equity, our results reveal that contextual factors, including trading method used (stock options or share equity) and the direction of earnings surprise (favorable or unfavorable) are significant. We also found that participants that possessed more work experience or financial expertise had a greater tendency to consider CFO insider trading to be unethical than those with less work experience or financial expertise, which suggests the importance of training and education of the general public. In addition, our findings suggest that tougher sanctions will encourage compliance with existing insider trading laws. Implications of our findings for public policy are discussed.

Levitt (1998, p. 3), in his role as Chairman of the Securities and Exchange Committee (SEC), commented on the importance of prohibiting insider trading: Trading based on privileged access to information can demoralize investors and destabilize investment. It has utterly no place in any fair-minded, law-abiding economy. It’s a chronic danger. It’s all too evident in today’s marketplace. …. The American people see it, bluntly, as a form of cheating. They – along with the S.E.C. – have zero tolerance for the crime of insider trading. Insider trading encompasses the buying or selling of stocks based on non-public information about the securities in question. Corporate insider trading based on privileged information is a violation of the Securities Act of 1934 (Meulbroek, 1992, p. 1664). Nevertheless, the popular press (Zuckerman and Anand, 2007, Scannell, 2007 and Searcey et al., 2007) as well as academic research provides evidence of the continuation of insider trading even by those who hold fiduciary and professional responsibilities, including Chief Financial Officers (CFOs) (Huddart et al., 2007, Lustgarten and Mande, 1995 and Park and Park, 2004). To the extent that insider trading can “demoralize investors and destabilize investment” (Levitt, 1998, p. 3), the evidence of continued insider trading is troubling and suggests additional steps may be needed to curb insider trading. Policy makers’ interest in insider trading is stimulated, in part, because decisions about whether and how to regulate insider trading are central to the welfare of the economy at large (Salbu, 1995, p. 314). Legal scholars (Cooter, 2000, Robinson, 2000 and Stout, 2006) recognize the interplay between norms and the law in curbing undesirable behavior. According to the theory of norms and the law (Cooter, 2000, p. 20), violations of laws (such as insider trading) are more than legal and economic decisions but also involve social and ethical considerations. In this regard, Statman (2004, p. 34) states that “rules of fairness in the financial markets are an outcome of a process that involves the entire community.” While various definitions exist, norms are generally considered to reflect beliefs or standards that are understood by members of a group or society that guide and/or constrain individual behavior (Cialdini and Trost, 1998, p. 152).1 Using correspondent inference theory (Jones and McGillis, 1976, pp. 390–398), norms play a role in the extent to which members of society are expected to make correspondent inferences about an individual who engages in an illegal behavior, which, in turn, will direct the social sanctions. Thus, norms are viewed as important for two reasons. First, norms are likely to influence the formation and effectiveness of the law, and consequently, the probability of detection and criminal penalty, if convicted (Cooter, 2000, p. 20). For example, norms influence the extent to which society members are expected to inform authorities if they learn about illegal behavior. Second, in the absence of detection by legal authorities, norms influence the extent to which individuals engaging in illegal behavior suffer social sanctions such as a loss in reputation and opportunities (Ellickson, 1991 and Cooter, 1997). Within the theory of norms and the law (Cooter, 2000, pp. 21–22), norms about the extent to which insider trading is perceived as unethical are expected to play a central role, in part, because they direct and guide views about legal and non-legal sanctions. While an individual’s perceptions reflect one’s own self-based beliefs and standards, collectively, individuals’ perceptions form ethical norms, which are the basis of the social consensus for various behaviors (Jones, 1991 and Mackenzie, 2004). Accordingly, our study examines the ethical norms regarding CFOs’ insider trading, and considers the extent to which contextual factors may be associated with these norms. Our study focuses on the insider trading of a CFO for a publicly traded company. CFOs of publicly traded companies have access to private information about their companies. By virtue of being a member of the executive group of a public company, CFOs have fiduciary and professional responsibilities to a broad range of stakeholders, which have been codified in law (Johnson, 2007, p. 147). According to the Securities Act of 1934, it is illegal for CFOs, like other insiders, to trade based on their inside knowledge (Anonymous, 1997 and Blackman, 1998). An experiment was used to examine the ethical perceptions of CFOs’ insider trading and consider the extent to which contextual variables are associated with ethical perceptions of CFO insider trading. To capture the ethical norms of the broader investment community, participants were working professionals (evening MBA students). Although insider trading by CFOs is generally perceived to be unethical, a surprising percentage of our participants perceived insider trading not to be unethical. We find that insider trading by CFOs generally is perceived to be unethical but not by all participants, nor all ethical measures. Moral equity is particularly informative for understanding the ethicality of CFO insider trading. When relying on the multidimensional ethics scale (MES) measure of moral equity, our results reveal that contextual factors, including trading method used (options or equity) and direction of earnings surprise (favorable or unfavorable) are significant. We also find participants that possessed more work experience and financial statement expertise had a greater tendency to consider CFO insider trading to be unethical, which suggests that continued education and training may contribute toward strengthening the social intolerance toward CFO insider trading. Our paper contributes to the literature by applying the theory of norms and the law to the domain of insider trading and extending the theory of norms and the law by focusing on ethical norms. We further extend this literature by examining the extent to which accounting related variables may influence ethical norms held by individuals. This paper is organized as follows. The next section considers the legislation and incidence of insider trading and presents the theory of norms and the law (Cooter, 2000, pp. 1–3) to explain the continued incidence of insider trading today. This is followed by a presentation of the research method and design, followed by the results, and a discussion of the implications of the findings.