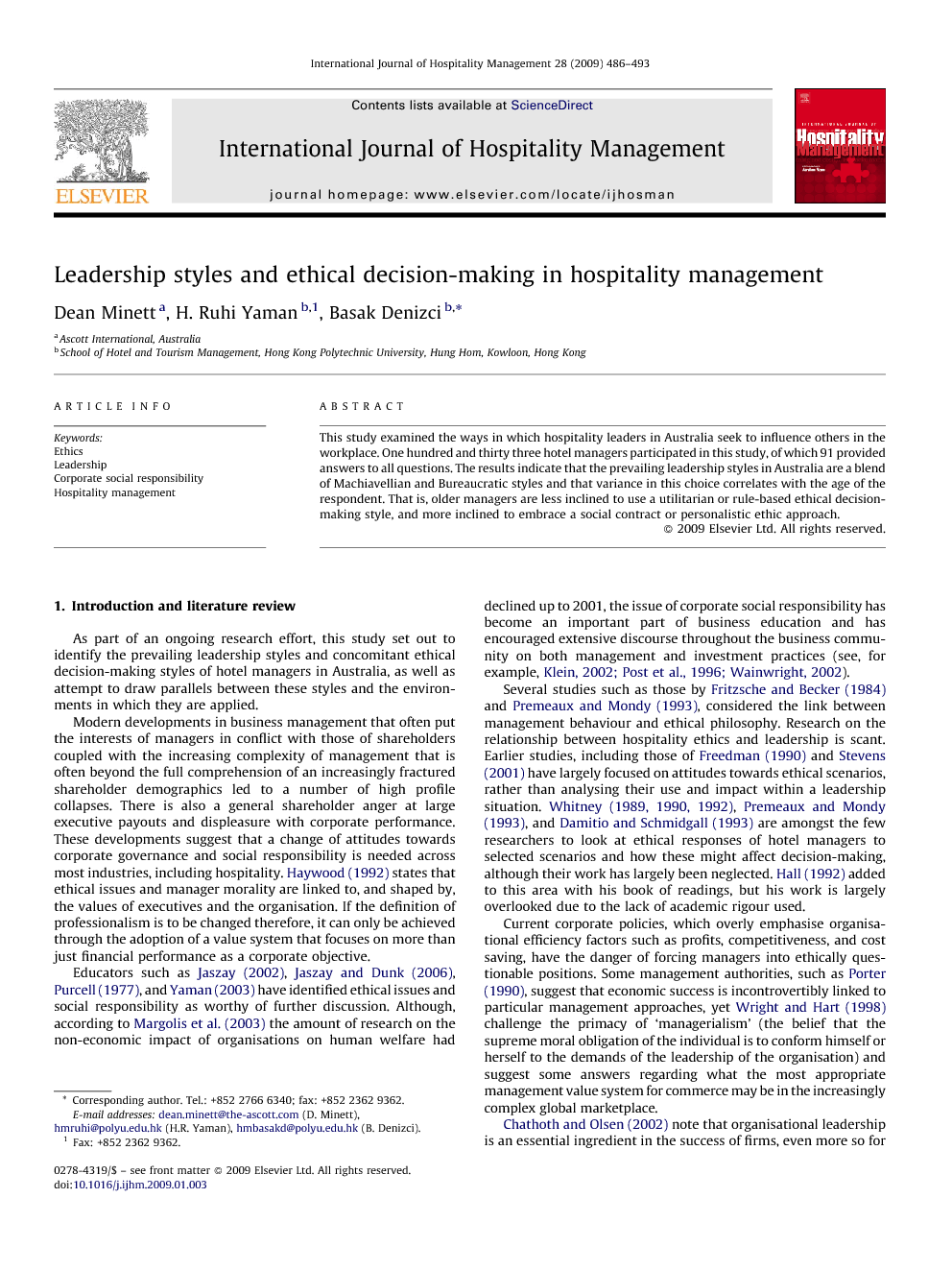 This study examined the ways in which hospitality leaders in Australia seek to influence others in the workplace. One hundred and thirty three hotel managers participated in this study, of which 91 provided answers to all questions. The results indicate that the prevailing leadership styles in Australia are a blend of Machiavellian and Bureaucratic styles and that variance in this choice correlates with the age of the respondent. That is, older managers are less inclined to use a utilitarian or rule-based ethical decision-making style, and more inclined to embrace a social contract or personalistic ethic approach.

This research intends to assess the leadership styles of managers in the hospitality industry and, by doing so, to also deduce their likely ethical decision-making style. This study examined managers of a supervisory level and above to determine the ethical decision-making style of hospitality industry managers. Respondents came from a variety of organisations with varying levels of responsibility and experience and were an even mix of ages and genders. The results indicate that the leadership style, and hence ethical decision-making style, of managers varies only according to age of the respondent. There is no significant variation according to gender, years of experience, position held in the organisation or level of education achieved. The fact that a Machiavellian/Bureaucratic leadership style (and hence a Utilitarian decision-making style) is found more in younger managers may be due to younger managers being less prepared to wait for promotion and hence see manipulation as an acceptable tool by which to progress their career. The fact that the style is used less by older managers may be attributed to advanced moral development, however, it may also be attributed to the desire of the manager to create less waves as they get closer to the socially expected date of retirement. Another plausible explanation might be “confidence” factor. Younger managers might be less confident and more prone to Bureaucratic and Machiavellian styles, whilst older managers have more self-confidence and thereby confidence in their subordinates. The findings suggest that the difference is more likely to be the advance in moral development, as evidenced by those under 25 years of age being more likely to use the amalgam of Machiavellian and Bureaucratic leadership styles, than those between 26 and 40 years of age and much more likely than those over 41 years of age. Similarly, that those between 26 and 40 years of age are much more likely to use Machiavellian style with a touch of Bureaucratic style than those over 41 years of age. This shows a clearly declining use of a Machiavellian/Bureaucratic style with age. Although there was a reasonably even spread between genders in this study, females held lower managerial positions than males. This context effect might have influenced the link between gender and use of transformational leadership style. This paper is limited by using Hitt's model to investigate the relationship between the leadership styles and ethical decision-making orientations of managers in the hospitality industry. There are also other important factors that are relevant to the discussion and were not addressed in the present study. Further research should explore the influence of alternative variables on leadership styles, such as communication styles. Hospitality as a commercial endeavour has recently been described as “providing accommodation and/or food and/or drink through a voluntary human exchange, which is contemporaneous in nature and undertaken to enhance the mutual well-being of the parties concerned” (Brotherton and Wood, 2000, p.143). When comparing these findings with this definition and history of the hospitality industry, it appears as though the provision of services that are based on ‘voluntary human exchange’ and undertaken to enhance the well-being of the parties concerned, are in danger of being bypassed by younger managers in favour of a purely economic, or self-interested imperative. Although this may be an acceptable outcome for those employees driving this change, current managers and other stakeholders interested in the long-term viability of their respective businesses will do well to consider the impact of these changes now.