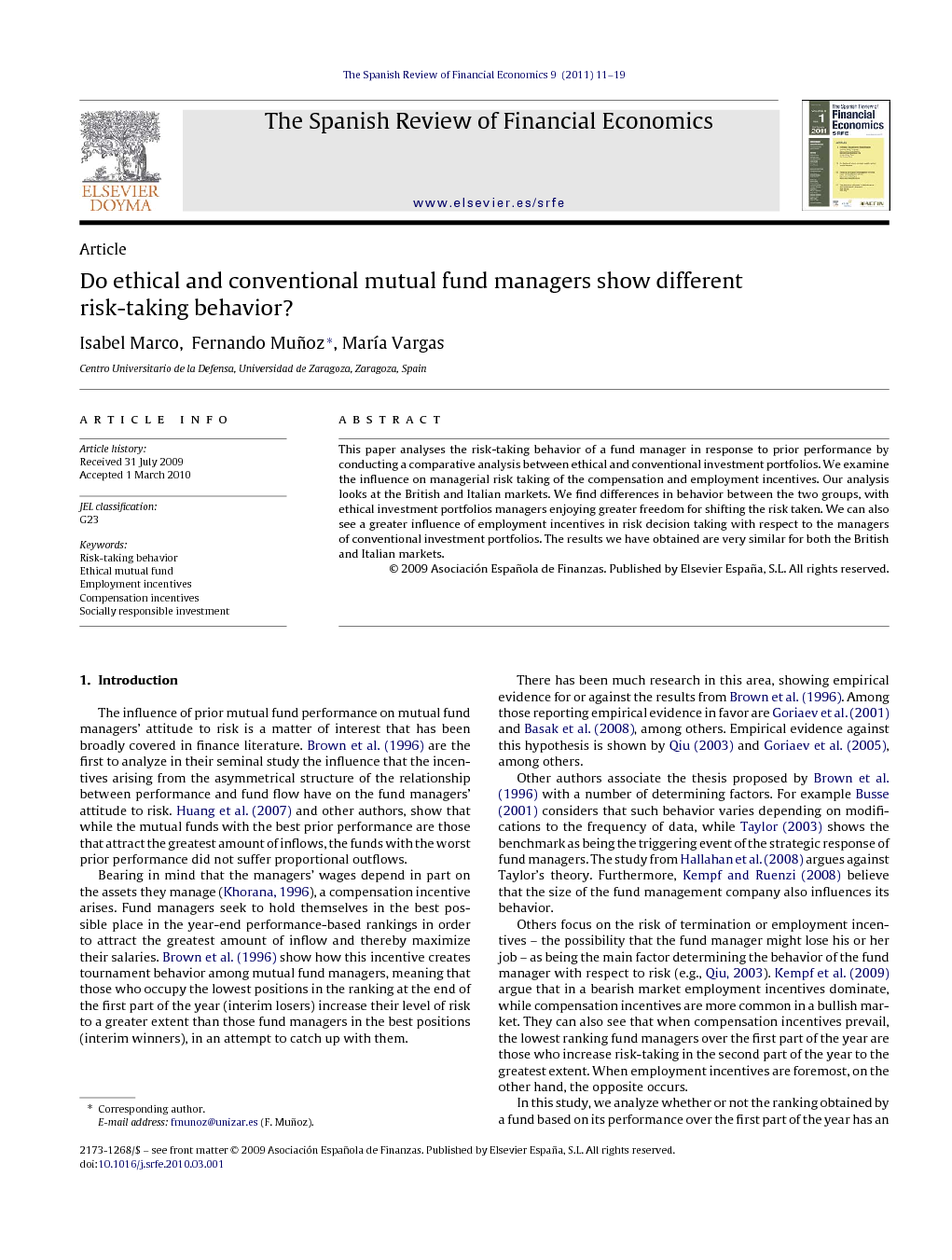 This paper analyses the risk-taking behavior of a fund manager in response to prior performance by conducting a comparative analysis between ethical and conventional investment portfolios. We examine the influence on managerial risk taking of the compensation and employment incentives. Our analysis looks at the British and Italian markets. We find differences in behavior between the two groups, with ethical investment portfolios managers enjoying greater freedom for shifting the risk taken. We can also see a greater influence of employment incentives in risk decision taking with respect to the managers of conventional investment portfolios. The results we have obtained are very similar for both the British and Italian markets.

The influence of prior mutual fund performance on mutual fund managers’ attitude to risk is a matter of interest that has been broadly covered in finance literature. Brown et al. (1996) are the first to analyze in their seminal study the influence that the incentives arising from the asymmetrical structure of the relationship between performance and fund flow have on the fund managers’ attitude to risk. Huang et al. (2007) and other authors, show that while the mutual funds with the best prior performance are those that attract the greatest amount of inflows, the funds with the worst prior performance did not suffer proportional outflows. Bearing in mind that the managers’ wages depend in part on the assets they manage (Khorana, 1996), a compensation incentive arises. Fund managers seek to hold themselves in the best possible place in the year-end performance-based rankings in order to attract the greatest amount of inflow and thereby maximize their salaries. Brown et al. (1996) show how this incentive creates tournament behavior among mutual fund managers, meaning that those who occupy the lowest positions in the ranking at the end of the first part of the year (interim losers) increase their level of risk to a greater extent than those fund managers in the best positions (interim winners), in an attempt to catch up with them. There has been much research in this area, showing empirical evidence for or against the results from Brown et al. (1996). Among those reporting empirical evidence in favor are Goriaev et al. (2001) and Basak et al. (2008), among others. Empirical evidence against this hypothesis is shown by Qiu (2003) and Goriaev et al. (2005), among others. Other authors associate the thesis proposed by Brown et al. (1996) with a number of determining factors. For example Busse (2001) considers that such behavior varies depending on modifications to the frequency of data, while Taylor (2003) shows the benchmark as being the triggering event of the strategic response of fund managers. The study from Hallahan et al. (2008) argues against Taylor's theory. Furthermore, Kempf and Ruenzi (2008) believe that the size of the fund management company also influences its behavior. Others focus on the risk of termination or employment incentives – the possibility that the fund manager might lose his or her job – as being the main factor determining the behavior of the fund manager with respect to risk (e.g., Qiu, 2003). Kempf et al. (2009) argue that in a bearish market employment incentives dominate, while compensation incentives are more common in a bullish market. They can also see that when compensation incentives prevail, the lowest ranking fund managers over the first part of the year are those who increase risk-taking in the second part of the year to the greatest extent. When employment incentives are foremost, on the other hand, the opposite occurs. In this study, we analyze whether or not the ranking obtained by a fund based on its performance over the first part of the year has an influence on behavior, compared to the risk taken by the fund manager in the second part of the year. We conduct this analysis from the perspective of a comparison between ethical and conventional mutual funds. We also extend the analysis to examine whether or not there is a difference in behavior depending on whether compensation or employment incentives dominate and whether or not both types of incentives influence mutual fund managers in the same way, regardless of whether they manage ethical or conventional funds. The most interesting point of this study is the comparative analysis of risk-taking behavior of conventional and ethical fund managers in response to prior performance, as to the best of our knowledge no prior research examines this matter in the case of socially responsible mutual funds. The boom in recent years of ethical mutual funds both in Europe and elsewhere highlights the importance of examining the behavior of fund managers and investors in mutual funds of this nature. Furthermore, bearing in mind that ethical funds not only pursue financial interests but also have more socially orientated objectives, it is reasonable to surmise that their behavior differs in certain aspects. With respect to ethical mutual funds, the topic most frequently analyzed by researchers is a comparison of their financial performance with that of conventional investment funds. Certain authors have found evidence in favor of ethical funds (e.g., Derwall and Koedijk, 2009), while others have presented evidence to the contrary, (e.g., Renneboog et al., 2008). There is also research that argues that there are no significant differences in the levels of financial performance of both types of funds, as proposed by Cummings, 2000 and Kreandert et al., 2005; and Bauer et al. (2007). Behavioral finance literature also examines socially responsible investment. Such is the case of research that examined the behavior of investors, as seen in Geczy et al. (2003), Renneboog et al., forthcoming and Renneboog et al., 2007, and Bollen (2007). Investor behavior is of particular interest in our paper, and it further justifies the comparative study of ethical and conventional fund managers. The fact that the ethical mutual fund investor shows himself as more sensitive to positive prior performance and less sensitive to negative prior performance suggests a structure that is even more asymmetrical, in the performance-fund flow relationship, and thus there are even greater incentives for fund managers to take on additional risk. In other words, ethical mutual fund managers enjoy greater flexibility to modify the risk taken. The remainder of the paper is structured as follows. In the second section, we explain the growing importance of the ethical mutual fund industry, especially in the two countries we study. Section 3 describes the database used in our analysis. Section 4 presents our methodology. Section 5 provides empirical results. Section 6 contains a series of tests to confirm the robustness of the findings. Finally, Section 7 concludes.

In this paper, we analyzed the risk-taking behavior of mutual fund managers in response to prior performance. This is an area that has been widely studied, with extensive published research on fund manager and investor behavior. Nevertheless, to the best of our knowledge, a comparison has never been conducted between the behavior of ethical and conventional fund managers, the cornerstone of this study, which focused on funds operating in British and Italian markets. We also examined how compensation and employment incentives affect conventional and ethical fund managers. Our results allowed us to confirm the importance of this comparative study between the two types of mutual fund managers, as widely differing conclusions have been reached on the behavior observed between them. The incentives that determine the level of risk exposure and that arise from the asymmetric structure of the performance–flow relationship are more intense in the case of ethical funds, which suggest that ethical fund managers are influenced by the prior performance of funds when taking risk-related decisions in a different way to the managers of conventional funds. In fact, ethical fund investors tend to be more sensitive to prior positive returns, yet less sensitive to negative returns when making decisions regarding asset allocation. In our preliminary analysis, we saw weak evidence of strategic tournament behavior for British conventional global equity funds and the absence of prior performance having any influence on risk-taking behavior in various aspects of our study (British ethical global equity funds and Italian conventional and ethical global equity funds). However, by explicitly considering employment incentives, we observed strategic tournament behavior for both conventional and ethical mutual funds and for both the Italian and British markets. Nonetheless, the comparison of the size of the coefficients provided us with empirical evidence that suggested a difference in the behavior depending on whether compensation or employment incentives dominate and whether the fund is conventional or ethical. Strategic tournament behavior of far greater significance is observed when employment incentives are foremost, which can be explained by the fear that interim losers have of losing their jobs. In the case of the British market, we should highlight the effect that employment incentives have on interim losers, who do not increase their risk exposure as much as interim winners due to their fear to loss their jobs. This effect is not as noteworthy in the case of ethical fund managers. An analysis of the periods in which compensation incentives dominate indicates that ethical interim losers enjoy greater freedom to modify the levels of risk exposure than their conventional counterparts, a fact demonstrated by the existence of a positive coefficient, although less than that found for conventional fund managers and close to zero. This same pattern of behavior can also be seen for the Italian market, although to a lesser extent. The robustness tests we carried out confirmed the consistency of our results.