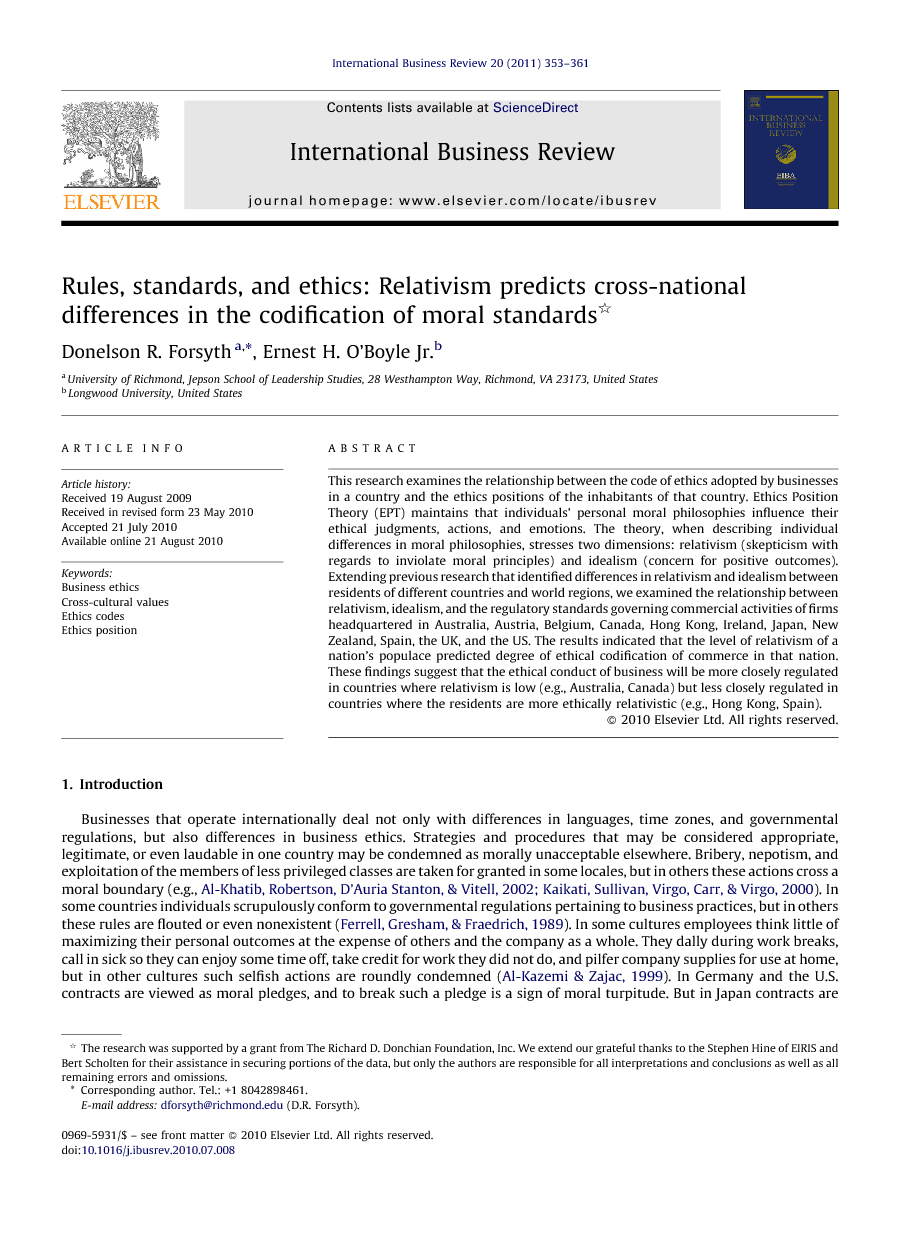 This research examines the relationship between the code of ethics adopted by businesses in a country and the ethics positions of the inhabitants of that country. Ethics Position Theory (EPT) maintains that individuals’ personal moral philosophies influence their ethical judgments, actions, and emotions. The theory, when describing individual differences in moral philosophies, stresses two dimensions: relativism (skepticism with regards to inviolate moral principles) and idealism (concern for positive outcomes). Extending previous research that identified differences in relativism and idealism between residents of different countries and world regions, we examined the relationship between relativism, idealism, and the regulatory standards governing commercial activities of firms headquartered in Australia, Austria, Belgium, Canada, Hong Kong, Ireland, Japan, New Zealand, Spain, the UK, and the US. The results indicated that the level of relativism of a nation's populace predicted degree of ethical codification of commerce in that nation. These findings suggest that the ethical conduct of business will be more closely regulated in countries where relativism is low (e.g., Australia, Canada) but less closely regulated in countries where the residents are more ethically relativistic (e.g., Hong Kong, Spain).

Businesses that operate internationally deal not only with differences in languages, time zones, and governmental regulations, but also differences in business ethics. Strategies and procedures that may be considered appropriate, legitimate, or even laudable in one country may be condemned as morally unacceptable elsewhere. Bribery, nepotism, and exploitation of the members of less privileged classes are taken for granted in some locales, but in others these actions cross a moral boundary (e.g., Al-Khatib et al., 2002 and Kaikati et al., 2000). In some countries individuals scrupulously conform to governmental regulations pertaining to business practices, but in others these rules are flouted or even nonexistent (Ferrell, Gresham, & Fraedrich, 1989). In some cultures employees think little of maximizing their personal outcomes at the expense of others and the company as a whole. They dally during work breaks, call in sick so they can enjoy some time off, take credit for work they did not do, and pilfer company supplies for use at home, but in other cultures such selfish actions are roundly condemned (Al-Kazemi & Zajac, 1999). In Germany and the U.S. contracts are viewed as moral pledges, and to break such a pledge is a sign of moral turpitude. But in Japan contracts are practical commitments rather than morally charged prescriptions, and they often include a jiji henco clause permitting renegotiation should circumstances change (Mitchell, 2003). A number of factors undoubtedly combine to create cultural variations in business ethics—religious traditions (e.g., Cornwell et al., 2005), cultural complexity (e.g., Trigger, 2003), historical and economic circumstances (e.g., Kluckholm, 1951), and cultural dimensions (e.g., individualism, power distance, masculinity, uncertainty avoidance, and long-term orientation; Hofstede, 1980)—but the current work examines one specific determinant of these variations in ethics: individual and cultural differences in ethical ideology. The analysis is based on Ethics Position Theory, or EPT, which assumes that individuals’ ethical judgments, actions, and emotions are influenced by their dispositional concern for others’ well-being (termed idealism in the theory) and their skepticism with regards to inviolate, trans-situational moral principles (termed relativism in the theory). Forsyth, 1980 and Forsyth, 1992 developed this theory to explain individual differences in morality, but researchers have identified consistent cross-national differences in idealism and relativism. Al-Khatib, Stanton, and Rawwas (2005), for example, discovered that residents of Saudi Arabia were significantly more idealistic than Kuwaitis or Omanis. Robertson, Gilley, and Street (2003), in a study of employees in various industries and organizations, reported that Russians were more relativistic than their counterparts in the U.S. In the current study we investigated these country-by-country variations in idealism and relativism to determine if they are related to variations in regulatory standards pertaining to business ethics. Those conducting business in international contexts may seek to comport themselves in ways that are consistent with the ethical standards of the country where they do business, but as they move from one country to another they often encounter pronounced differences in regulations pertaining to such practices as bribery, the rights of employees, and the protection of the environment. Here we test EPT's explanation of these variations by examining the codification of ethical standards in 11 nations: Australia, Austria, Belgium, Canada, Hong Kong, Ireland, Japan, New Zealand, Spain, the UK, and the US. We predict that (a) the codes that govern the ethics of business practices will be less extensive in countries where citizens are more relativistic and that (b) these codes will include human rights protections in countries where citizens are relatively idealistic.