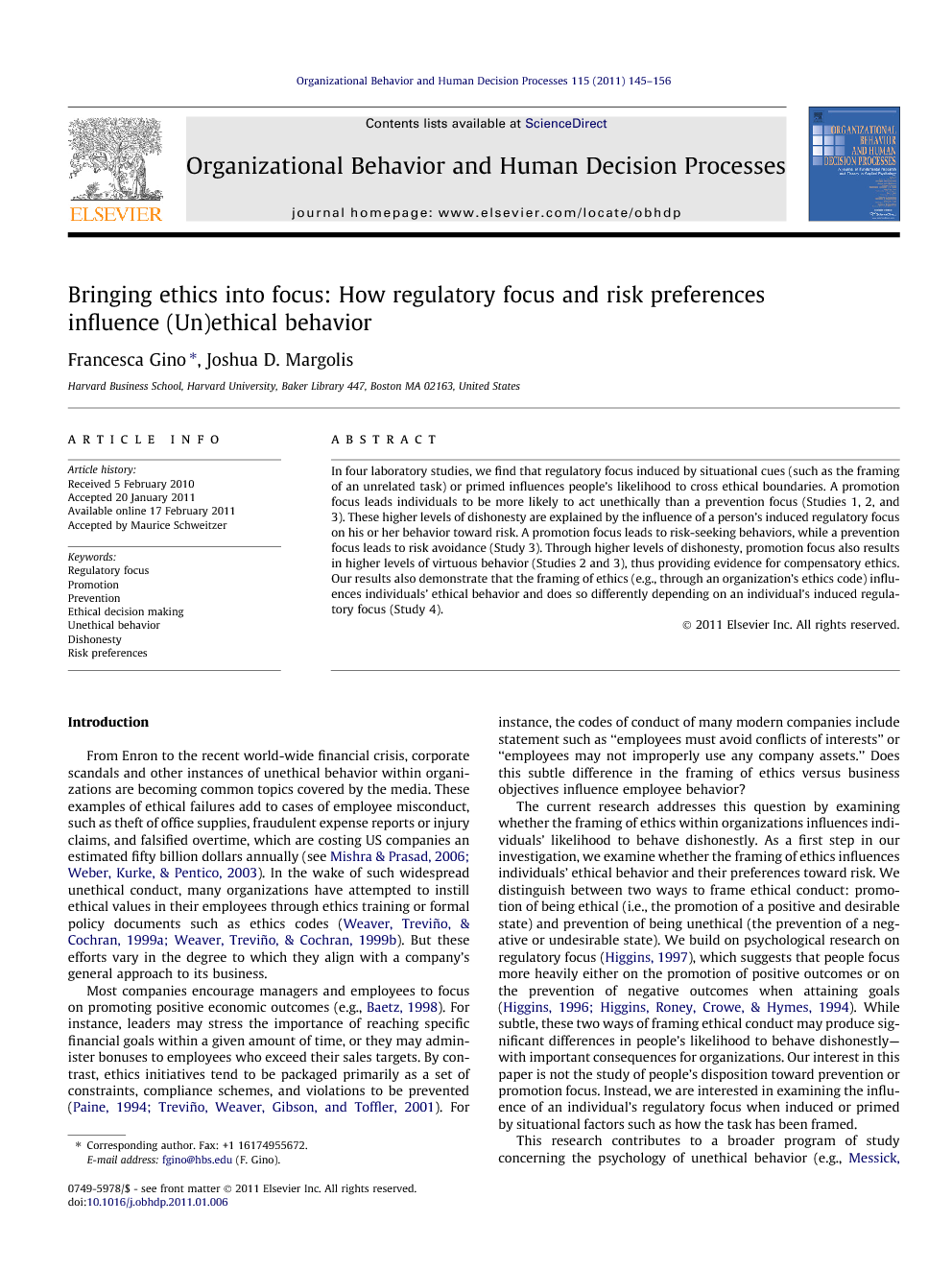 In four laboratory studies, we find that regulatory focus induced by situational cues (such as the framing of an unrelated task) or primed influences people’s likelihood to cross ethical boundaries. A promotion focus leads individuals to be more likely to act unethically than a prevention focus (Studies 1, 2, and 3). These higher levels of dishonesty are explained by the influence of a person’s induced regulatory focus on his or her behavior toward risk. A promotion focus leads to risk-seeking behaviors, while a prevention focus leads to risk avoidance (Study 3). Through higher levels of dishonesty, promotion focus also results in higher levels of virtuous behavior (Studies 2 and 3), thus providing evidence for compensatory ethics. Our results also demonstrate that the framing of ethics (e.g., through an organization’s ethics code) influences individuals’ ethical behavior and does so differently depending on an individual’s induced regulatory focus (Study 4).

From Enron to the recent world-wide financial crisis, corporate scandals and other instances of unethical behavior within organizations are becoming common topics covered by the media. These examples of ethical failures add to cases of employee misconduct, such as theft of office supplies, fraudulent expense reports or injury claims, and falsified overtime, which are costing US companies an estimated fifty billion dollars annually (see Mishra and Prasad, 2006 and Weber et al., 2003). In the wake of such widespread unethical conduct, many organizations have attempted to instill ethical values in their employees through ethics training or formal policy documents such as ethics codes (Weaver et al., 1999a and Weaver et al., 1999b). But these efforts vary in the degree to which they align with a company’s general approach to its business. Most companies encourage managers and employees to focus on promoting positive economic outcomes (e.g., Baetz, 1998). For instance, leaders may stress the importance of reaching specific financial goals within a given amount of time, or they may administer bonuses to employees who exceed their sales targets. By contrast, ethics initiatives tend to be packaged primarily as a set of constraints, compliance schemes, and violations to be prevented (Paine, 1994 and Treviño et al., 2001). For instance, the codes of conduct of many modern companies include statement such as “employees must avoid conflicts of interests” or “employees may not improperly use any company assets.” Does this subtle difference in the framing of ethics versus business objectives influence employee behavior? The current research addresses this question by examining whether the framing of ethics within organizations influences individuals’ likelihood to behave dishonestly. As a first step in our investigation, we examine whether the framing of ethics influences individuals’ ethical behavior and their preferences toward risk. We distinguish between two ways to frame ethical conduct: promotion of being ethical (i.e., the promotion of a positive and desirable state) and prevention of being unethical (the prevention of a negative or undesirable state). We build on psychological research on regulatory focus (Higgins, 1997), which suggests that people focus more heavily either on the promotion of positive outcomes or on the prevention of negative outcomes when attaining goals (Higgins, 1996 and Higgins et al., 1994). While subtle, these two ways of framing ethical conduct may produce significant differences in people’s likelihood to behave dishonestly—with important consequences for organizations. Our interest in this paper is not the study of people’s disposition toward prevention or promotion focus. Instead, we are interested in examining the influence of an individual’s regulatory focus when induced or primed by situational factors such as how the task has been framed. This research contributes to a broader program of study concerning the psychology of unethical behavior (e.g., Messick, 1995, Messick, 1996, Messick and Bazerman, 1996, Messick and Tenbrunsel, 1996 and Tenbrunsel and Messick, 1996). Similar to prior research in this domain, we focus on how subtle changes in the environment influence the ethical behavior of individual actors by inducing a prevention or a promotion focus in individuals. Several models of unethical behavior (e.g., Hegarty and Sims, 1978, Treviño, 1986 and Treviño and Youngblood, 1990) suggest that misconduct is influenced by a person-situation interaction. Specifically, the tendency of people to engage in unethical behavior depends on both characteristics of the environment and characteristics of the individual. For instance, prior work has shown that both personal characteristics (e.g., stage of moral development or concern for self-presentation) and contextual factors (such as the use of codes of ethics) influence ethical behavior (Wang and Lee, 2006 and Weaver et al., 1999a). In this vein, we study how an individual’s regulatory focus (when induced by subtle situational forces, such as the framing of the task) interacts with an organization’s framing of ethics (e.g., through an ethics code). Furthermore, we examine whether additive effects may occur when the two factors are consistent with one another (e.g., both the employee and the organization are focused on promoting positive outcomes or on preventing negative ones). Thus, our studies are designed to complement and extend existing knowledge about the conditions under which even good people are likely to cross ethical boundaries and the conditions under which they are likely to hew more closely to moral standards.

The question of whether unethical behavior such as cheating, stealing, and dishonesty is shaped by the environment is fundamental to both organizations and society. Healthy work and social environments depend on the ability of others (e.g., leaders and their organizations) to spread ethical norms and values, while reducing the attractiveness of unethical misconduct, whether through appropriate sanctioning rules, organizational policies, or an ethical culture. Our findings suggest a potentially important solution to problems of wrongdoing: by influencing individuals’ strategies of goal attainment and by framing ethics in terms of outcomes to be prevented, it is possible to reduce dishonesty within group and organizational settings.