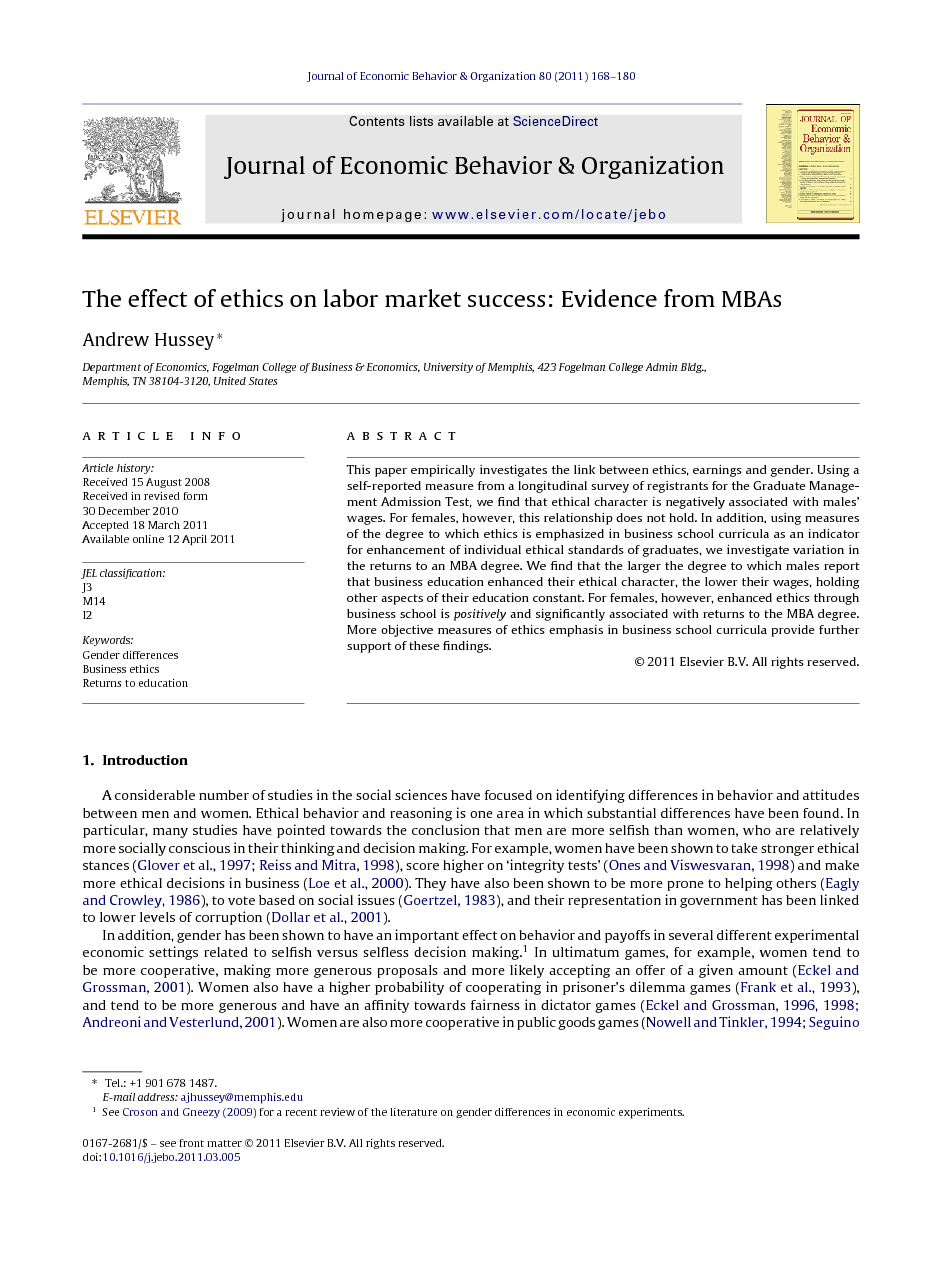 This paper empirically investigates the link between ethics, earnings and gender. Using a self-reported measure from a longitudinal survey of registrants for the Graduate Management Admission Test, we find that ethical character is negatively associated with males’ wages. For females, however, this relationship does not hold. In addition, using measures of the degree to which ethics is emphasized in business school curricula as an indicator for enhancement of individual ethical standards of graduates, we investigate variation in the returns to an MBA degree. We find that the larger the degree to which males report that business education enhanced their ethical character, the lower their wages, holding other aspects of their education constant. For females, however, enhanced ethics through business school is positively and significantly associated with returns to the MBA degree. More objective measures of ethics emphasis in business school curricula provide further support of these findings.

Using data from a longitudinal survey of registrants for the Graduate Management Admission Test, this paper has investigated the relationship between a self-reported measure of individual ethical character and job market success as reflected in an individual's earnings. In addition, using several measures of the degree to which ethics is emphasized in business school curricula as an indicator for enhancement of individual ethical standards of students, variation in the returns to an MBA degree was investigated. Results differ substantially between males and females. It seems that on an individual level, having high ethical standards is bad for males’ earnings. For females, however, it may be unimportant or even good. These results have some credibility for a few reasons. First, by looking at potential MBAs only, we consider a relatively homogenous group of people. Unobserved heterogeneity is likely to be less of a problem than it would be in the case of a sample of the general population. Second, a unique data set has allowed for a large number of control variables that are not commonly available to researchers. In particular, we control for spurious tendencies in response to skill possession questions or MBA skill enhancement questions by including an index of general responses to these skills separately from the responses dealing with ethical standards. We also control for other individual attitudes and beliefs, such as the personal importance of religion, in the regressions. Third, the results generally hold up under a number of specifications, including when individual fixed effects are included, and when non-self-reported variation in ethics emphasis across graduate management curricula is used as a proxy for changes in ethical standards of graduates. In addition to potential concerns previously raised, a possible objection to a causal interpretation of the results presented here relates to selection into jobs. Several studies show that the gender wage gap is significantly diminished when one takes into account different preferences by gender over fields of employment, types of jobs, and college major (Blau and Kahn, 1997, Fields and Wolff, 1995 and Loury, 1997). Ethical character could be serving as a similar sorting mechanism. To be sure, the job related controls used in this study have been limited, and our ethics measure may be picking up differences in preferences over jobs. Even still, the ability to obtain certain types of jobs (or promotions or raises) is likely to be one way in which willingness (or unwillingness) to engage in ethical behavior manifests itself. At the very least, our results suggest that raw earnings differentials may exist not only across gender, but simultaneously across gender and ethical character. According to one specification, the wage gap between “unethical” men and women is estimated to be 7.1% (controlling for a rich set of covariates), but this gap is cut in half when comparing “ethical” individuals. As a final caveat to any interpretation of the results presented here, it should be emphasized that this study has necessarily remained agnostic as to the definition of ethical standards. Indeed, much of the evidence presented here has relied on individual self-reported ratings of ethical standards, which should be viewed, at best, as an imperfect proxy for actual behavior in the workplace. In particular, this measure certainly depends on one's perception of ethics. It is possible that what women view as being ethical differs from the views of men. Indeed, in her pioneering work, Gilligan (1982) found that men and women use fundamentally different approaches in the way in which they make decisions about morality. The male approach involves the view that individuals have certain basic rights which must be respected. The female approach involves the view that people have certain responsibilities towards others. Thus, differences in perception, rather than differences in actual behavior, may be driving the results presented here. Of course, differences in individuals’ perceptions of business ethics are also likely to result in differences in actual behavior. According to Gilligan, while the male approach to morality imposes restrictions on what one can do, the moral decisions of females are more likely to be driven by an imperative to care for others. Some of the results presented here may thus be incorporating the combined effect of differences in perception or definition of high ethical standards and actual differences in ethics related behavior. More research is needed in order to zero in on (or rule out) a true causal relationship. In the absence of workers’ behavioral data, however, this study provides a step towards gaining a better understanding of extent to which individuals in business may have financial incentives to act with more or less regard to ethical standards. It also underscores the idea that economically relevant behavioral and perceptional differences between men and women exist outside of the laboratory, even in a relatively homogeneous sample of individuals interested in obtaining an MBA. These differences need to be more carefully considered in applied work.