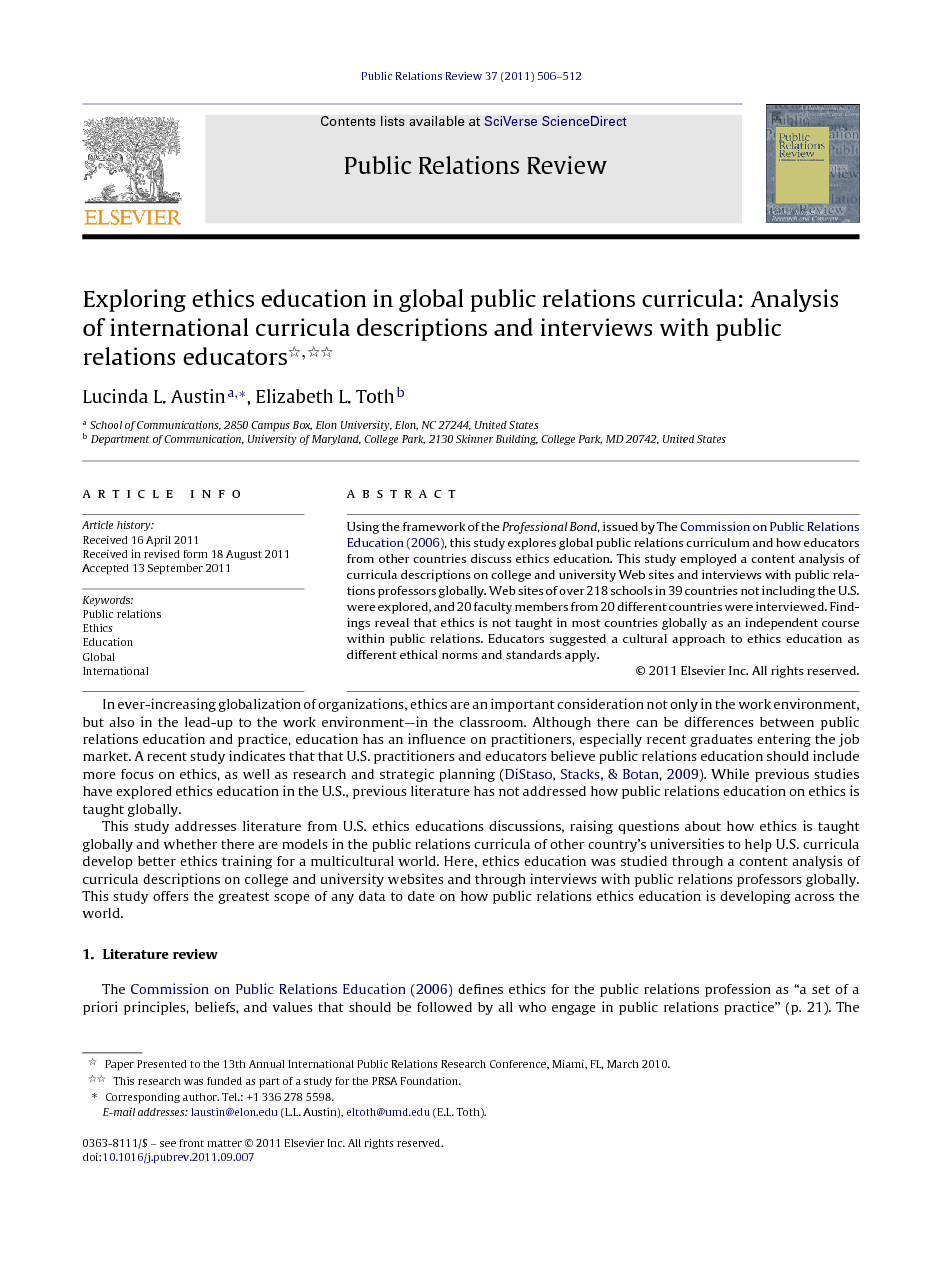 Using the framework of the Professional Bond, issued by The Commission on Public Relations Education (2006), this study explores global public relations curriculum and how educators from other countries discuss ethics education. This study employed a content analysis of curricula descriptions on college and university Web sites and interviews with public relations professors globally. Web sites of over 218 schools in 39 countries not including the U.S. were explored, and 20 faculty members from 20 different countries were interviewed. Findings reveal that ethics is not taught in most countries globally as an independent course within public relations. Educators suggested a cultural approach to ethics education as different ethical norms and standards apply.

Many of the educators in this study that reported separate ethics courses as part of the public relations program of study described their ethics courses as related to specific areas of public relations work—media ethics, business ethics, ethics of marketing, government ethics, organizational ethics, etc. Findings show that ethics education might also be consumed by legal classes that also attempt to cover ethics, or that ethics may be integrated throughout other courses such as public relations techniques and strategy courses. While these classes purport to cover ethics within the framework of other subjects, scholars argue that independent courses on ethics are needed. Ethics education may get pushed back as nonessential information and may often not be addressed at all in the classroom. Globally, educators are divided on the issue of whether or not ethics should be a separate course, integrated throughout the curriculum, or both. Previous literature and research also show quite a difference in reports of ethics education within programs. This study, however, shows that the majority of programs do not have a separate ethics course in their undergraduate or graduate curricula. In some instances, the educators desire a separate ethics course, but are facing institutional regulations and restrictions that prohibit designing such as course. Educators suggested that a cultural approach to the actual content of ethics courses should be taken, since different ethical norms and standards apply. Educators did not seem to mirror the Commission on Public Relations Education's (2006) statement that a common standard for ethics should extend across different countries. However, most educators were in agreement that ethics should be a part of the curriculum globally, whether as a separate course or integrated throughout the curriculum. Educators believed that some ethical principles could apply cross culturally to a global ethics education practice, but that ethics should be situated within a cultural context in the classroom and that cultural practices in the profession should be considered and incorporated. Educators also mentioned a fine balance between theory and application, the classroom and the profession, and profit and social capital. Most participants felt that a certain level of theory was required, but that ultimately ethics content should be applied to the profession to show students real-world scenarios that they may encounter; educators believed that oftentimes textbook scenarios did not mirror what students faced in the profession or effectively show the nuances in ethical decision making in the practice. Educators also encouraged the need to be realistic about students’ and companies’ desires to make profits; while many felt ethics should focus on being socially responsible and contributing to the larger society, some thought this may be unrealistic for their institution or for students who would ultimately have to deal with pressures from future employers. Findings suggest the need for global ethics education to strike a balance between the practical and the theoretical in utilizing applied case studies. Overall, educators were in widespread agreement of the need for ethics in public relations curricula. Most all educators stressed the importance of ethics to be integrated throughout the public relations curriculum, even those educators who advocated for a special course in ethics as well. Educators cautioned that having a course solely focusing on ethics did not mean that other courses should be void of ethics inclusion. Similar to the recommendations from the Commission on Public Relations Education, this study highlights that public relations programs should have an ethics component, whether this be through an ethics course, an ethics and law course, or ethics topics covered in various courses; however, the ideal program would also involve some element of ethics integrated throughout the entire curriculum.