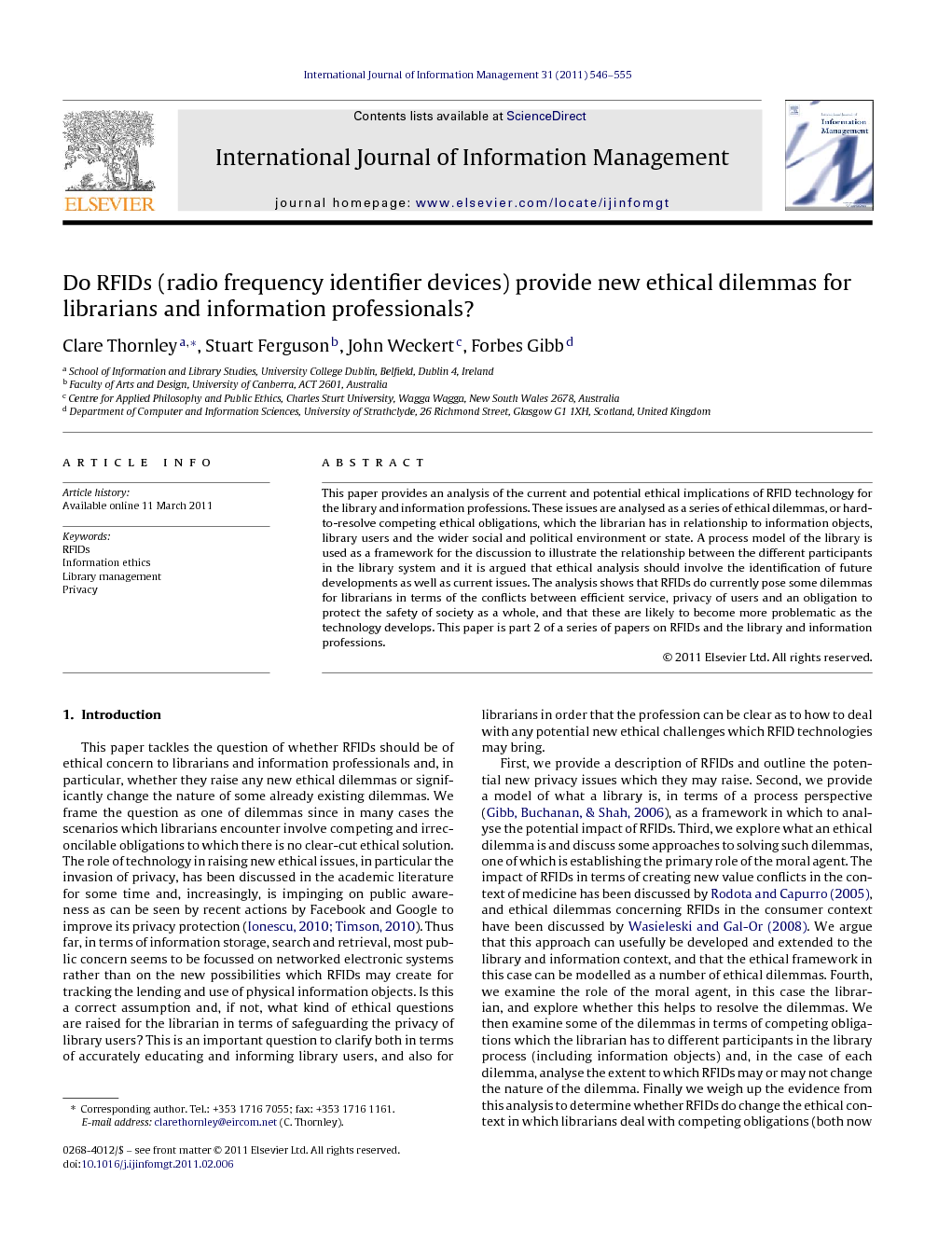 This paper provides an analysis of the current and potential ethical implications of RFID technology for the library and information professions. These issues are analysed as a series of ethical dilemmas, or hard-to-resolve competing ethical obligations, which the librarian has in relationship to information objects, library users and the wider social and political environment or state. A process model of the library is used as a framework for the discussion to illustrate the relationship between the different participants in the library system and it is argued that ethical analysis should involve the identification of future developments as well as current issues. The analysis shows that RFIDs do currently pose some dilemmas for librarians in terms of the conflicts between efficient service, privacy of users and an obligation to protect the safety of society as a whole, and that these are likely to become more problematic as the technology develops. This paper is part 2 of a series of papers on RFIDs and the library and information professions.

This paper tackles the question of whether RFIDs should be of ethical concern to librarians and information professionals and, in particular, whether they raise any new ethical dilemmas or significantly change the nature of some already existing dilemmas. We frame the question as one of dilemmas since in many cases the scenarios which librarians encounter involve competing and irreconcilable obligations to which there is no clear-cut ethical solution. The role of technology in raising new ethical issues, in particular the invasion of privacy, has been discussed in the academic literature for some time and, increasingly, is impinging on public awareness as can be seen by recent actions by Facebook and Google to improve its privacy protection (Ionescu, 2010 and Timson, 2010). Thus far, in terms of information storage, search and retrieval, most public concern seems to be focussed on networked electronic systems rather than on the new possibilities which RFIDs may create for tracking the lending and use of physical information objects. Is this a correct assumption and, if not, what kind of ethical questions are raised for the librarian in terms of safeguarding the privacy of library users? This is an important question to clarify both in terms of accurately educating and informing library users, and also for librarians in order that the profession can be clear as to how to deal with any potential new ethical challenges which RFID technologies may bring. First, we provide a description of RFIDs and outline the potential new privacy issues which they may raise. Second, we provide a model of what a library is, in terms of a process perspective (Gibb, Buchanan, & Shah, 2006), as a framework in which to analyse the potential impact of RFIDs. Third, we explore what an ethical dilemma is and discuss some approaches to solving such dilemmas, one of which is establishing the primary role of the moral agent. The impact of RFIDs in terms of creating new value conflicts in the context of medicine has been discussed by Rodota and Capurro (2005), and ethical dilemmas concerning RFIDs in the consumer context have been discussed by Wasieleski and Gal-Or (2008). We argue that this approach can usefully be developed and extended to the library and information context, and that the ethical framework in this case can be modelled as a number of ethical dilemmas. Fourth, we examine the role of the moral agent, in this case the librarian, and explore whether this helps to resolve the dilemmas. We then examine some of the dilemmas in terms of competing obligations which the librarian has to different participants in the library process (including information objects) and, in the case of each dilemma, analyse the extent to which RFIDs may or may not change the nature of the dilemma. Finally we weigh up the evidence from this analysis to determine whether RFIDs do change the ethical context in which librarians deal with competing obligations (both now and potentially in the future). In our conclusions we discuss the ethical implications for the profession irrespective of whether the answer is “more of the same” or “new type of threat”. This will then provide a context for our future work on the use and efficacy of ethical and management guidelines (National Information Standards Organization1) for the profession in terms of providing advice on the use of new technologies which may pose ethical dilemmas.