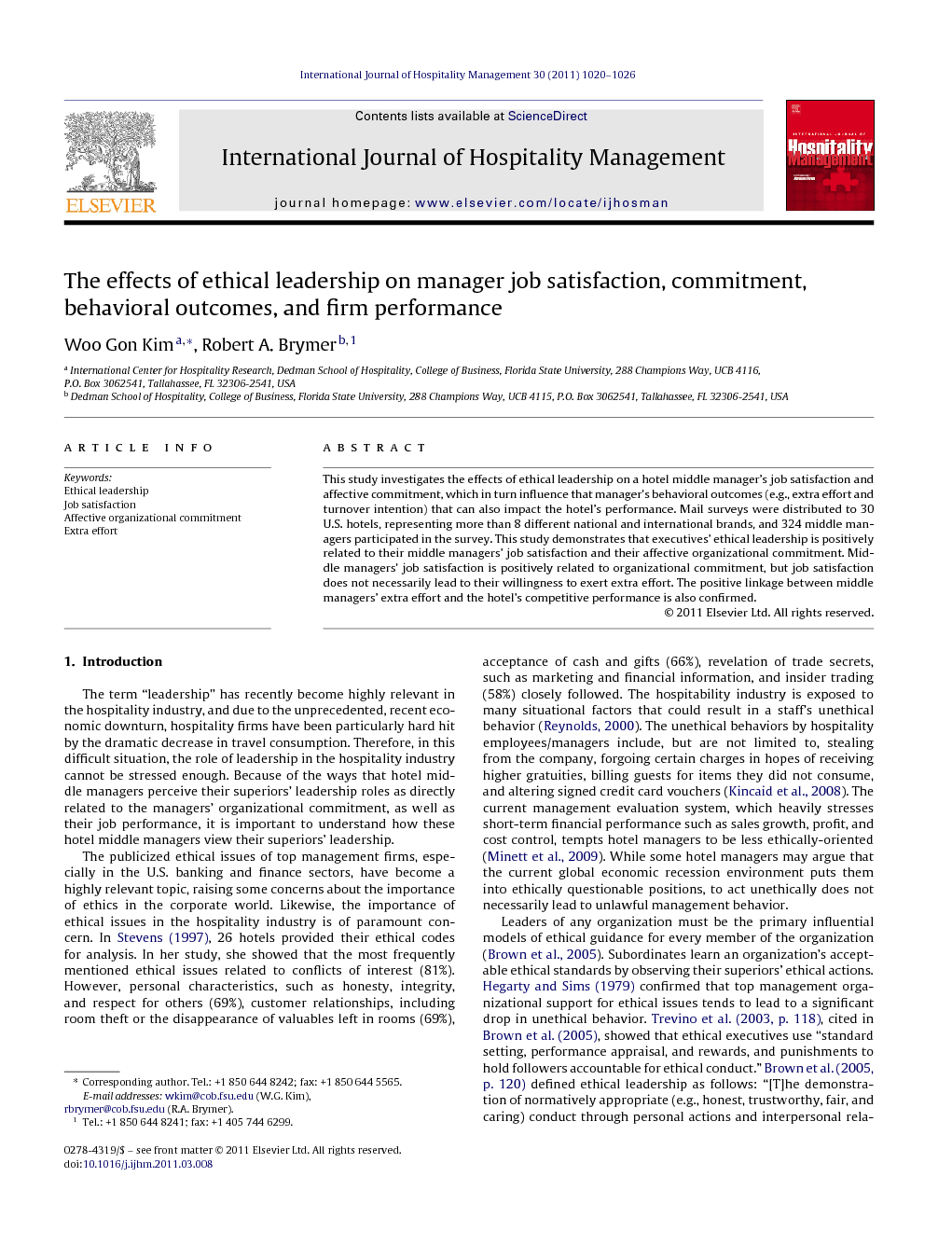 The term “leadership” has recently become highly relevant in the hospitality industry, and due to the unprecedented, recent economic downturn, hospitality firms have been particularly hard hit by the dramatic decrease in travel consumption. Therefore, in this difficult situation, the role of leadership in the hospitality industry cannot be stressed enough. Because of the ways that hotel middle managers perceive their superiors’ leadership roles as directly related to the managers’ organizational commitment, as well as their job performance, it is important to understand how these hotel middle managers view their superiors’ leadership. The publicized ethical issues of top management firms, especially in the U.S. banking and finance sectors, have become a highly relevant topic, raising some concerns about the importance of ethics in the corporate world. Likewise, the importance of ethical issues in the hospitality industry is of paramount concern. In Stevens (1997), 26 hotels provided their ethical codes for analysis. In her study, she showed that the most frequently mentioned ethical issues related to conflicts of interest (81%). However, personal characteristics, such as honesty, integrity, and respect for others (69%), customer relationships, including room theft or the disappearance of valuables left in rooms (69%), acceptance of cash and gifts (66%), revelation of trade secrets, such as marketing and financial information, and insider trading (58%) closely followed. The hospitability industry is exposed to many situational factors that could result in a staff's unethical behavior (Reynolds, 2000). The unethical behaviors by hospitality employees/managers include, but are not limited to, stealing from the company, forgoing certain charges in hopes of receiving higher gratuities, billing guests for items they did not consume, and altering signed credit card vouchers (Kincaid et al., 2008). The current management evaluation system, which heavily stresses short-term financial performance such as sales growth, profit, and cost control, tempts hotel managers to be less ethically-oriented (Minett et al., 2009). While some hotel managers may argue that the current global economic recession environment puts them into ethically questionable positions, to act unethically does not necessarily lead to unlawful management behavior. Leaders of any organization must be the primary influential models of ethical guidance for every member of the organization (Brown et al., 2005). Subordinates learn an organization's acceptable ethical standards by observing their superiors’ ethical actions. Hegarty and Sims (1979) confirmed that top management organizational support for ethical issues tends to lead to a significant drop in unethical behavior. Trevino et al. (2003, p. 118), cited in Brown et al. (2005), showed that ethical executives use “standard setting, performance appraisal, and rewards, and punishments to hold followers accountable for ethical conduct.” Brown et al. (2005, p. 120) defined ethical leadership as follows: “[T]he demonstration of normatively appropriate (e.g., honest, trustworthy, fair, and caring) conduct through personal actions and interpersonal relationships, and the promotion of such conduct to followers through two-way communication, reinforcement through providing ethical standards, rewarding ethical conduct, and discipline the wrongdoers, and decision-making by understanding the importance of their decisions and making fair decisions.” Brown et al. (2005) clearly demonstrated the consequences of ethical leadership, and further, they postulated that ethical leadership is strongly associated with a subordinate's satisfaction with his/her leaders, with his/her exerting extra effort, and with his/her willingness to report problems. Zhu et al. (2004) suggested that future researchers consider outcomes of ethical leadership behavior in terms of financial performance of an organization or corporate reputation. Building on the previous research, this study applies the ethical leadership model to the hotel industry and extends the analytical frameworks of Brown et al. (2005) by incorporating affective commitment, turnover, and competitive performance into the conceptual model. Regardless of the increasing number of studies related to ethical issues in the hospitality industry, limited research has been conducted on ethical leaders and how their values are communicated to managers and employees in the hospitality organization. This study, then, attempts to fill this void by examining the impact of a superior's ethical leadership on middle managers’ job satisfaction and behavioral outcome, as well as their organization's performance. Thus, the primary purpose of this study is to investigate the effects of ethical leadership on a manager's job satisfaction and affective commitment, which in turn influence that manager's behavioral outcomes (e.g., extra effort and turnover intention) that can further impact the hotel's performance.

Multiple stakeholders can benefit from the ethical behavior of upper level hotel managers. The corporate leaders and investors could all experience a more trusting relationship from mangers who behave ethically. This positive impact may be exhibited in open lines of communication, lower stress levels, and the fostering of a work environment that is conducive to maximizing critical performance issues. There are also implications for the dynamics of a hotel management team; that is, by minimizing turnover, improving job satisfaction, and showing commitment to the organization, the operational performance could be enhanced. Hotels that have ethical leaders could experience many positive implications that could contribute to the operation's long-term success. Ethical leadership is more than good behavior; it is clearly a key component in the successful operation of hotels. Our findings are in line with previous scholars who argue that superiors’ ethical leadership in a fair, considerate, open, sincere, and honest manner plays a critical role in enhancing their subordinates job satisfaction, including their contentment with working conditions and current salary (Brown and Trevino, 2006 and Neubert et al., 2009). Consistent with the findings of Brown and Trevino (2006), the results show that executives’ exemplary behavior leads to middle managers’ affective organizational commitment (i.e., having pride for the organization, caring about the future of the organization, sharing similar values with the organization, etc.). Neubert et al. (2009) argue that ethical leadership behavior should create a strong moral atmosphere for the whole organization, which could be a precursor of stimulating job satisfaction and affective organizational commitment. Thus, hotel executives should permeate the entire organization with their ethical leadership behavior in order to shape its ethical environment, which in turn makes followers fully satisfied with, and committed to, the organization. Middle managers’ job satisfaction is positively related to organizational commitment, but job satisfaction does not necessarily lead to their willingness to exert extra effort. Both job satisfaction and a superior's leadership role serve as direct predictors of middle managers’ AOC. It is worth noting that while job satisfaction is an important predictor of AOC, highly satisfied middle managers do not always go above and beyond to meet their guests’ expectations. Middle managers who are highly committed and care about the future of a hotel organization surely put forth more effort when serving their hotel guests. Thus, middle managers’ job satisfaction may be a necessary condition, but it may not be great enough to make them perform beyond their job requirements; it is critical for hotels to obtain the organizational commitment of middle managers in order to expect them to provide these extra role performances. Significantly, these findings confirm that hotel middle managers who experience high job satisfaction and organizational commitment with pride and care for their organization are less likely to quit their jobs. Employee and manager turnover has been a primary concern of the hotel industry, and it is costly to hospitality organizations in many ways: it increases recruiting, hiring, and training costs, and it disrupts communication and productivity (Dalton and Todor, 1982). In order to increase the level of manager job satisfaction, hotels should improve their compensation and working conditions. According to Lam et al. (2002), hotels should offer training and cultivate a favorable workplace relationship and mentorship to increase the level of affective organizational commitment, which in turn can help reduce the staff's turnover intention. Low turnover intention of middle managers, which leads to higher management productivity, has an inverse relationship with a hotels’ strong operational performance. The invaluable insight this offers to hotel leaders is that when manager turnover intention declines, the organization's competitive performance among hotels in their competitive market set significantly improves. So, a hotel's reduction in turnover intention among middle managers leads to a direct positive impact on its market share, guest satisfaction ratings, occupancy, and average room rate. This revelation has very significant ramifications for hotel leaders who want to improve their operational performance. In addition, the positive linkage between middle managers’ extra effort and the hotel's competitive performance is also confirmed. It is important for a hotel organization to cultivate highly engaged middle managers who voluntarily assist hotel team members and hotel guests even if it means surpassing their job requirements and providing more discretionary efforts with little recognition. To maximize the financial performance, hotel organizations should consider developing an abundance of highly engaged middle managers. Although previous studies (i.e., Brymer et al., 2006) regarding ethical leadership in the hospitality industry exist, because this topic is still nascent in the hospitality literature, more studies are needed to explore the antecedents and consequences of ethical leadership. Also, this current study is not free from limitations. One limitation of this research is the focus solely on the hotel operations property level, with no interaction from the corporate leadership perspective. Future researchers may investigate correlations between property level and corporate leadership, relative to the impact on a company's overall success. Another limitation of this study is that it does not include feedback from the hourly staff. Would the hourly employees view their middle managers as ethical, and what impact would their perceptions have on key measures? Since hourly employees have the most direct contact with guests, is there a higher relationship between their perceptions and customer satisfaction? While this study only considered hotels, future researchers may explore the role of ethical leadership in other hospitality sectors, such as casinos, restaurants, cruise lines, and so on. Finally, it would be helpful if future researchers would further examine the antecedents of ethical behavior. How do hourly employees, middle managers, executives, and corporate leaders identify and define ethical behavior in very specific terms? In order to increase the likelihood of future ethical behavior, can we draw detailed guidelines that would have universal acceptance in the hospitality industry? Also, how do organizations develop, enhance, train, and foster ethical leadership practices among managers, so we can offer key insights for future leaders?