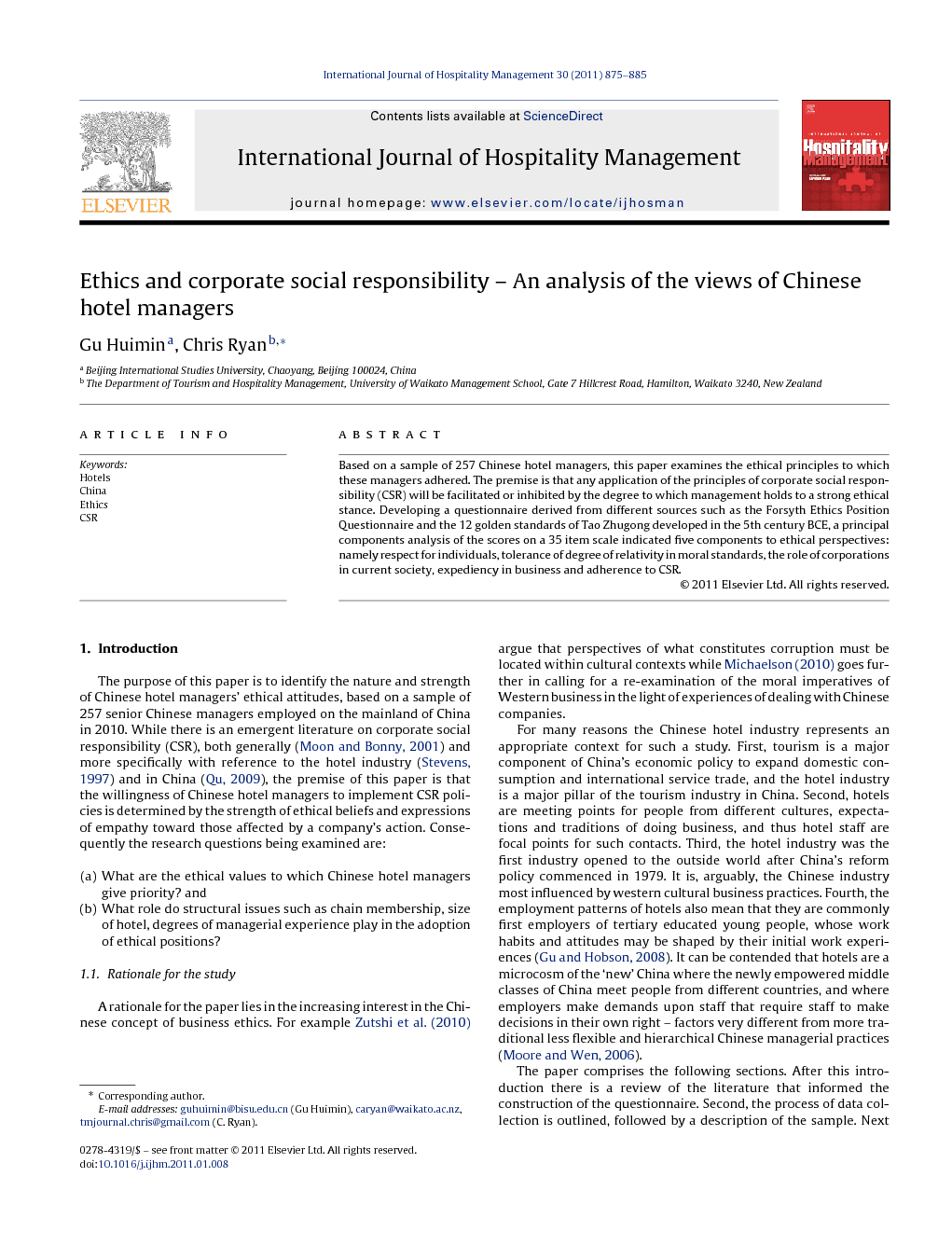 Based on a sample of 257 Chinese hotel managers, this paper examines the ethical principles to which these managers adhered. The premise is that any application of the principles of corporate social responsibility (CSR) will be facilitated or inhibited by the degree to which management holds to a strong ethical stance. Developing a questionnaire derived from different sources such as the Forsyth Ethics Position Questionnaire and the 12 golden standards of Tao Zhugong developed in the 5th century BCE, a principal components analysis of the scores on a 35 item scale indicated five components to ethical perspectives: namely respect for individuals, tolerance of degree of relativity in moral standards, the role of corporations in current society, expediency in business and adherence to CSR.

The purpose of this paper is to identify the nature and strength of Chinese hotel managers’ ethical attitudes, based on a sample of 257 senior Chinese managers employed on the mainland of China in 2010. While there is an emergent literature on corporate social responsibility (CSR), both generally (Moon and Bonny, 2001) and more specifically with reference to the hotel industry (Stevens, 1997) and in China (Qu, 2009), the premise of this paper is that the willingness of Chinese hotel managers to implement CSR policies is determined by the strength of ethical beliefs and expressions of empathy toward those affected by a company's action. Consequently the research questions being examined are: (a) What are the ethical values to which Chinese hotel managers give priority? and (b) What role do structural issues such as chain membership, size of hotel, degrees of managerial experience play in the adoption of ethical positions? 1.1. Rationale for the study A rationale for the paper lies in the increasing interest in the Chinese concept of business ethics. For example Zutshi et al. (2010) argue that perspectives of what constitutes corruption must be located within cultural contexts while Michaelson (2010) goes further in calling for a re-examination of the moral imperatives of Western business in the light of experiences of dealing with Chinese companies. For many reasons the Chinese hotel industry represents an appropriate context for such a study. First, tourism is a major component of China's economic policy to expand domestic consumption and international service trade, and the hotel industry is a major pillar of the tourism industry in China. Second, hotels are meeting points for people from different cultures, expectations and traditions of doing business, and thus hotel staff are focal points for such contacts. Third, the hotel industry was the first industry opened to the outside world after China's reform policy commenced in 1979. It is, arguably, the Chinese industry most influenced by western cultural business practices. Fourth, the employment patterns of hotels also mean that they are commonly first employers of tertiary educated young people, whose work habits and attitudes may be shaped by their initial work experiences (Gu and Hobson, 2008). It can be contended that hotels are a microcosm of the ‘new’ China where the newly empowered middle classes of China meet people from different countries, and where employers make demands upon staff that require staff to make decisions in their own right – factors very different from more traditional less flexible and hierarchical Chinese managerial practices (Moore and Wen, 2006). The paper comprises the following sections. After this introduction there is a review of the literature that informed the construction of the questionnaire. Second, the process of data collection is outlined, followed by a description of the sample. Next the results are presented and finally these are discussed and implications identified. 1.2. General background to the study While ethics in business have always been important (Donham, 1929, Rainbal and Payne, 1990, Fort, 2000 and Bailey and Spicer, 2007) events dating from approximately the middle of the 1990s have resulted in more commentary and research as the business world grapples with failures of corporate governance and ethical standards. For example, led by various pressure groups and non-governmental organisations, higher standards are being demanded of leading global companies such as Nike, Walmart and McDonalds among others. Companies have responded in certain key areas, such as in the case of child labour (for example in the establishment of the World Federation of Sporting Goods Industry, www.wfsgi.com; Van Tulder and Kolk, 2001) while companies such as Adidas, Philips, van Heusen and Reebok among others have adopted the standards of the Fair Labour Association (www.Ichr.org). China is not immune from these trends. In 2010, faced with mounting pressure from media and labour organisations, FoxConn (a Taiwanese company operating in China) announced wage increases of up to 70 percent and changed working practices to offset conditions that had caused stressed workers to commit suicide (Chan and Pun, 2010). Other global examples of an emerging congruence between profitable business and a ‘fairer’ distribution of prices and income can be found in other areas such as the Fair Trade arrangements in coffee and other products (www.globalexchange.org/coffee, Jaffee, 2007). An increasing number of companies are seeking to implement the standards of the International Ethical Standard (SA8000) and this includes hotel companies adopting ethical codes of conduct and triple accounting such as Novotel (Weinz, 2001). However, based on a survey of 36 Chinese hotel managers, Gu (2009) examined the use of the SA8000 in promoting CSR policies within the Chinese industry, but concluded there remained a need to better understand the drivers for such policies within a Chinese context. More generally Guo and Wang (2005) identified a series of key failures in Chinese industry that include ‘learning but not doing’, a lack of cohesion and senses of responsibility, and a weak managerial foundation.

Table 2 provides scores that indicate Chinese hotel managers generally hold to ethical standards as measured by these items. Of interest is the finding that the higher scores tend to organisational ethics (i.e. relating to the ethical role of business) and four of the top five items relate to this. This does open a possibility for future research to better tease out the relationship between personal ethics and the adoption of organisational ethics. There is general agreement that actions should not prejudice the interests of individual others, but herein lies a limitation in the research. This relates to the degree to which a manager may distinguish between an individual and an organisation – is it for example permissible to undertake an action that may negatively influence a competitor if it falls short of the highest standards of ethical behaviour? After all there is, at best, only a lukewarm endorsement of the item ‘Good ethics is often good business’ and the value of the standard deviation implies some disagree with this statement. It was also found, for 15 of the 37 items, that statistically significant differences existed between the status of managers as measured by seniority of managerial position and whether the respondent was a proprietor manager. There was no consistent pattern of high-low scores across the groups but proprietors and senior managers tended to the higher scores relating to the dimension of respect for individuals, with middle managers scoring a little lower but tending to agree with the statements that individuals should be respected. In interpreting the results one needs to be aware of possible problems relating to socially acceptable response sets (Gu et al., 2009), but it is suggested that examination of the standard deviations provides evidence that this is less of a problem than may be thought because the dispersion of responses seems to be relatively high, thereby indicating a dispersal of opinions. However an issue that must be noted is that data were captured at two different stages, namely first a sample of hotel managers attending a professional conference and second, a response to a personal follow up that was undertaken to increase the sample size. This mode of data collection, resulting in a convenience sample, may well inhibit any ability to generalise from the results, and represents a significant limitation to the research. However, the results possess some value from the viewpoint that relatively little, if any, study has been undertaken of the ethics that may underlie the adoption of corporate social responsible policies in Chinese hotels. Additionally, the study indicates that the Forsyth Ethics Position Questionnaire with its dimensions of situationism, absolutism, subjectivism and exceptionism has applicability within the Chinese hotel industry. It is also argued within the paper that an orientation toward others is arguably consistent with long held Chinese traditions, as with other personal philosophies. Interestingly the Chinese perspective may be consistent with ‘virtue ethics’ – a view that in the western literature has achieved some recognition in the period since 1980. From a Chinese Confucian perspective the most important thing in ethics and social relationships is not necessarily the actions that are taken but, rather, in the quality of the person who undertakes the action (Allinson, 1989). It thus differs from concepts based on moral ‘rightness’ or ‘wrongness’ – yet is consistent with Confucian, Buddhist and Daoist principles of personal journeys toward enlightenment. Thus, to misquote slightly the 17th verse of Dao De Jing (Laozi, c200 BCE) ‘Manage quietly and the staff will realize, They are responsible For their own well-being’. Some of the response sets are consistent with traditional Chinese patterns of thought, for example relating to skew to agreement on items relating to dignity of others, and relationships of morals to ‘rightness’. Again, in such response patterns echoes of congruency with the Dao de Jing may be found. Given that the Maoist period saw a significant attack on the 4 ‘olds’ which included traditional Confucian, Buddhist and Daoist thinking, any analysis of the current Chinese scene, whether political or managerial must consider the resurgence and even patronage of these modes of thinking in the Chinese state, and herein may lay one difference between western and Chinese managerial practices (Ryan and Gu, 2009). Finally, it should be noted that the study represents a first step in a continuing research process. There remain unanswered questions such as to what extent do ethical positions lead to the actual adoption of CSR policies, which aspect of CSR is most enacted (those relating to human resource policies, the environment or communities) and are there correlations between expressed ethical views and marketing initiatives. These questions and others form the content of further study being undertaken in 2011.