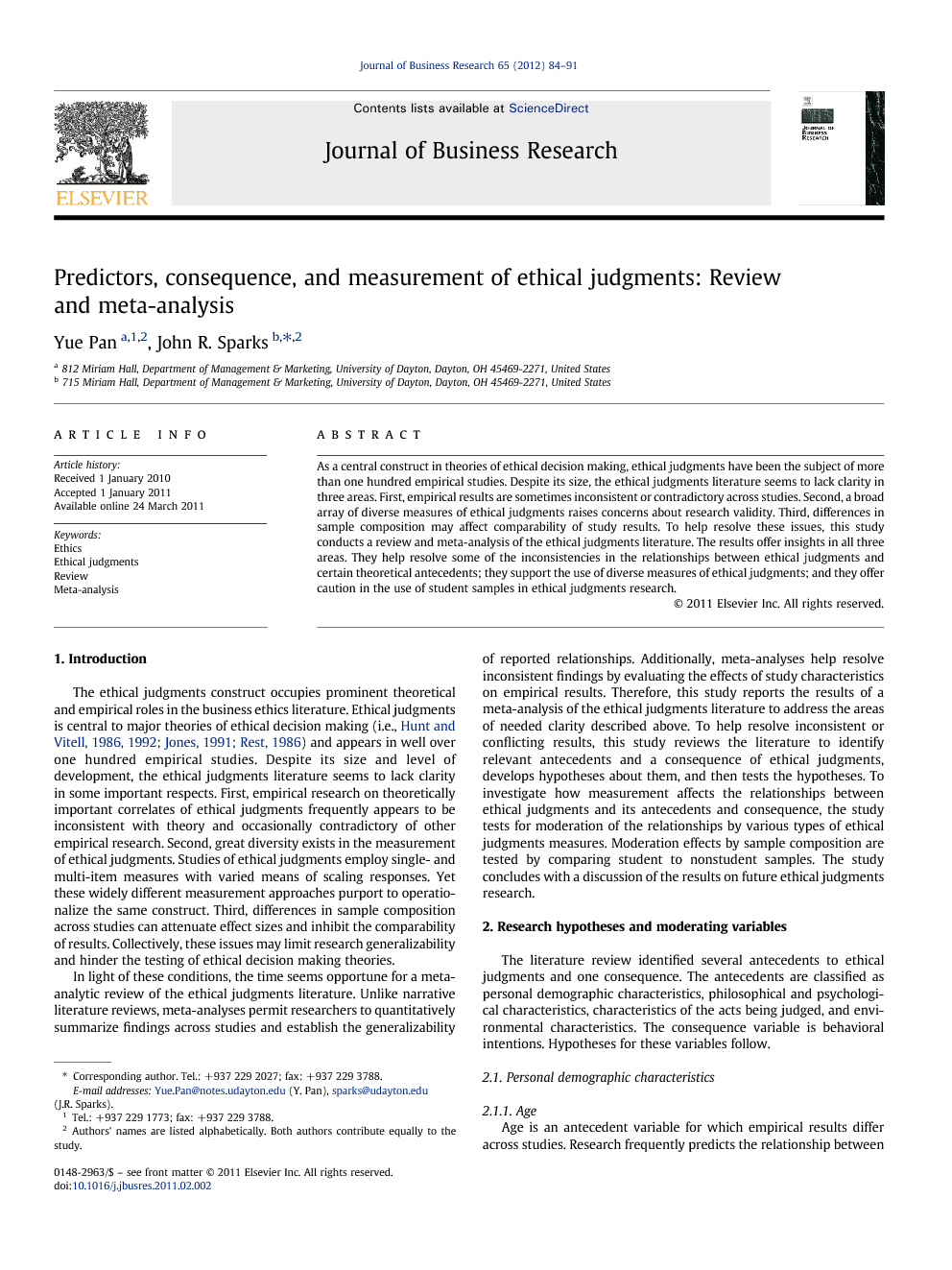 The results of this analysis indicate some success towards meeting the three objectives set earlier for this research. Perhaps the most noteworthy result pertains to the issue of measurement. The great diversity that exists in approaches to measuring ethical judgments raises serious concerns of validity. While a single standardized measure of ethical judgments may not be necessary or even desirable, testing of ethical decision theories requires valid measures of major constructs. A wide array of study-specific measures could work against this requirement. Thus, the absence of moderation effects by measure type or judgment scale suggests that ethical judgments is conceptually amenable to varied operationalizations, a result that bodes well for the current state of the art in ethical judgments research. That said, the growing popularity of well-tested ethical judgments measures such as the MES and CES is a positive development. The results also shed light on some of the inconsistencies in ethical judgments research discussed earlier. While this study does not resolve all of the conflicting results, the analysis may offer insight into some, particularly how education and income affect ethical judgments. These results support the view that, rather than make judgments stricter, education may open minds and enhance reasoning such that ethical judgments become less stringent, a perspective that is consistent with Kohlberg's (1981). The negative relationship between ethical judgments and income may imply that the condition of being wealthy or poor influences ethical standards and the strictness with which they are applied. The inverse relationship found in this analysis may be better explained by income's well-established positive association with education. Finally, the qualified evidence that student samples systematically produce greater effect sizes than nonstudent samples raises cautions about sample composition. Clearly, student samples provide a sometimes indispensible means of theory testing. However, to the extent that student samples inflate effect sizes, researchers should utilize samples that more readily permit generalizability of results. While this cautionary note is certainly not new, the results of this meta-analysis provide grounds for repeating it. Beyond the results highlighted above, the meta-analysis helps quantitatively support the generally consistent relationships between ethical judgments and several other variables. These include gender, idealism, relativism, Machiavellianism, ethical awareness, deontological and teleological evaluations, moral intensity, and the outcome variable, behavioral intentions. Rather than continue to test these well-established relationships, future research may wish to focus on variables with theoretically sound relationships to ethical judgments but for which no empirical relationships have been established. Such variables may include age, work experience, locus of control, religiosity, and ethical environment. These variables do not seem to significantly impact ethical judgments. Future research may identify potential boundary conditions that circumscribe the effects of these variables. Along these lines, future research can also examine other potential explanatory factors for observed differences in individuals' ethical judgments and behavioral intentions. Because ethical judgments play such a central role in theories of ethical decision making, the construct will remain an important part of research on ethical decision making and unethical behavior.