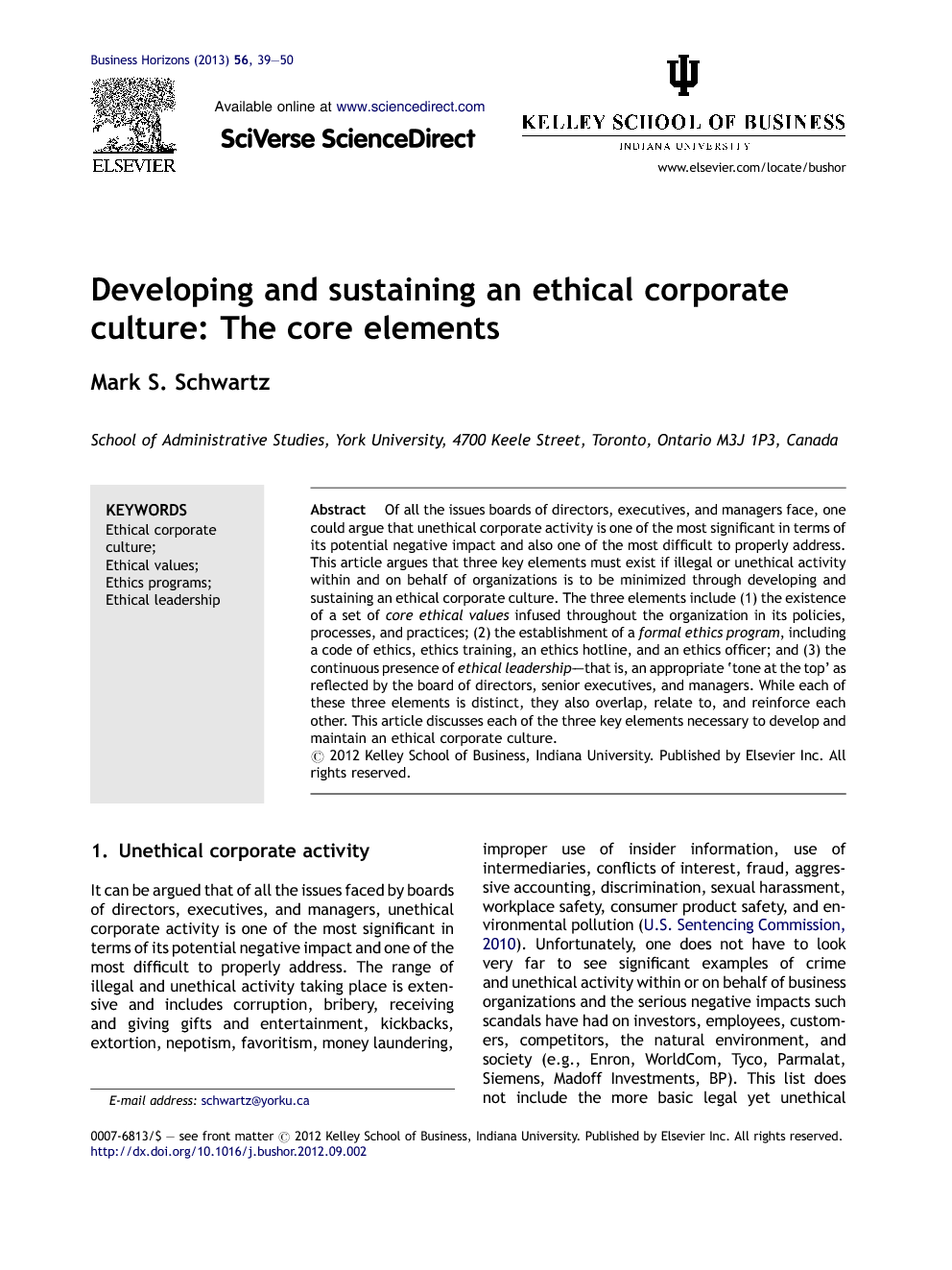 Of all the issues boards of directors, executives, and managers face, one could argue that unethical corporate activity is one of the most significant in terms of its potential negative impact and also one of the most difficult to properly address. This article argues that three key elements must exist if illegal or unethical activity within and on behalf of organizations is to be minimized through developing and sustaining an ethical corporate culture. The three elements include (1) the existence of a set of core ethical values infused throughout the organization in its policies, processes, and practices; (2) the establishment of a formal ethics program, including a code of ethics, ethics training, an ethics hotline, and an ethics officer; and (3) the continuous presence of ethical leadership—that is, an appropriate ‘tone at the top’ as reflected by the board of directors, senior executives, and managers. While each of these three elements is distinct, they also overlap, relate to, and reinforce each other. This article discusses each of the three key elements necessary to develop and maintain an ethical corporate culture.

Figure 1 summarizes the interaction of all three elements necessary to develop and sustain an ethical corporate culture within a firm. Once an ethical corporate culture is developed and hopefully sustained, the assumption is that the extent of crime, corruption, and unethical activity within organizations or on their behalf will be minimized. Of course, developing an ethical corporate culture is only the first step, as multiple challenges must continually be overcome. For example, developing and sustaining an ethical corporate culture becomes exceptionally difficult for large multinational organizations with tens if not hundreds of thousands of employees around the world, each with his/her own distinct ethical perspective and culture. As such, a general or overarching corporate culture does not exist or would at least be extremely difficult to identify in any large multinational organization. Constant acquisitions or mergers between firms that possess very distinct ethical corporate cultures make it even more difficult to establish and maintain consistent ethical norms across an entire organization. A single change in top management can also have a significant negative impact on ethical corporate cultures, as demonstrated with respect to CEO Jeffrey Skilling at Enron. While difficult economic conditions or intense competition that might lead to financial ruin can actually strengthen ethical corporate culture due to increased scrutiny, such conditions might also intensify the pressure on firms to reject their ethical norms in favor of the bottom line. Unfortunately, it is often difficult to measure the success of an ethical corporate culture in terms of outcomes, as one cannot always identify scandals that were avoided as a result of ethical work environments. In any event, while firms must undertake significant and sustained efforts to ensure high ethical standards, such efforts must take place along with the decisions and actions of other stakeholders, including governments (e.g., through regulation, enforcement, incentives), employees (e.g., where to work), customers (e.g., which companies’ products to buy or services to use), suppliers (e.g., which companies to work with), creditors (e.g., where to lend), shareholders (e.g., where to invest, shareholders resolutions), NGOs (e.g., through the development of ethical codes and pressure tactics), academics (e.g., through normative research), and the media (e.g., through investigative reporting). As a multi-pronged approach, all of these stakeholders can collectively place additional pressure or create incentives to encourage firms and their agents to engage in legal and ethical behavior. With respect to firms’ own efforts, there are three fundamental elements that form the basis of an ethical corporate culture: (1) the existence of a set of core ethical values, (2) the establishment of a formal ethics program, and (3) the continuous presence of ethical leadership. As a summary, Table 2 highlights the key recommendations and provides better-known corporate examples of the good and bad for each of the three pillars of an ethical corporate culture. With significant corporate scandals taking place in 2010—such as Toyota's recall troubles, leading to approximately $50 million in fines and billions of dollars in related expenses; Goldman Sachs betting against a sub-prime mortgage product while simultaneously recommending the product to its own clients, leading to a $550 million settlement; and BP's massive oil spill in the Gulf of Mexico, spurring establishment of a $20 billion compensation fund—one might question whether these firms had all three elements clearly present. Without all three of these elements firmly in place, each of these firms arguably developed corporate cultures that emphasized financial considerations over the health, safety, or general wellbeing of other stakeholders. For example, some suggest that Toyota has a secretive corporate culture in Japan that disagrees with disclosing safety defects (Linebaugh, Searcey, & Shirouzu, 2010), and Goldman Sachs’ corporate culture focus on revenue generation, egos, and bonuses is viewed as contributing to its clients being misled (Morgenson & Story, 2010). Similarly, a U.S. government commission referred to BP as possessing a culture of complacency, with profits taking priority over safety, which partially led to the Gulf oil spill (Crooks, 2010). Future research might examine the extent to which firms like these that suffer ethical scandals are deficient in terms of infusing ethical values throughout the organization, possessing a weak ethics program, and/or lacking ethical leadership. Research might also examine whether such firms succeed in developing and sustaining ethical corporate cultures following such incidents based on the presence of the three core elements or if any changes in ethical culture tend to be merely short term in nature. While all three elements are distinct, they also reinforce and support each other. For example, ethical values become the basis for ethics programs, which can in turn enhance ethical leadership. As discussed, ethical leadership is critical for the successful infusion of ethical values throughout the organization and the potential effectiveness of ethics programs. When all three elements of an ethical corporate culture are in place, employees are not only sensitized to recognize the ethical dilemmas they or their firms face, but will also hopefully have the motivation, ability, and confidence to respond in an ethically appropriate manner with such ethical behavior being supported and rewarded by all managerial levels of the organization. Such ethical sensitivity will hopefully not only take place for macro-level ethical issues, such as whether to open up operations in a country run by a repressive regime, but also for micro-level issues, such as whether to hire a friend who is highly qualified for a job position. Nevertheless, due to human nature, crime, corruption, and other factors, illegal or unethical activity will never be completely eliminated for a certain percentage of the workforce regardless of whatever efforts are undertaken. However, business firms have an ethical obligation to make reasonable attempts to minimize the presence of crime and unethical activity for the good of all society.