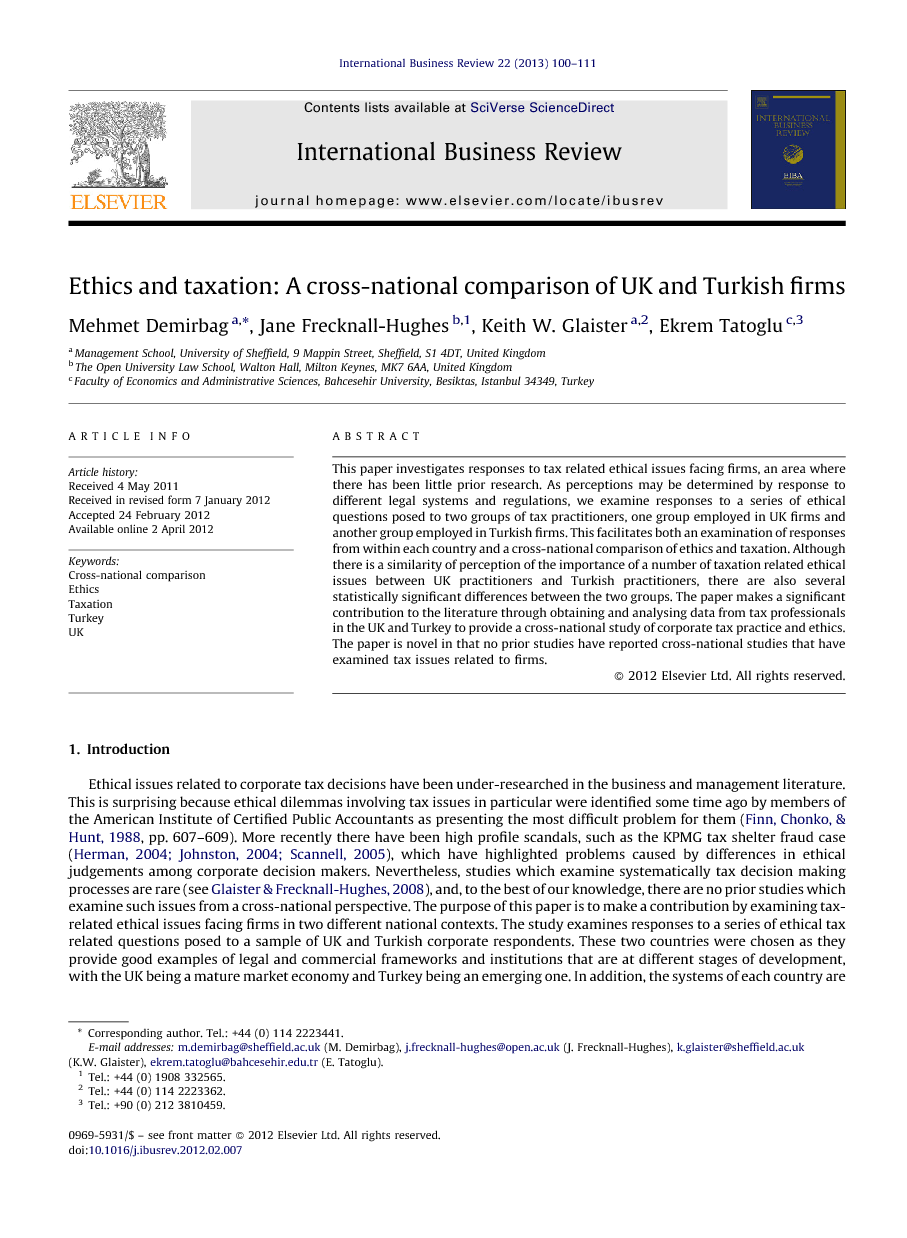 This paper investigates responses to tax related ethical issues facing firms, an area where there has been little prior research. As perceptions may be determined by response to different legal systems and regulations, we examine responses to a series of ethical questions posed to two groups of tax practitioners, one group employed in UK firms and another group employed in Turkish firms. This facilitates both an examination of responses from within each country and a cross-national comparison of ethics and taxation. Although there is a similarity of perception of the importance of a number of taxation related ethical issues between UK practitioners and Turkish practitioners, there are also several statistically significant differences between the two groups. The paper makes a significant contribution to the literature through obtaining and analysing data from tax professionals in the UK and Turkey to provide a cross-national study of corporate tax practice and ethics. The paper is novel in that no prior studies have reported cross-national studies that have examined tax issues related to firms.

Ethical issues related to corporate tax decisions have been under-researched in the business and management literature. This is surprising because ethical dilemmas involving tax issues in particular were identified some time ago by members of the American Institute of Certified Public Accountants as presenting the most difficult problem for them (Finn, Chonko, & Hunt, 1988, pp. 607–609). More recently there have been high profile scandals, such as the KPMG tax shelter fraud case (Herman, 2004, Johnston, 2004 and Scannell, 2005), which have highlighted problems caused by differences in ethical judgements among corporate decision makers. Nevertheless, studies which examine systematically tax decision making processes are rare (see Glaister & Frecknall-Hughes, 2008), and, to the best of our knowledge, there are no prior studies which examine such issues from a cross-national perspective. The purpose of this paper is to make a contribution by examining tax-related ethical issues facing firms in two different national contexts. The study examines responses to a series of ethical tax related questions posed to a sample of UK and Turkish corporate respondents. These two countries were chosen as they provide good examples of legal and commercial frameworks and institutions that are at different stages of development, with the UK being a mature market economy and Turkey being an emerging one. In addition, the systems of each country are well known to the authors. The study serves to facilitate an examination of responses from within each country, but, more importantly, it allows a cross-national comparison of ethics and taxation, and makes a significant contribution in the provision of cross-country information on company tax matters. Processes and procedures to determine a company's tax liabilities are imposed by law. Where taxpayers (corporate or otherwise) wish to pay less than a government requires, a conflict arises, long recognised, between the right of citizens to own property (including goods and money) which militates against the right of government to allow that right of ownership and/or to take away that property in the form of taxation (Locke, 1690). This conflict manifests itself as tax evasion, which is illegal, or tax avoidance, which is legal. Although tax avoidance is legal, it is often regarded as unethical, for example, by the UK Revenue authorities, and is something of which firms (especially multinational enterprises (MNEs)) are often accused (Christensen and Kapoor, 2004, Christensen and Murphy, 2004, Freedman, 2004, Mitchell and Sikka, 2005, Mitchell et al., 2002 and Reed, 2007). Given that tax evasion is illegal, this paper focuses on the area of tax avoidance, where there is no legal certainty to determine where the line is drawn between what is or is not acceptable. Considering corporate taxes, a particular issue that has attracted significant criticism is that of ‘unacceptable tax avoidance’ (Wyman, 1997, p. 3). This is a term that tax authorities apply to the use of specially developed schemes, often aggressive in nature, which either stretch the word of the law beyond its intention or manipulate events/facts so that the law applies (in a way not intended) to artificially created truths, events or circumstances. The suggestion implicit in the use of the word ‘unacceptable’ compounds the idea that such tax avoidance activity is unethical (see Freedman, 2004) as it reduces the overall tax revenue for governments and thus the funds available for spending for societal purposes. Although tax avoidance remains a legal activity, because of the link with unacceptable behaviour it has become tainted by association, which is arguably deliberate on the part of tax authorities. The situation is made more complex in that views have often differed as to what constitutes tax avoidance, and such views may change over time. The meaning of ‘unacceptable avoidance’ remains a hotly debated topic. One view is that any decision “comes down to a matter of personal judgment. One man's idea of acceptable tax planning is undoubtedly another man's idea of criminally subversive activity” (Gillett, 1999, p. 1). Others think that there is no problem here at all and that “tax avoidance is a conceptual anomaly that exists in the mind of those whose sense of morality is violated by certain effective tax practices”, occurring “where legislative intention and policy miscarried and failed to anticipate and reach the transaction under consideration” (Orow, 2004, p. 415). For any study examining the behaviour of firms in relation to taxation, it is therefore essential to establish how important obeying the law is, and whether it is acceptable to challenge the law by use of avoidance schemes which tax authorities might deem inappropriate, and also whether, as a corollary, firms will be concerned about the impact of their taxation activities on their reputation. The rest of the paper is set out as follows. Section 2 reviews literature relating to differences between Turkey and the UK in respect of issues relevant to tax. The section then considers ethics and tax issues affecting firms, in order to provide background to the study and to help generate the study's basic research questions. Research methods are in Section 3. Section 4 provides findings and discussion. The conclusion is in Section 5.

This study presents findings on responses to a set of ethical issues relating to taxation from tax practitioners employed in UK firms and Turkish firms. The paper therefore makes a significant contribution to the academic literature in obtaining and analysing data from tax professionals to provide a cross-national study. Fundamentally important to both groups of practitioners is obeying the law on taxation and being able to defend publicly what the organisation has done. As postulated in the study's basic research questions, however, we have discovered differences in perceptions between the two country groups. Our underlying assumption is that these differences arise from the economic structural differences between the two groups of tax practitioners and the different level of sophistication in tax law. An understanding of these issues is important because the operation of the legislation relating to taxation has to be understood and accepted by the affected parties, and importantly, governments have to be able to raise the required levels of tax revenue without significantly alienating major stakeholder groups, including the business community. Greater insight into how ethical views on taxation arise and differ between countries may be used to enhance the credibility and effectiveness of the tax regimes involved and enhances efforts at international tax harmonisation. We have drawn on the prior literature and interviews to derive a set of ethical issues relating to taxation. Further research can explore these individual issues in more detail but could also usefully identify other areas of ethical concern not explored here. For Western economies tax ethics is explicitly dominated by the issue of tax avoidance, but it is unclear whether this is as explicit in dominating tax ethics in emerging markets. It would be beneficial in future research to identify what this key issue is. A limitation of the study is that the findings may not be generalisable, given that perceptions were investigated in only two countries, although these are used as proxies for developed and emerging economies. Future studies could usefully examine other country combinations in order to explore whether there are sets of differences common to those identified in this study. Comparing another advanced market economy and another emergent market economy would be useful in helping to generalise the findings, but broader studies investigating similarities and differences between groups of countries would be particularly valuable in generating a deeper insight on ethics and taxation. As our study considers corporate bodies, it would be very difficult to find a way of evaluating corporate tax morale, and, indeed, culture, as we can only seek the views of individuals who own and/or manage firms. While a company is a legal person, it cannot take any actions itself, and cannot express opinions independently of the people who run it. It would therefore be very difficult to attempt to assess corporate tax morale, or indeed, corporate culture. Thus we have not attempted to do this, since the focus of the study is on how firms deal with and apply tax law as it affects the corporate body. Possible consequences of seeking company data from employees/managers are that they will give their own personal view and/or will give the responses that they think are to the company's advantage or are socially desirable. However, this is a potential problem for all studies which seek company data via employees/managers, not this one alone. We feel, however, that this was precluded to a large degree here by seeking out the most senior and knowledgeable informants in target companies, who would be accustomed to represent their companies and, given the guarantee of anonymity and non-attribution of responses that was provided, honestly provide truthful company data.