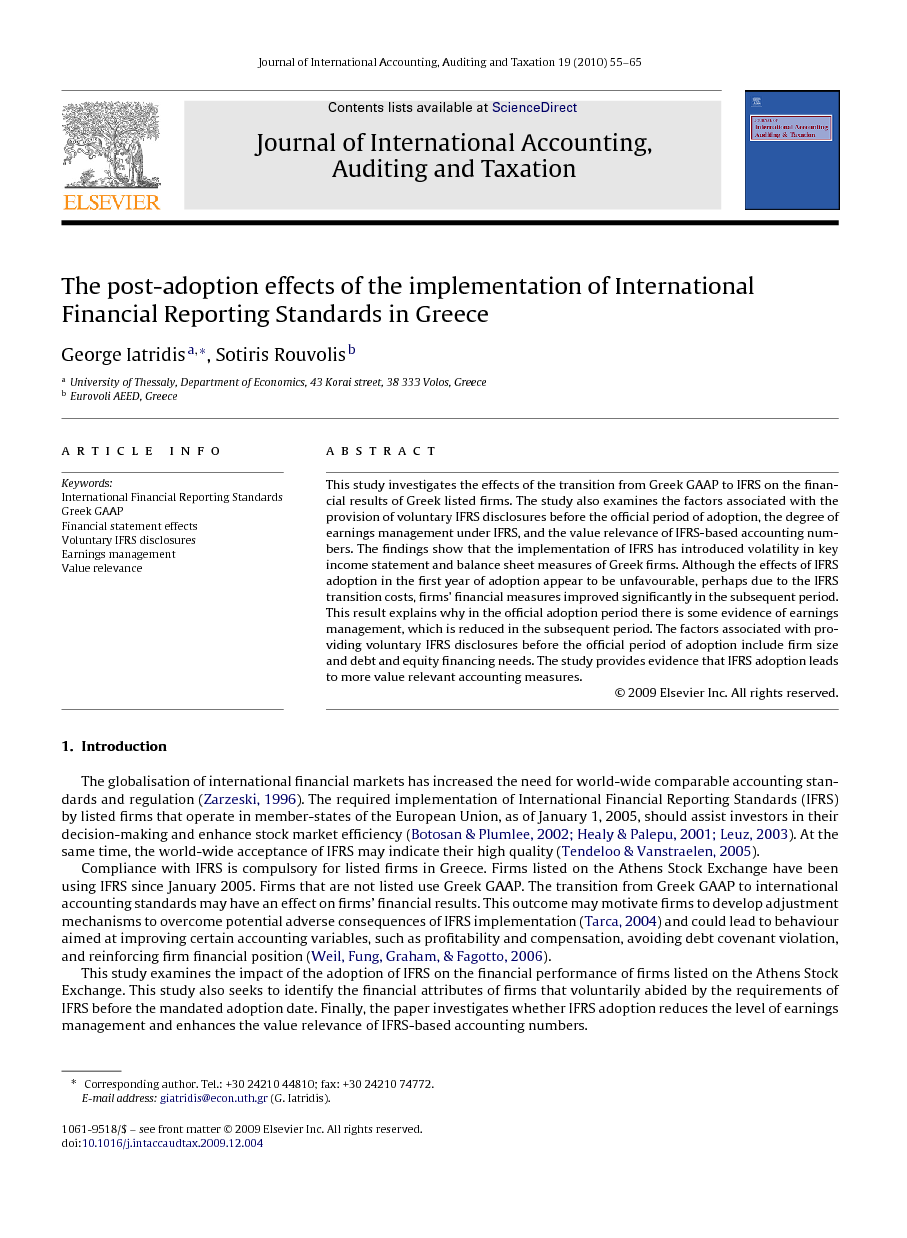 This study investigates the effects of the transition from Greek GAAP to IFRS on the financial results of Greek listed firms. The study also examines the factors associated with the provision of voluntary IFRS disclosures before the official period of adoption, the degree of earnings management under IFRS, and the value relevance of IFRS-based accounting numbers. The findings show that the implementation of IFRS has introduced volatility in key income statement and balance sheet measures of Greek firms. Although the effects of IFRS adoption in the first year of adoption appear to be unfavourable, perhaps due to the IFRS transition costs, firms’ financial measures improved significantly in the subsequent period. This result explains why in the official adoption period there is some evidence of earnings management, which is reduced in the subsequent period. The factors associated with providing voluntary IFRS disclosures before the official period of adoption include firm size and debt and equity financing needs. The study provides evidence that IFRS adoption leads to more value relevant accounting measures.

The globalisation of international financial markets has increased the need for world-wide comparable accounting standards and regulation (Zarzeski, 1996). The required implementation of International Financial Reporting Standards (IFRS) by listed firms that operate in member-states of the European Union, as of January 1, 2005, should assist investors in their decision-making and enhance stock market efficiency (Botosan and Plumlee, 2002, Healy and Palepu, 2001 and Leuz, 2003). At the same time, the world-wide acceptance of IFRS may indicate their high quality (Tendeloo & Vanstraelen, 2005). Compliance with IFRS is compulsory for listed firms in Greece. Firms listed on the Athens Stock Exchange have been using IFRS since January 2005. Firms that are not listed use Greek GAAP. The transition from Greek GAAP to international accounting standards may have an effect on firms’ financial results. This outcome may motivate firms to develop adjustment mechanisms to overcome potential adverse consequences of IFRS implementation (Tarca, 2004) and could lead to behaviour aimed at improving certain accounting variables, such as profitability and compensation, avoiding debt covenant violation, and reinforcing firm financial position (Weil, Fung, Graham, & Fagotto, 2006). This study examines the impact of the adoption of IFRS on the financial performance of firms listed on the Athens Stock Exchange. This study also seeks to identify the financial attributes of firms that voluntarily abided by the requirements of IFRS before the mandated adoption date. Finally, the paper investigates whether IFRS adoption reduces the level of earnings management and enhances the value relevance of IFRS-based accounting numbers. The study examines the periods before and after the official adoption of IFRS. The focus of the study is on firms that adopted IFRS after 2005 (mandatory IFRS adopters) and on firms that provided voluntary IFRS disclosures before the official implementation of IFRS (voluntary IFRS disclosers). Before 2005, firms had to abide by the Greek GAAP. There was no option to voluntarily adopt IFRS before 2005. Thus, voluntary IFRS disclosers are firms that prior to 2005 used the Greek GAAP and simultaneously provided disclosures on IFRS in a voluntary manner. The study shows that in the year of first adoption, 2005, firms tended to exhibit lower key accounting measures, such as profitability, liquidity and growth, most likely due to the fair value orientation of IFRS and the associated transition costs. In the subsequent year, firms displayed improved financial measures. The provision of voluntary IFRS disclosures before the official adoption period is associated with large size and strong debt and equity financing needs. The scope for earnings management is significantly reduced in the post-adoption period while in their first adoption year, firms tended to manage their accounting numbers in an effort to mitigate adverse results from the adoption of IFRS. The findings also show that the use of IFRS appeared to lead to accounting measures with higher value relevancy. The remainder of the study is organised as follows. Section 2 presents the background of the study. Section 3 discusses the research hypotheses. Section 4 describes the data while Section 5 discusses the results, and Section 6 presents the conclusions.

This study investigates the effects of the change from Greek GAAP to IFRS on the financial results of firms listed on the Athens Stock Exchange. The findings show that the IFRS implementation effects in the official adoption period, 2005, were unfavourable in terms of profitability and liquidity. In 2006, firms reported better financial performance measures in terms of profitability and future growth prospects, perhaps because they became more familiar with and adjusted to IFRS. The study shows that a number of firms provided voluntary IFRS disclosures before the official adoption period. The factors associated with voluntarily providing IFRS-based accounting information include large size and strong debt and equity financing needs. In their search for capital, voluntary IFRS disclosers may have believed they were providing lenders and investors evidence of credibility and quality in their reported financial numbers. The study also finds that in the official adoption period, there is some evidence of earnings management. It is possible that in light of significant IFRS transition costs, firms may manage their accounting numbers in order to mitigate potential adverse effects of IFRS adoption. In the subsequent period, however, the level of earnings management is significantly reduced. Finally, the implementation of IFRS provides more value relevant accounting measures in the second year of adoption compared to the official adoption year. In the second year of adoption, the nature and requirements of IFRS would be clearer, the process of implementing IFRS would be more familiar to users, while the impact of IFRS on firm accounting numbers would be displayed in a more evident and visible manner. This study examines how firms that operate in a non-common-law country, Greece, which is stakeholder-based, respond to IFRS adoption as compared to shareholder-based systems. The literature reports that shareholder-based systems tend to exhibit similarities with IFRS and higher value relevance than stakeholder-based systems (Ali and Hwang, 2000 and Ball et al., 2000). Hence, firms that operate in shareholder-based systems are more familiar with IFRS requirements and would subsequently experience less transition costs. Future research should compare the Greek IFRS experience with common-law countries and/or other non-common-law countries. The study is useful for accounting standard setters, especially when they prepare or review a change in accounting regulation. The findings would shed some light on the effects of IFRS adoption on Greek firms and enable accounting regulators to set accounting rules that ease the transition to IFRS and reduce information asymmetry and earnings management. The study would also benefit investors inside Greece when they assess the impact of IFRS on Greek accounts and review their investment strategy, as well as investors outside Greece when they compare the Greek experience with that of other countries or when they consider entering into capital markets that are to adopt IFRS. The main limitation of the study relates to the consideration that the behaviour and choices of managers may not always be observable. For example, it may be difficult to determine whether firms influence their financial results for opportunistic purposes or to smooth their transition to IFRS. Thus, the measures that are employed in the analysis should only be considered as proxies for the attributes that are examined in the study. The effects of IFRS adoption would vary from country to country, depending on the accounting system in use, the corporate culture and practice, and the legal and economic environment.