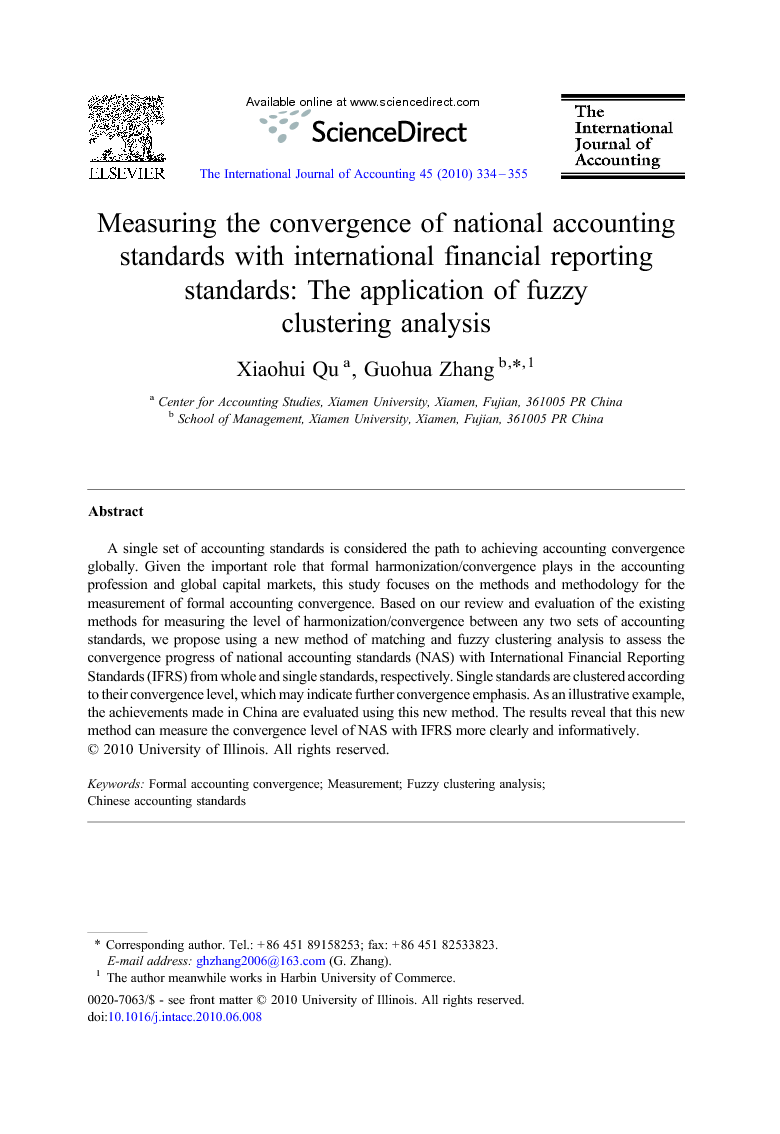 A single set of accounting standards is considered the path to achieving accounting convergence globally. Given the important role that formal harmonization/convergence plays in the accounting profession and global capital markets, this study focuses on the methods and methodology for the measurement of formal accounting convergence. Based on our review and evaluation of the existing methods for measuring the level of harmonization/convergence between any two sets of accounting standards, we propose using a new method of matching and fuzzy clustering analysis to assess the convergence progress of national accounting standards (NAS) with International Financial Reporting Standards (IFRS) from whole and single standards, respectively. Single standards are clustered according to their convergence level, which may indicate further convergence emphasis. As an illustrative example, the achievements made in China are evaluated using this new method. The results reveal that this new method can measure the convergence level of NAS with IFRS more clearly and informatively.

Based on the previous calculation and analysis, we conclude that CAS has achieved its goal of substantial convergence with IFRS from the whole. The overall convergence level of CAS with IFRS calculated by matching coefficients is 0.7497, larger than 0.7, thus proving the substantial convergence of CAS with IFRS. When membership degree λ is assigned at 0.86, all cases are categorized into one. The result also reveals the ranks of a single standard's convergence level and indicates the emphasis of future efforts in bringing CAS further toward international convergence, even though the results reveal that the convergent level of CAS with IFRS is very high. However, in the long run, differences between CAS and IFRS will remain. The substantial convergence for most standards and the subtle differences for few also embodies characteristics of CAS in its development, especially considering the ongoing cooperation between IASB and FASB. Meanwhile, the revising processes of the IASB on IAS24, IFRS3, and others have been reducing and, in some cases, even eliminating the relative differences. Our example demonstrates that the new method of fuzzy clustering analysis cannot only assess the convergence progress of NAS with IFRS from the whole, but can cluster single standards according to their convergence level and can even indicate further convergence emphasis. This makes up for the flaws existing in the extant research, and makes it suitable for use in analyzing the convergence among different standards (horizontal) or the progress achieved within one standard (vertical). Measuring formal accounting standards convergence by fuzzy clustering analysis remains in an exploratory stage. Due to the fact that there are still some personal judgments in comparison items' choosing and value assignment, although achievements made by other researchers are also referenced in our study, there still may exist some bias of researchers. We hope our study will make a contribution in advancing the study of formal convergence and enable other researchers to make further progress in this field.