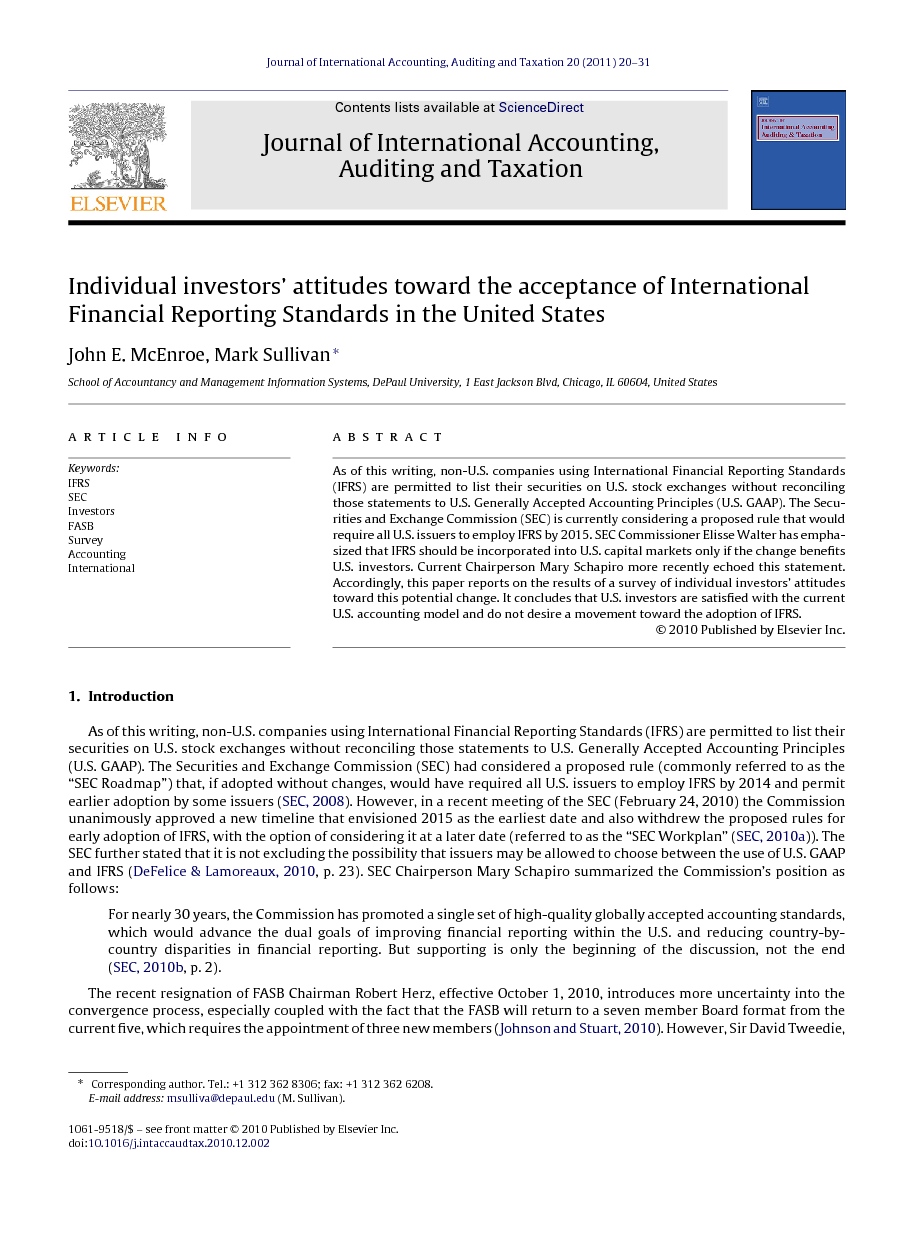 As of this writing, non-U.S. companies using International Financial Reporting Standards (IFRS) are permitted to list their securities on U.S. stock exchanges without reconciling those statements to U.S. Generally Accepted Accounting Principles (U.S. GAAP). The Securities and Exchange Commission (SEC) is currently considering a proposed rule that would require all U.S. issuers to employ IFRS by 2015. SEC Commissioner Elisse Walter has emphasized that IFRS should be incorporated into U.S. capital markets only if the change benefits U.S. investors. Current Chairperson Mary Schapiro more recently echoed this statement. Accordingly, this paper reports on the results of a survey of individual investors’ attitudes toward this potential change. It concludes that U.S. investors are satisfied with the current U.S. accounting model and do not desire a movement toward the adoption of IFRS.

Our research results indicate that individual investors are not supportive of the movement to IFRS. They also do not regard IFRS as either superior to or a viable substitute for U.S. GAAP. For example, they agree that if foreign firms employ IFRS, they should provide a reconciliation to U.S. GAAP as a listing condition, which is contrary to the current policy. Furthermore, they believe that foreign firms that use an accounting model that is neither U.S. GAAP nor IFRS should not be allowed to be listed in the U.S., even with a reconciliation to U.S. GAAP. This view is also opposite of the current U.S. listing policy. In regard to listing requirements for U.S. firms, an overwhelming majority of the investors agree that the firms should be required to employ U.S. GAAP, not be allowed the option to employ IFRS as an alternative, and not be required to use IFRS. In the area of the roles of external entities in standard setting, the investors do not feel that the SEC's function should be reduced, but agree that national governments and the non-U.S. private sector should have less influence on IFRS standard setting. In addition, although the respondents agree that principles-based accounting standards offer management more flexibility than rules-based standards, they do not perceive that financial reporting should move in that direction. They also do not feel that the IASB would issue higher quality accounting standards than the FASB. Last, in the realm of cost versus benefit of international initiatives, the investors do not perceive that the benefit of exempting foreign firms from filing the reconciliation do not exceed the cost of associated with interpreting the information. They also do not believe the benefit of adopting IFRS either exceeds the cost of the loss of U.S. control over accounting standard development or the costs of the transition to IFRS. In summary, results clearly manifest that individual investors are very satisfied with the current U.S. accounting model, and U.S. GAAP. This inclination of individual investors is consistent with the apparent inclination of many who commented on the Roadmap reported by Hansen (2009). In particular, they favor a rules-based system in which the FASB serves as the promulgator of the accounting standards, and, as such, they do not desire a movement toward the adoption of IFRS. 5.1. Limitations These results are based on an attitudinal survey of a sample of individual investors. As with any survey, there is a question concerning whether the survey results are indicative of the attitudes of the broader population of individual investors. This concern is aggravated by the fact that, for practical reasons, we limited our population to members of AAII which, in turn, may not be representative of individual investors as a whole. A second important limitation of the paper is that, even though some suggest that the opinions of individual investors should be an important factor in any decision to migrate to IFRS, arguably opinions of others who control a larger portion of investment funds should be given greater weight.