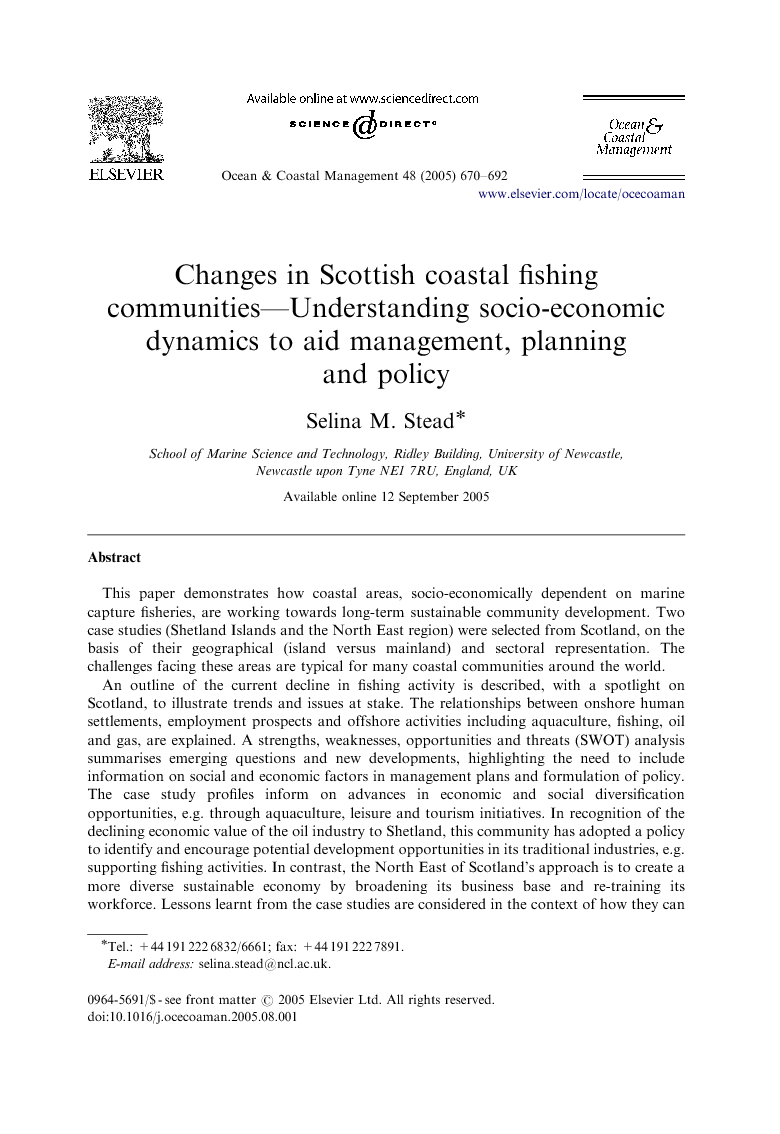 This paper demonstrates how coastal areas, socio-economically dependent on marine capture fisheries, are working towards long-term sustainable community development. Two case studies (Shetland Islands and the North East region) were selected from Scotland, on the basis of their geographical (island versus mainland) and sectoral representation. The challenges facing these areas are typical for many coastal communities around the world. An outline of the current decline in fishing activity is described, with a spotlight on Scotland, to illustrate trends and issues at stake. The relationships between onshore human settlements, employment prospects and offshore activities including aquaculture, fishing, oil and gas, are explained. A strengths, weaknesses, opportunities and threats (SWOT) analysis summarises emerging questions and new developments, highlighting the need to include information on social and economic factors in management plans and formulation of policy. The case study profiles inform on advances in economic and social diversification opportunities, e.g. through aquaculture, leisure and tourism initiatives. In recognition of the declining economic value of the oil industry to Shetland, this community has adopted a policy to identify and encourage potential development opportunities in its traditional industries, e.g. supporting fishing activities. In contrast, the North East of Scotland's approach is to create a more diverse sustainable economy by broadening its business base and re-training its workforce. Lessons learnt from the case studies are considered in the context of how they can aid current developments in policy such as the UK's efforts towards implementing the European Commission's recommendations on ICZM.

The findings from the two case studies highlight the importance of identifying and understanding the functions of cultural, economic, environmental, scientific and social issues that impact coastal communities. Many studies examining development opportunities in particular areas tend to rely on easily measurable quantitative indicators, such as changes in employment and income. However, understanding stakeholders attitudes, behaviour, perceptions and priorities are key for informed strategic planning initiatives. Furthermore, both landward (e.g. human settlements) and seaward (e.g. fish stocks) factors need to be examined together and not in isolation. Through exploring these issues and factors, it is possible to inform policy-making and practical implementation measures, such as opportunities for economic diversification, that could support the future sustainable development of communities socially economically dependent on marine resources under threat, like many of those dependent on marine fish stocks around the world. Innovative and well-researched diversification options that are based on a thorough understanding of local characteristics can counteract pressures such as economic competition, social instability and unemployment. This is fundamental to attaining long-term sustainable livelihoods which in turn will support viable industries and help build stronger communities. Success in achieving this goal relies on encouraging and maintaining involvement of all parties concerned and interested. This is a pre-requisite for developing effective and meaningful policy and implementation options such as is advocated by the principles of ICZM [13], [14], [18] and [20].