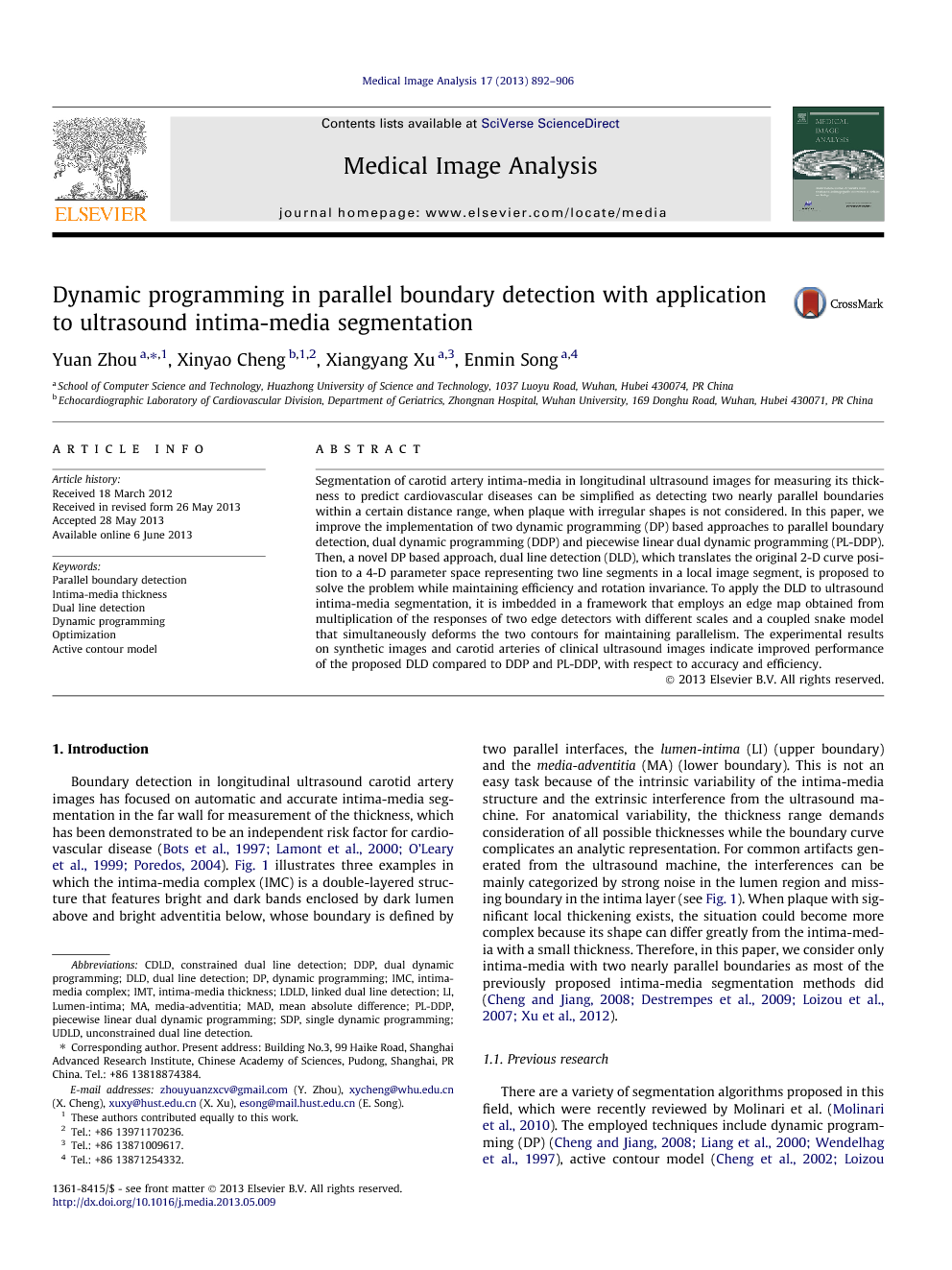 Segmentation of carotid artery intima-media in longitudinal ultrasound images for measuring its thickness to predict cardiovascular diseases can be simplified as detecting two nearly parallel boundaries within a certain distance range, when plaque with irregular shapes is not considered. In this paper, we improve the implementation of two dynamic programming (DP) based approaches to parallel boundary detection, dual dynamic programming (DDP) and piecewise linear dual dynamic programming (PL-DDP). Then, a novel DP based approach, dual line detection (DLD), which translates the original 2-D curve position to a 4-D parameter space representing two line segments in a local image segment, is proposed to solve the problem while maintaining efficiency and rotation invariance. To apply the DLD to ultrasound intima-media segmentation, it is imbedded in a framework that employs an edge map obtained from multiplication of the responses of two edge detectors with different scales and a coupled snake model that simultaneously deforms the two contours for maintaining parallelism. The experimental results on synthetic images and carotid arteries of clinical ultrasound images indicate improved performance of the proposed DLD compared to DDP and PL-DDP, with respect to accuracy and efficiency.

This paper attempts to solve a problem, parallel boundary detection, which emerges in medical imaging applications such as boundary detection on carotid arteries in ultrasound images or the detection of spines in X-ray images. We improved the implementation of two previous methods, DDP and PL-DDP, to render them able to solve the problem in O(NM) complexity. Then, a novel DP based approach, LDLD with rotation invariance and approximately linear time complexity O(N), was proposed to approximate the boundaries using piecewise linear representation. We also embedded the LDLD into a framework for segmentation of intima-media in ultrasound images and validated the method through comparing it with DDP and PL-DDP on a dataset of 200 ROIs. To conclude this paper, we present some final remarks: 1. The cost function of LDLD is very similar to that of DDP and PL-DDP. All of them attempt to find two curves that pass through strong edges as many as possible while satisfying certain hard constraints; however, the form of the solution is quite different so that the edge direction can be used to reduce the computational cost. Moreover, because of the auxiliary edge directions in our solution, the algorithm can selectively detect boundaries of objects with desired patterns. 2. The robustness and accuracy of LDLD rely on an initial piecewise linear approximation and a subsequent snake refinement. The two steps could be a requirement of difficult medical imaging applications according to our experiments. The DDP may directly detect the two side boundaries accurately through imposing further constraints, e.g., a second order derivative, but this could add more parameters for training, and the speed would be hampered. 3. The proposed method is intended only for segmenting nearly parallel boundaries, which may limit its use for plaque. However, because plaque tends to grow into irregular shapes that are difficult to model analytically, few papers have focused on this topic. Actually, according to Fig. 13, we included some pathological cases with IMT > 1 mm, which may be identified as plaque by some clinicians. Although the method in this paper shows an improved accuracy and efficiency to some extent, it also brings some hidden parameters for tuning. This is a drawback of our method, but we think it is acceptable in clinical applications and, in practice, the selection of parameters is somewhat robust according to Section 6.3. 4. Finally, the LDLD can be extended in several aspects, e.g., changing the linkage from the soft constraint to a hard constraint, detecting two circular parallel boundaries via a polar transform of the original image. Although we apply the proposed LDLD only to intima-media segmentation in this paper, extension to other types of boundaries with edge directions pointing to different sides is intrinsic.