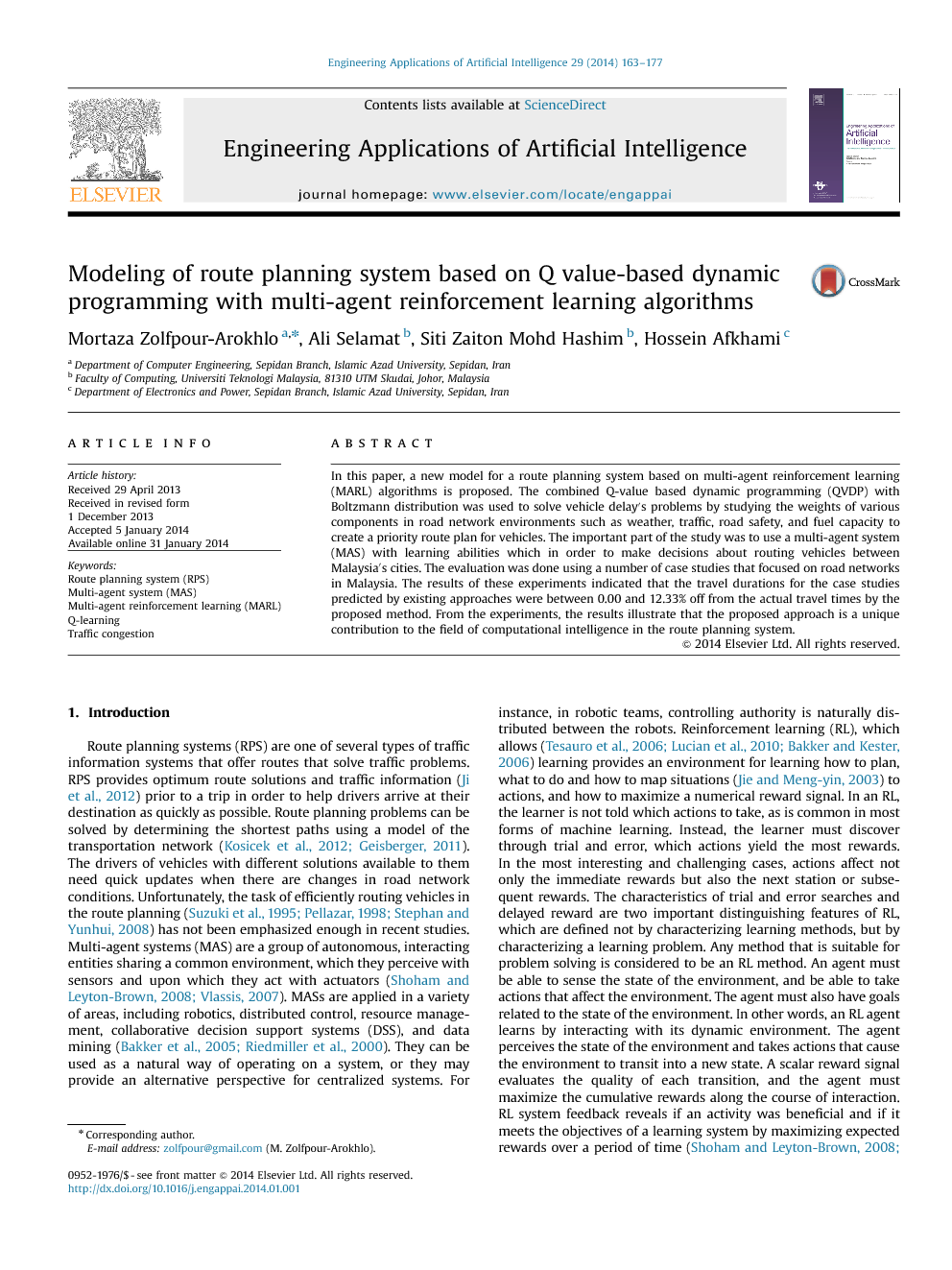 In this paper, a new model for a route planning system based on multi-agent reinforcement learning (MARL) algorithms is proposed. The combined Q-value based dynamic programming (QVDP) with Boltzmann distribution was used to solve vehicle delay's problems by studying the weights of various components in road network environments such as weather, traffic, road safety, and fuel capacity to create a priority route plan for vehicles. The important part of the study was to use a multi-agent system (MAS) with learning abilities which in order to make decisions about routing vehicles between Malaysia's cities. The evaluation was done using a number of case studies that focused on road networks in Malaysia. The results of these experiments indicated that the travel durations for the case studies predicted by existing approaches were between 0.00 and 12.33% off from the actual travel times by the proposed method. From the experiments, the results illustrate that the proposed approach is a unique contribution to the field of computational intelligence in the route planning system. Graphical abstract Comparison of the proposed and the existing method results based on Q value-based dynamic programming with multi-agent reinforcement learning algorithms. Full-size image (19 K)

In this study, the circumstances for applying agent-oriented techniques that focus on the use of RL methods for vehicle routing problem was presented for traffic networks. For this purpose, we presented a conceptual framework for route planning systems that would route vehicles based on MARL. This framework identified the various components of the issue, by calculating traffic routes using a number of agents in a static network situation and extended all this to a real dynamic network in Malaysia. The important achievement of the study was to resolve the RPS problems using simulation methods and MASs with learning abilities, in order to make decisions about routing vehicles between Malaysia's cities. This study presented a new paradigm that included new RPSA and Q-values based on MARL for finding the optimal path to reduce traffic congestion and conduct the vehicles to their destinations in the RTN. It also introduced a conceptual model of RPS using MARL in the RTN as well as showing that agent learning technology can optimize RPS for RTN by reviewing agent applications for RTN optimization. Illustrating how a MARL can optimize the performance and demonstrating how a MARL is a coupled network of software learning agents that interact to solve RTN problems beyond the knowledge of each individual problem solving component were two further achievements obtained by this study. This research has also demonstrated that agent technology is suitable for solving communication concerns in a distributed RTN environment. The novelty of this study is the use of MARL for RPS, which can be employed by RTN in Malaysia to offer access to RTN data resources. MARL attempted to solve RTN problems by collaborating between agents, resulting in answers to complex RTN problems. In this study, each agent performed a special function of the RTN and shared its knowledge with other agents. Given the above described results, our contributions are as follows: 1. The research work modeled a new route planning system based on QVDP with the MARL algorithm in order to reduce vehicle trip times and costs by giving a priority trip plan to vehicles. 2. The research uses the ability of learning models to propose several route alternatives to reduce time and minimize travel costs during driving. 3. The paper is important for vehicle trip planning by deploying the MAS to predict the road and environmental conditions. 4. The study provides high quality travel planning service to the vehicle drivers. 5. The paper had results with enough sizes and dimensions that included three important issues (RPS, MARL, and RTN) in Computer Science.