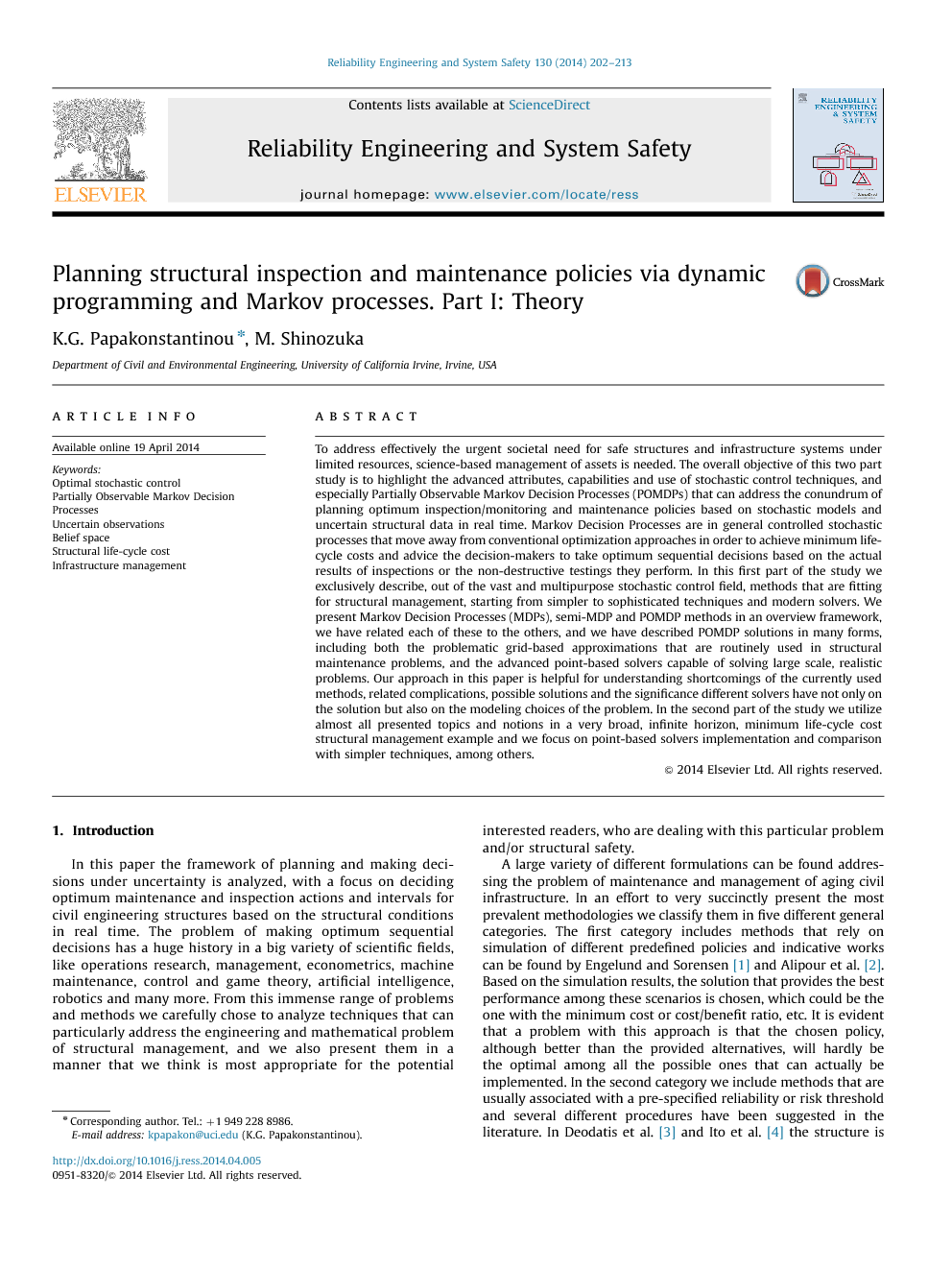 To address effectively the urgent societal need for safe structures and infrastructure systems under limited resources, science-based management of assets is needed. The overall objective of this two part study is to highlight the advanced attributes, capabilities and use of stochastic control techniques, and especially Partially Observable Markov Decision Processes (POMDPs) that can address the conundrum of planning optimum inspection/monitoring and maintenance policies based on stochastic models and uncertain structural data in real time. Markov Decision Processes are in general controlled stochastic processes that move away from conventional optimization approaches in order to achieve minimum life-cycle costs and advice the decision-makers to take optimum sequential decisions based on the actual results of inspections or the non-destructive testings they perform. In this first part of the study we exclusively describe, out of the vast and multipurpose stochastic control field, methods that are fitting for structural management, starting from simpler to sophisticated techniques and modern solvers. We present Markov Decision Processes (MDPs), semi-MDP and POMDP methods in an overview framework, we have related each of these to the others, and we have described POMDP solutions in many forms, including both the problematic grid-based approximations that are routinely used in structural maintenance problems, and the advanced point-based solvers capable of solving large scale, realistic problems. Our approach in this paper is helpful for understanding shortcomings of the currently used methods, related complications, possible solutions and the significance different solvers have not only on the solution but also on the modeling choices of the problem. In the second part of the study we utilize almost all presented topics and notions in a very broad, infinite horizon, minimum life-cycle cost structural management example and we focus on point-based solvers implementation and comparison with simpler techniques, among others.

In this paper, stochastic control approaches that are appropriate for infrastructure management and minimum life-cycle costs are analyzed. We briefly describe Markov Decision Processes (MDPs) as a foundation for the rest of the paper and we gradually advance to more sophisticated techniques, and modern solvers capable of solving large-scale, realistic problems. Particularly, we present the state-augmentation procedure, semi-MDPs, and their broader association with important notions, as well as Partially Observable MDPs (POMDPs) that can efficiently address significant limitations of alternative methods. We also examine solving techniques, from simple approximate solvers for POMDPs that are directly based on MDPs and can be straightforwardly utilized by available structural management programs, to the inadequate grid-based solvers which are excessively used for maintenance problems with POMDPs, and finally to advanced, modern point-based solvers with enhanced attributes, capable of solving larger scale problems. Overall, it can be easily recognized in the paper that POMDPs extend studies based on alternative concepts, such as the classic reliability/risk-based maintenance, and they do not impose any unjustified constraints on the policy search space, like periodic inspection periods, threshold performances, perfect inspections and many more. A clear disadvantage of POMDPs, however, is that they are difficult to be solved, especially for large models with many states, and this paper helps explain the significance of different POMDP solvers both on the solution and the modeling of the problem. Based on this Part I paper, the companion Part II paper, [17], utilizes almost all presented topics and notions in a demanding minimum life-cycle cost application, where the optimum policy for a deteriorating structure consists of a complex combination of a variety of inspection/monitoring types and intervals, as well as maintenance actions and action times.