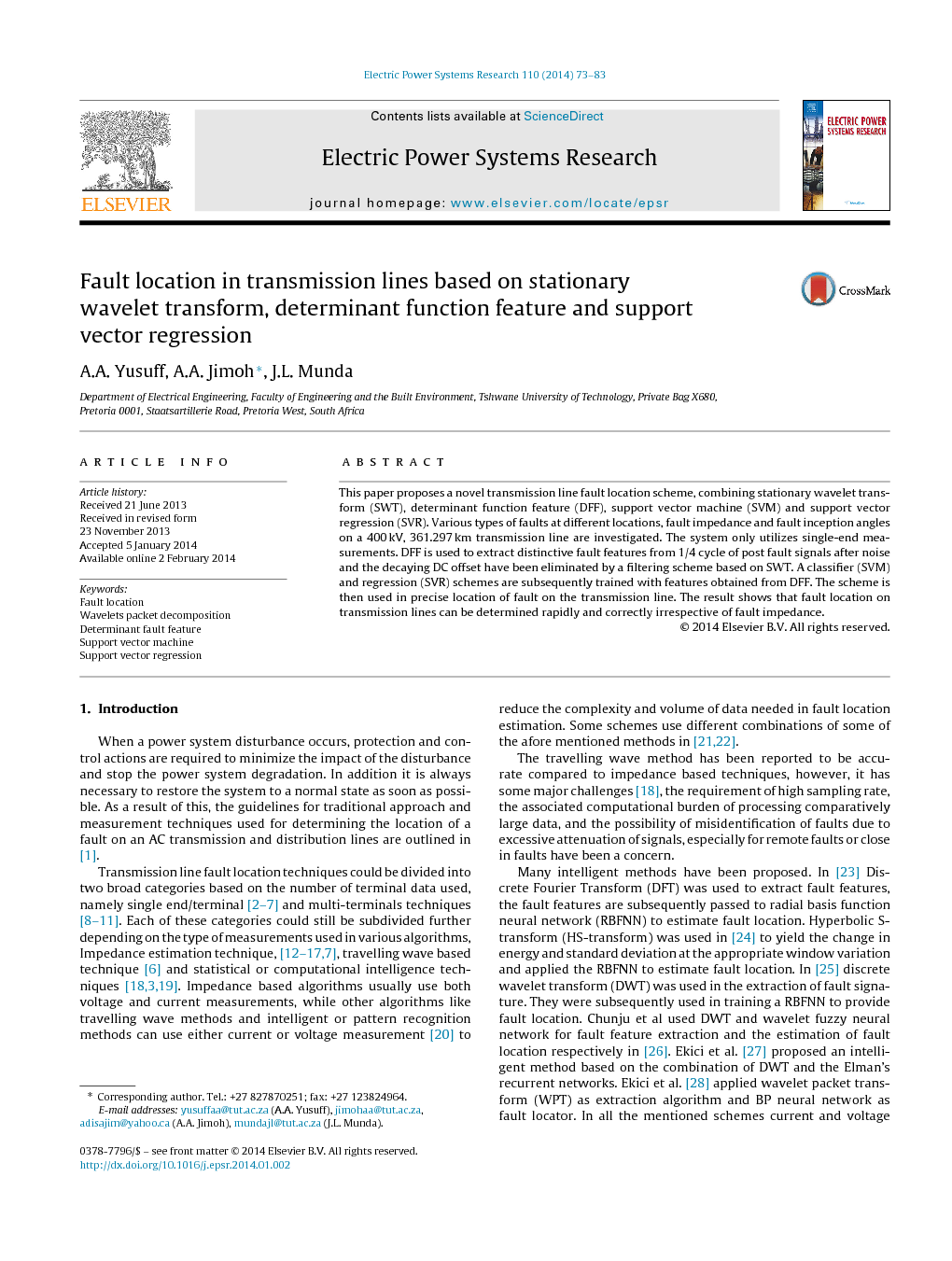 This paper proposes a novel transmission line fault location scheme, combining stationary wavelet transform (SWT), determinant function feature (DFF), support vector machine (SVM) and support vector regression (SVR). Various types of faults at different locations, fault impedance and fault inception angles on a 400 kV, 361.297 km transmission line are investigated. The system only utilizes single-end measurements. DFF is used to extract distinctive fault features from 1/4 cycle of post fault signals after noise and the decaying DC offset have been eliminated by a filtering scheme based on SWT. A classifier (SVM) and regression (SVR) schemes are subsequently trained with features obtained from DFF. The scheme is then used in precise location of fault on the transmission line. The result shows that fault location on transmission lines can be determined rapidly and correctly irrespective of fault impedance.

When a power system disturbance occurs, protection and control actions are required to minimize the impact of the disturbance and stop the power system degradation. In addition it is always necessary to restore the system to a normal state as soon as possible. As a result of this, the guidelines for traditional approach and measurement techniques used for determining the location of a fault on an AC transmission and distribution lines are outlined in [1]. Transmission line fault location techniques could be divided into two broad categories based on the number of terminal data used, namely single end/terminal [2], [3], [4], [5], [6] and [7] and multi-terminals techniques [8], [9], [10] and [11]. Each of these categories could still be subdivided further depending on the type of measurements used in various algorithms, Impedance estimation technique, [12], [13], [14], [15], [16], [17] and [7], travelling wave based technique [6] and statistical or computational intelligence techniques [18], [3] and [19]. Impedance based algorithms usually use both voltage and current measurements, while other algorithms like travelling wave methods and intelligent or pattern recognition methods can use either current or voltage measurement [20] to reduce the complexity and volume of data needed in fault location estimation. Some schemes use different combinations of some of the afore mentioned methods in [21] and [22]. The travelling wave method has been reported to be accurate compared to impedance based techniques, however, it has some major challenges [18], the requirement of high sampling rate, the associated computational burden of processing comparatively large data, and the possibility of misidentification of faults due to excessive attenuation of signals, especially for remote faults or close in faults have been a concern. Many intelligent methods have been proposed. In [23] Discrete Fourier Transform (DFT) was used to extract fault features, the fault features are subsequently passed to radial basis function neural network (RBFNN) to estimate fault location. Hyperbolic S-transform (HS-transform) was used in [24] to yield the change in energy and standard deviation at the appropriate window variation and applied the RBFNN to estimate fault location. In [25] discrete wavelet transform (DWT) was used in the extraction of fault signature. They were subsequently used in training a RBFNN to provide fault location. Chunju et al used DWT and wavelet fuzzy neural network for fault feature extraction and the estimation of fault location respectively in [26]. Ekici et al. [27] proposed an intelligent method based on the combination of DWT and the Elman's recurrent networks. Ekici et al. [28] applied wavelet packet transform (WPT) as extraction algorithm and BP neural network as fault locator. In all the mentioned schemes current and voltage measurements were used in feature extraction. In addition the size of data window used in feature extraction is either one cycle or more. The major disadvantage of using DFT for feature extraction, is that it can not give an accurate estimate of the fundamental frequency phasor in the presence of decaying DC offset [29]. Although a discrete cosine filter (DCF) could be used to circumvent the disadvantage of DFT, however DCF requires 5/4 cycle in data window size for filtering. In [30] it was shown that the performance of DWT compared to some other schemes used in phasor estimation, e.g. least error square (LES), DCF, etc. are not so good. One other disadvantage of DWT is that, it is not time shift invariant. This means that there is no correlation between the original signal and DWT coefficients. In [31] stationary wavelet transform (SWT) was used for filtering and feature extraction of post fault measurements on power transmission lines. In this paper we present a new fault location scheme for power transmission lines that uses a stationary wavelet transform for preprocessing and filtering. Fault signatures and features are then extracted by a determinant function and subsequently the fault signatures are passed to a classifier and regression scheme in order to estimate the fault location. A support vector machine (SVM) and support vector regression (SVR) are used as classifier and regression, respectively. One of the challenges in fault location scheme is the trade-off between the accuracy and data window size. Unlike other schemes that were highlighted earlier, which used a minimum of 1 cycle data window, the proposed scheme uses a data window that is adaptive; A signal with a fundamental frequency of 50 Hz, when sampled at 3.2 kHz will give 64 samples per cycle. The scheme does not need a full cycle data window to extract fault features, as long as the data window used is a multiple of 4. A meaningful fault signature could be extracted with a data window of 8 samples, 16 samples … N, where N is number of samples in a full cycle. Consequently, for a sampling rates greater than 3.2 kHz for a power system with a frequency of 50 Hz, a data window lower than 1/2 a cycle could be used. The method is demonstrated on 400 kV, 361.297 km transmission line section of a power system with a system frequency of 50 Hz. Various types of faults are initiated at different locations along the transmission line at various inception angles. The post fault phase data collected at line buses are first passed through a SWT scheme to remove noise and decaying DC offset. A determinant function is then used to extract fault signatures from the post fault data; and subsequently a SVR scheme is used as a regression to estimate the fault location. The results indicate that the proposed method can correctly and rapidly locate faults with different fault type and fault inceptions. This paper is organized into six (6) sections, the first section is an introduction. In Section 2 we discuss signal preprocessing and features extraction based on SWT and a determinant function and in Section 3 application of SVR is discussed. The new scheme and simulations are described in Section 4, while results and discussions are presented in Section 5. Finally, Section 6 is the conclusion.