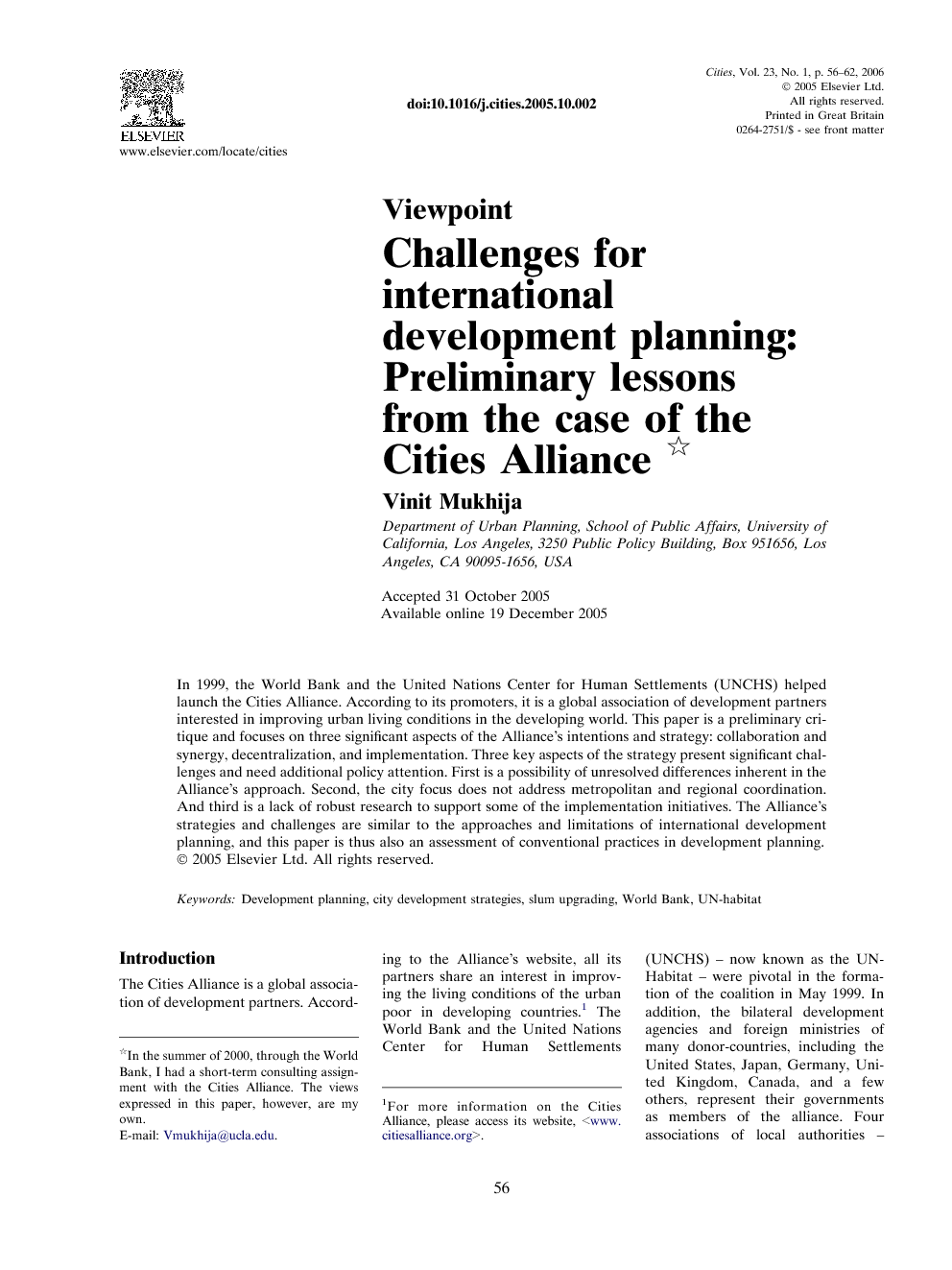 In 1999, the World Bank and the United Nations Center for Human Settlements (UNCHS) helped launch the Cities Alliance. According to its promoters, it is a global association of development partners interested in improving urban living conditions in the developing world. This paper is a preliminary critique and focuses on three significant aspects of the Alliance’s intentions and strategy: collaboration and synergy, decentralization, and implementation. Three key aspects of the strategy present significant challenges and need additional policy attention. First is a possibility of unresolved differences inherent in the Alliance’s approach. Second, the city focus does not address metropolitan and regional coordination. And third is a lack of robust research to support some of the implementation initiatives. The Alliance’s strategies and challenges are similar to the approaches and limitations of international development planning, and this paper is thus also an assessment of conventional practices in development planning.

Given the prevailing environment of fiscal constraints and limitations, the Cities Alliance is likely to be more effective if it becomes an agency of innovation and challenges the conventional policies of development planning.10 But the Alliance’s success will depend on its ability to manage the contradictions and meet the tests that are likely to rise in the process of it implementing its policies and agenda. As argued in this paper, many of the Alliance’s strategies and approaches need to be augmented and replaced with complementary and alternative approaches. First, I empathize with the Alliance’s approach to create synergy and meet the paradoxical demands of international development planning. However, to achieve success it must consider the possibility of disputes and conflicts of interest between its disparate group of international stakeholders. It must anticipate disagreements and clearly spell-out its priorities in likely conflictual situations. For example, the World Bank’s housing policy paper – Housing: Enabling Markets to Work – explicitly recommends that environmental concerns should not be used for slum clearance ( 1993, p. 47). Similarly, given the Alliance’s twin emphasis on economic development and housing improvements for the poor, it would be useful if it made an explicit statement that makes it clear that the Alliance will not prioritize economic development planning over slum upgrading possibilities. In addition, it should analyze how paradoxical and contradictory goals are met in practice and draw lessons from them. Nonetheless, the Alliance should also put in place conflict resolution procedures and mechanisms. Second, the Alliance should also explore opportunities for developing regional governance institutions and not focus only on citywide institutional arrangements. Theoretically, it might be possible to have politically and administratively decentralized units at the city level and still have the larger region function as a cohesive economic unit. In practice, however, implementing regional growth strategies and achieving cooperation is likely to be an uphill endeavor in the absence of regional governance institutions. Similarly, political decentralization has many advantages. In particular, its advocates point to the likelihood of greater efficiency and more responsive public service delivery because of competition among local governments. But the urban experience from the United States clearly indicates that decentralization can be a double-edged sword. In addition to cities and suburbs as decentralized political jurisdictions finding it difficult to develop strategies of cooperation once competition gets embedded in their institutional framework, there is likely to be greater social inequity and conflict in such regions. For the alliance, a more prudent approach would be to explicitly consider (and promote) regional development policies and metropolitan planning to augment the prevailing neoliberal push toward political, administrative and financial decentralization and balkanization. Moreover, the potential positive contribution of national policies should not be ignored through a singular focus on city-level institutions. Third, the Alliance should also take a lead in promoting productive urban research. There is an important need for challenging the conventional mindset that assumes that we know everything, and we just need to improve the sharing of information. Nonetheless, I agree that there is a need for better databases and easier access to information. Fortunately improvements in information technology indicate the possibility of better data sharing. However, to assume that there is little need for more research and analysis is a recipe for disaster and unintended outcomes. In this context, the Alliance should also reexamine the usefulness of pilot projects as a tool for learning and institutional reform. Finally, a key premise of this paper is that these challenges and criticisms are not limited to the Cities Alliance. On the contrary, and even though one of the stated objectives of the association is to influence changes in the development agenda and approach of its member organizations, I have tried to demonstrate that the Alliance is following the conventional wisdom of policies and prevailing approaches in international development planning. Thus this critique and the suggestions offered in the article are also relevant for the larger field of development planning. At the same time, the Alliance because of its unique position can provide some of the key players in international development planning an opportunity to move away from the conventional practices and experiment with alternative approaches. It is, however, unclear if the involved stakeholders are keen to use the opportunity.