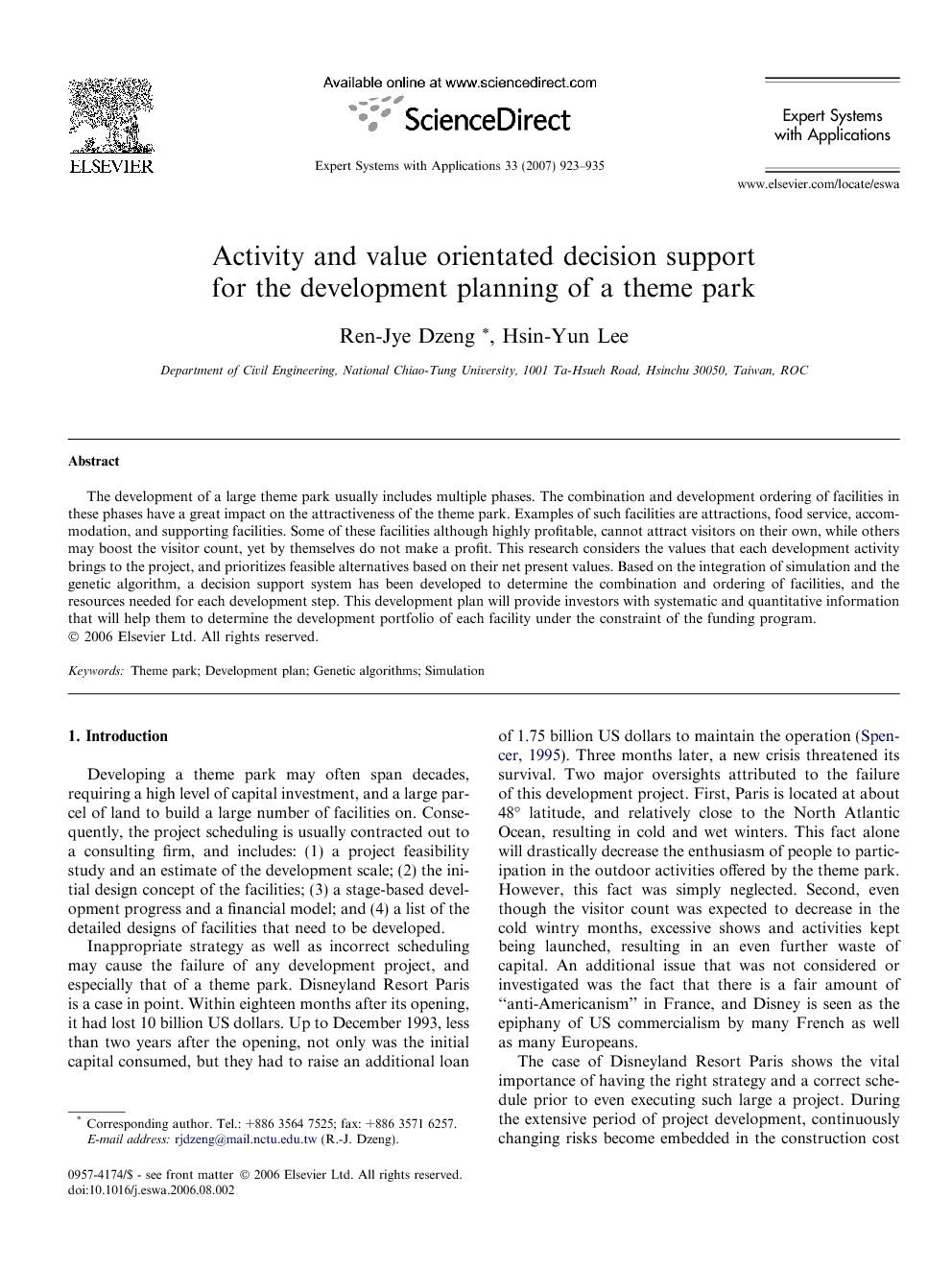 The development of a large theme park usually includes multiple phases. The combination and development ordering of facilities in these phases have a great impact on the attractiveness of the theme park. Examples of such facilities are attractions, food service, accommodation, and supporting facilities. Some of these facilities although highly profitable, cannot attract visitors on their own, while others may boost the visitor count, yet by themselves do not make a profit. This research considers the values that each development activity brings to the project, and prioritizes feasible alternatives based on their net present values. Based on the integration of simulation and the genetic algorithm, a decision support system has been developed to determine the combination and ordering of facilities, and the resources needed for each development step. This development plan will provide investors with systematic and quantitative information that will help them to determine the development portfolio of each facility under the constraint of the funding program.

Developing a theme park may often span decades, requiring a high level of capital investment, and a large parcel of land to build a large number of facilities on. Consequently, the project scheduling is usually contracted out to a consulting firm, and includes: (1) a project feasibility study and an estimate of the development scale; (2) the initial design concept of the facilities; (3) a stage-based development progress and a financial model; and (4) a list of the detailed designs of facilities that need to be developed. Inappropriate strategy as well as incorrect scheduling may cause the failure of any development project, and especially that of a theme park. Disneyland Resort Paris is a case in point. Within eighteen months after its opening, it had lost 10 billion US dollars. Up to December 1993, less than two years after the opening, not only was the initial capital consumed, but they had to raise an additional loan of 1.75 billion US dollars to maintain the operation (Spencer, 1995). Three months later, a new crisis threatened its survival. Two major oversights attributed to the failure of this development project. First, Paris is located at about 48 latitude, and relatively close to the North Atlantic Ocean, resulting in cold and wet winters. This fact alone will drastically decrease the enthusiasm of people to participation in the outdoor activities offered by the theme park. However, this fact was simply neglected. Second, even though the visitor count was expected to decrease in the cold wintry months, excessive shows and activities kept being launched, resulting in an even further waste of capital. An additional issue that was not considered or investigated was the fact that there is a fair amount of ‘‘anti-Americanism’’ in France, and Disney is seen as the epiphany of US commercialism by many French as well as many Europeans. The case of Disneyland Resort Paris shows the vital importance of having the right strategy and a correct schedule prior to even executing such large a project. During the extensive period of project development, continuously changing risks become embedded in the construction costaffecting the operation of each facility, as well as the relationship between facilities, especially those involving the supply of resources. The fact that the planner will have to consider multiple variable factors simultaneously is inevitable. This will make it very difficult to settle on an optimal development strategy among the multitude of combinations of potential facilities and scheduling plans. Therefore, support in the decision making process of the development schedule will aid the planner to better understand the influence of each variant on the project outcome, as well as the effectiveness of each schedule combinations, allowing him to determine the optimal development strategy. Various researches have focused on the issue of modeling the project decision-making and plan optimization, such as the Multi-Criteria Decision Model (e.g., Hsieh & Liu, 1997), Resource-Constrained Scheduling (e.g., Leu & Hwang, 2002), and the Ranking and Combination of the Project Investment Model (e.g., Ghasemzadeh & Archer, 2000). These models are unsuitable for theme park development projects because they cannot simultaneously deal with selection, ordering, and scheduling of feasible investment items. For example, Hsieh and Liu’s Time-series Combinatorial Planning Model in Infrastructure Plan (Hsieh & Liu, 1997) has two assumptions: (1) sub-projects are independent to each other, and (2) activities cannot be separated or partially completed. These two assumptions are unsatisfactory for a theme park development. Example 2, Most Resource-Constrained Scheduling models fail to consider the selection of activities (i.e., not every activity must be executed) but can only provide solutions with specified activities and resources. Example 3, Ghasemzadeh and Archer’s supporting system for decision making of a portfolio with multiple items (Ghasemzadeh & Archer, 2000) fails to consider potential situations when the start and finish dates of items are movable. This study is aimed at constructing a decision support system for the decision-making process when laying out the order of a development plan. The project planner inputs the activities, their start and finish dates, estimated costs and revenues, and resource relationships. All these data are simulated and analyzed in order to predict the overall effectiveness of the project. Various schedule combinations will be calculated to determine the best development strategy so as to provide the planner with a point of reference. This will help overcome the complexities of the decision-making in the development of a theme park facility. This study attempts to achieve its goal through the following approaches: (1) Investigate the characteristics of a theme park development project, the different types of facilities and their features, characteristics of different types of strategies and scheduling systems, and the demand, supply, and the effect of different facilities. (2) Construct a simulation network model of a theme park development project, that includes all the features and correlations of the activities involved in the planning, construction, and operation. (3) Integrate the polyploidy genetic algorithm (GA) and the simulation analysis to design a decision support system for determining the project strategy and schedule plan with the maximum net present value (NPV) for the reference of project investors and planners.

construction projects and optimization of financial portfolio. However, very few studies have been dedicated to the problem of theme park development, which requires consideration of both scheduling and portfolio optimization. This study analyzed the features of theme park development projects and divided the associated facilities into five categories. To facilitate the scheduler to develop the optimal project schedule, the proposed AVO-PLAN system integrates simulation and the GA to predict the NPV of each combination and determine the priorities of each facility with the GA. The priority values of each facility in each time unit are expressed with genetic coding, and the optimal development strategy and scheduling are determined after generations of evolutions. Since the focus of a theme park development project is the value of the investment items, and since there is a complicated demand-and-supply relationship between activities, the genetic coding with start and finish date of each activity may not reflect the importance of execution for each item. Unlike other studies of scheduling with the aid of the GA, AVO-PLAN incorporates the priority values of each development item in each time unit into genetic coding, so as to facilitate a quicker search of near-optimal solution via simulation. In addition, this study also combined the priority values of each time unit into a polyploidy genetic structure, which provides a better reflection of the Time-series than ordinary applications with haploid. The testing in our case study revealed that AVO-PLAN surpassed the experts by a faster search and a better NPV. With regards to the demand-and-supply relationship of the resources between activities; the experts couldnot provide a thorough consideration in their scheduling, while AVOPLAN integrates it completely into the project scheduling via simulation. Scheduling of theme park requires a considerable versatility of combination. In the past, its completion relied on the experience of experts. On the other hand, AVO-PLAN applies the GA to effectively figure out the near-optimal project scheduling for schedulers. Our proposed system can not only be applied to theme park development projects but also to the decision-making and scheduling portions of other projects that require staged or segmented execution, such as staged urban renewal projects.