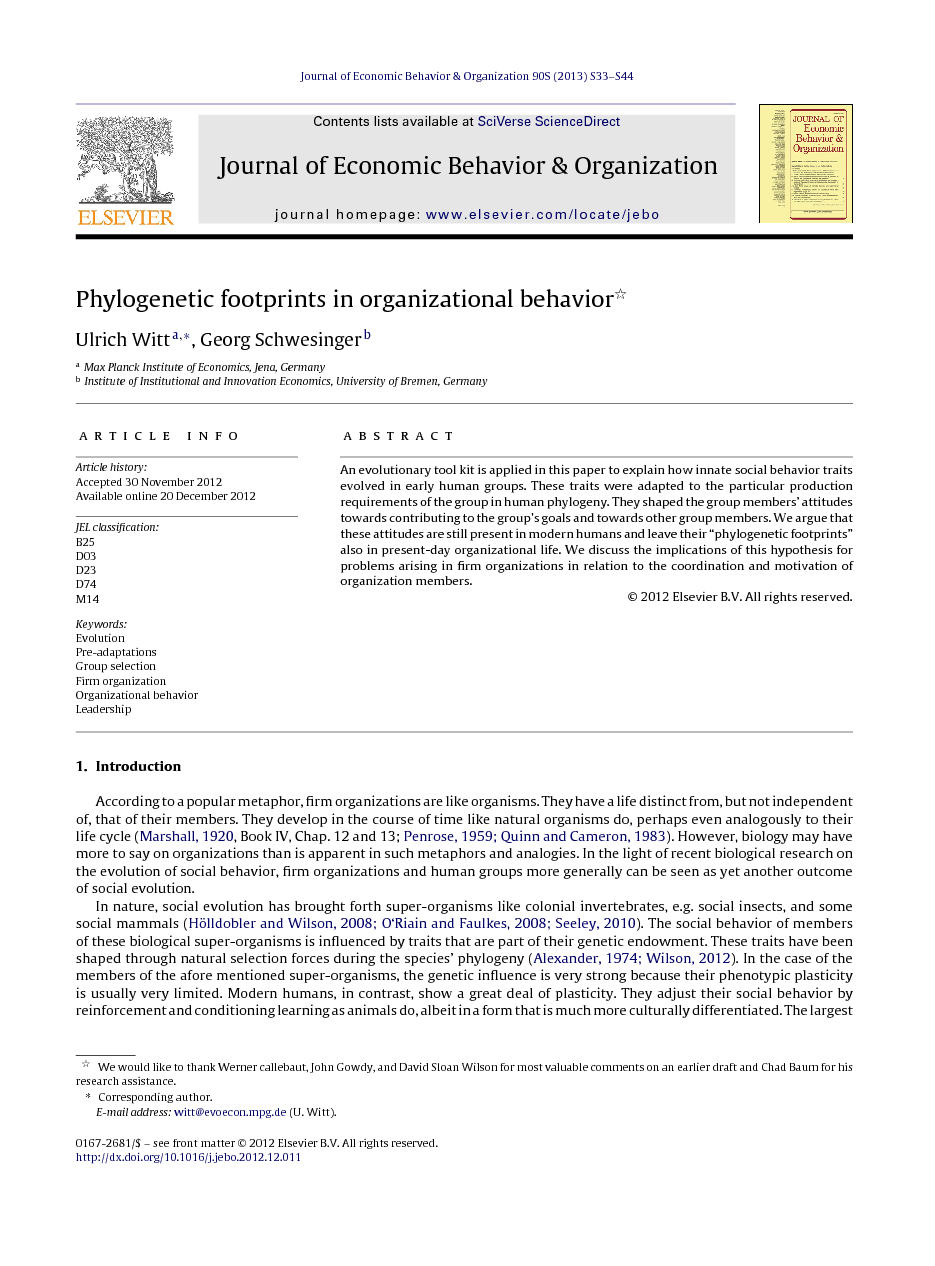 An evolutionary tool kit is applied in this paper to explain how innate social behavior traits evolved in early human groups. These traits were adapted to the particular production requirements of the group in human phylogeny. They shaped the group members’ attitudes towards contributing to the group's goals and towards other group members. We argue that these attitudes are still present in modern humans and leave their “phylogenetic footprints” also in present-day organizational life. We discuss the implications of this hypothesis for problems arising in firm organizations in relation to the coordination and motivation of organization members.

This paper has traced the “phylogenetic footprints” that can be observed in human social behavior in the context of organizations. Modern firm organizations crucially hinge on the social behavior and work attitudes of their members. We have shown how these are influenced by innate behavior traits that have been fixed at the times of early humans living in small bands. Modern humans do show a great deal of plasticity in their social behavior due to cognitive and reinforcement learning by which they adjust to the particular conditions of their social environment. However, the adjustments start from, and are constrained by, pre-adaptations which can therefore be expected to leave their mark also in the behavior of the members of modern organizations. These organizations are groups, after all – albeit more complex and often bigger ones than those of the early bands. The explanatory approach we have used to explore the relevance of the pre-adaptations for organizational life and for organizational designs draws on Wilson and Gowdy's (2013) evolutionary tool kit. In consequence, we focus on the functionality and emergence of phenomena that are a product of evolution. In this vein, we have outlined an explanation for the way in which groups – humans or non-humans – that serve a productive function have solved a dual problem. Independent of the particular historical time and context in which such groups operate, their members’ productive activities must first be coordinated toward jointly accomplishing the group's productive purpose. Second, their members must be motivated – intrinsically or extrinsically by incentives and controls – to contribute at an adequate level of effort in pursuit of that goal. The solution of the dual problem is essential for survival and the competitive position of groups. It is therefore likely that genetic and/or cultural adaptations favor groups with more effective solutions to the problem. We have discussed the emergence of two very different mechanisms by which group members have been coordinated and motivated under different historical production technologies. One is an informal egalitarian mechanism, the other a dominance-based, hierarchical one. We have outlined why it can be conjectured that the respective mechanisms have been functional under the specific conditions and therefore had adaptive value for the groups adopting them. We have explained, moreover, in which way the innate social behavior traits relate to the functionality and emergence of these mechanisms. We have then discussed in what modern guise the two mechanisms re-appear in present-day organizations, particularly firm organizations, and what their continued existence implies for the firms’ performance and competitive position. The different mechanisms have been argued to correspond to different pre-adaptations in human social behavior that affect, in particular, the style of leadership and the work motivation of the organization members. These behavioral pre-adaptations thus also leave their “phylogenetic footprints” in the form of constraints on organizational design and prevent switching back and forth between the two mechanisms. Finally, we have addressed the role of a key variable – organization size – for the two mechanisms. As was pointed out, an informal, egalitarian mechanism is contingent on a small group size. Consequently, when the size of the organization grows beyond a certain bound, special measures need to be taken if the intention is to keep that mechanism alive. This has interesting implications for organizational design that have been briefly explored.