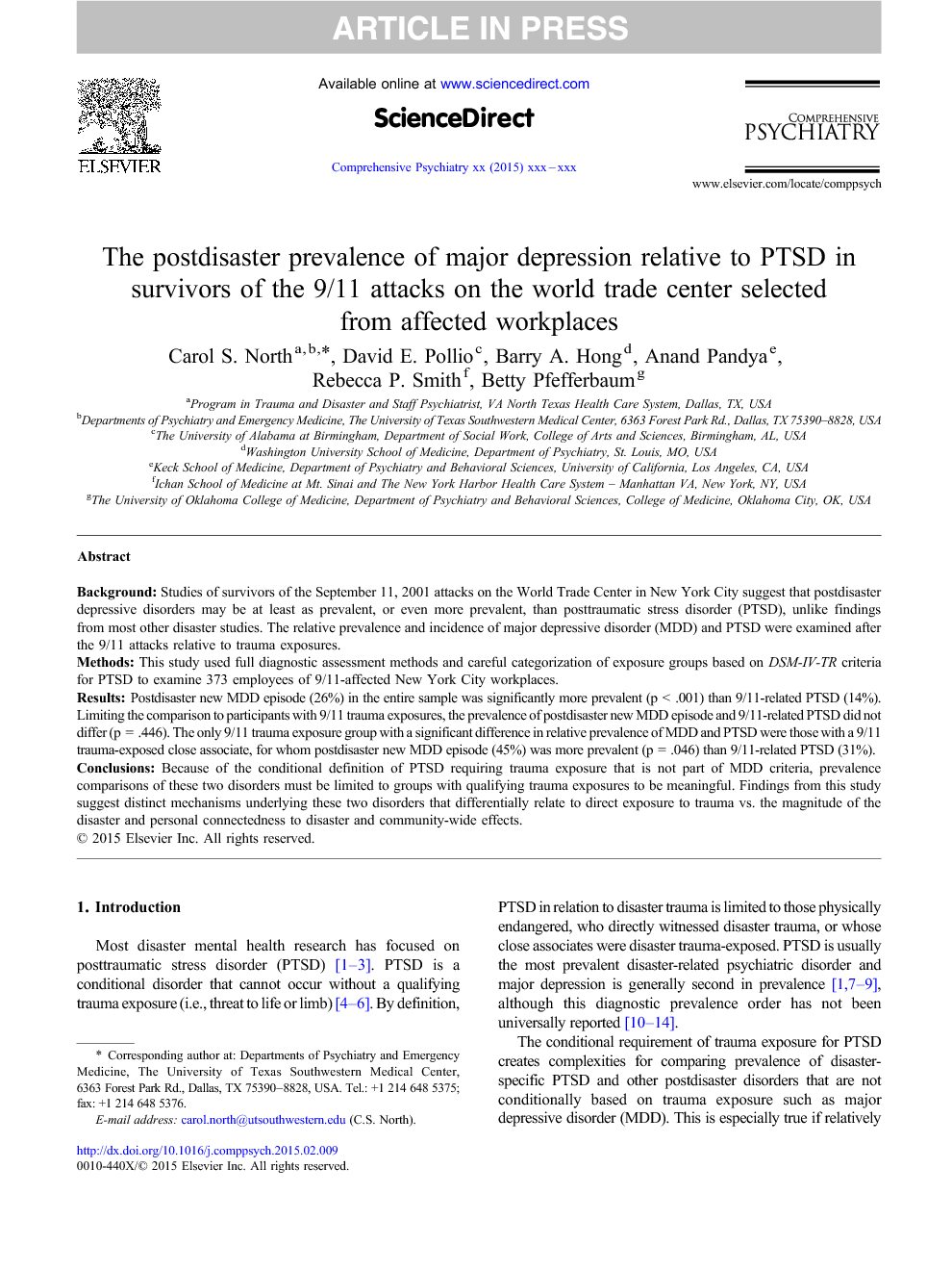 Background Studies of survivors of the September 11, 2001 attacks on the World Trade Center in New York City suggest that postdisaster depressive disorders may be at least as prevalent, or even more prevalent, than posttraumatic stress disorder (PTSD), unlike findings from most other disaster studies. The relative prevalence and incidence of major depressive disorder (MDD) and PTSD were examined after the 9/11 attacks relative to trauma exposures. Methods This study used full diagnostic assessment methods and careful categorization of exposure groups based on DSM-IV-TR criteria for PTSD to examine 373 employees of 9/11-affected New York City workplaces. Results Postdisaster new MDD episode (26%) in the entire sample was significantly more prevalent (p < .001) than 9/11-related PTSD (14%). Limiting the comparison to participants with 9/11 trauma exposures, the prevalence of postdisaster new MDD episode and 9/11-related PTSD did not differ (p = .446). The only 9/11 trauma exposure group with a significant difference in relative prevalence of MDD and PTSD were those with a 9/11 trauma-exposed close associate, for whom postdisaster new MDD episode (45%) was more prevalent (p = .046) than 9/11-related PTSD (31%). Conclusions Because of the conditional definition of PTSD requiring trauma exposure that is not part of MDD criteria, prevalence comparisons of these two disorders must be limited to groups with qualifying trauma exposures to be meaningful. Findings from this study suggest distinct mechanisms underlying these two disorders that differentially relate to direct exposure to trauma vs. the magnitude of the disaster and personal connectedness to disaster and community-wide effects.

Most disaster mental health research has focused on posttraumatic stress disorder (PTSD) [1], [2] and [3]. PTSD is a conditional disorder that cannot occur without a qualifying trauma exposure (i.e., threat to life or limb) [4], [5] and [6]. By definition, PTSD in relation to disaster trauma is limited to those physically endangered, who directly witnessed disaster trauma, or whose close associates were disaster trauma-exposed. PTSD is usually the most prevalent disaster-related psychiatric disorder and major depression is generally second in prevalence [1], [7], [8] and [9], although this diagnostic prevalence order has not been universally reported [10], [11], [12], [13] and [14]. The conditional requirement of trauma exposure for PTSD creates complexities for comparing prevalence of disaster-specific PTSD and other postdisaster disorders that are not conditionally based on trauma exposure such as major depressive disorder (MDD). This is especially true if relatively few members of a population had qualifying disaster trauma exposures, as was the case with geographically broad groups examined after the September 11, 2001 (9/11) attacks [15], [16] and [17]. Comparing PTSD and MDD prevalence in relation to specific trauma exposure thus introduces bias when few members of a sample are potential candidates for PTSD yet are all potential candidates for MDD. Comparing PTSD and MDD incidence may thus be most logically conducted with a universally trauma-exposed sample. If, however, comparisons to be made are concerned only with numbers of cases without considering exposure as part of the equation (e.g., counting the total number of people with PTSD in a circumscribed population for purposes of estimating needed resources to serve them), then mixed-exposure populations can be informative. The magnitude of the attacks and the scope of the disruption to New York City [18] and [19] uniquely introduced new considerations of trauma exposure into disaster mental health research [8], [20] and [21]. The mental health effects of this unprecedented incident extended far beyond the geographical areas of human endangerment [15], [16], [17] and [22]. A few studies assessed PTSD and depression/mood disorders in community members after the 9/11 attacks on the World Trade Center (WTC) in New York City, finding mood disorders to be more prevalent than PTSD. A structured telephone interview study by Galea et al. [15] of largely unexposed Manhattan residents 1–2 months after the attacks found the prevalence of “symptoms consistent with” the diagnosis to be 7.5% for PTSD and 9.5% for MDD. Among those who lived closer to the attack site, PTSD was more prevalent, but among those who lost friends or relatives, MDD was more prevalent. Two studies [23] and [24] examining PTSD and depression/mood disorders among survivors with “direct” exposure to 9/11 WTC trauma at approximately one year [23] or between three and four years [24] post disaster respectively found postdisaster depression/mood disorders to be more prevalent than 9/11-related PTSD. The Neria et al. [23] study used symptom screeners not providing diagnostic assessment, but the Henriksen et al. [24] study used face-to-face structured diagnostic interviews. The exposure categories in these two studies were “arbitrarily created” (p. 998) [24] either through reliance on participants’ categorization of their own exposures (e.g., “in the immediate area” of the 9/11 attack without specification of how close) [24] or based on 9/11-related experiences that would not necessarily meet PTSD trauma exposure criteria, e.g., location below 14th Street in New York City (approximately 1.7 miles minimum distance from Ground Zero) or witnessing smoke (which could be seen from miles away) after the attacks [23]. Our prior work determining that most qualifying direct exposures occurred within 0.1 mile of Ground Zero and all were within 0.75 mile [20] suggests that unknown but potentially substantial proportions of these samples lacked qualifying 9/11 trauma exposures for a DSM-IV-TR diagnosis of PTSD. Research using full diagnostic assessment and careful categorization of trauma exposure in relation to the 9/11 attacks is therefore needed to confirm impressions from other reports that postdisaster depressive disorders appear to be more prevalent than PTSD after this disaster, unlike most disaster studies. The current study examined the prevalence of 9/11-related PTSD and MDD after the 9/11 attacks among variously 9/11 trauma-exposed groups in New York City, using full diagnostic assessment methods and careful categorization of 9/11 trauma exposures based on the DSM-IV-TR definition of trauma for the diagnosis of PTSD.

The differential incidence of disaster-related PTSD and MDD after the 9/11 attacks on the WTC and considerations of the specific associations of PTSD with personal exposures and MDD with magnitude of the disaster impact and personal connectedness of community members suggest that these disorders may represent very different constructs in the aftermath of disaster. PTSD and MDD require different interventions, and estimation of the numbers of community members likely to develop these different disorders are important for the planning of mental health services after disasters. Future studies are needed to replicate and confirm the findings about the differential development of PTSD vs. MDD after different types of major disasters.