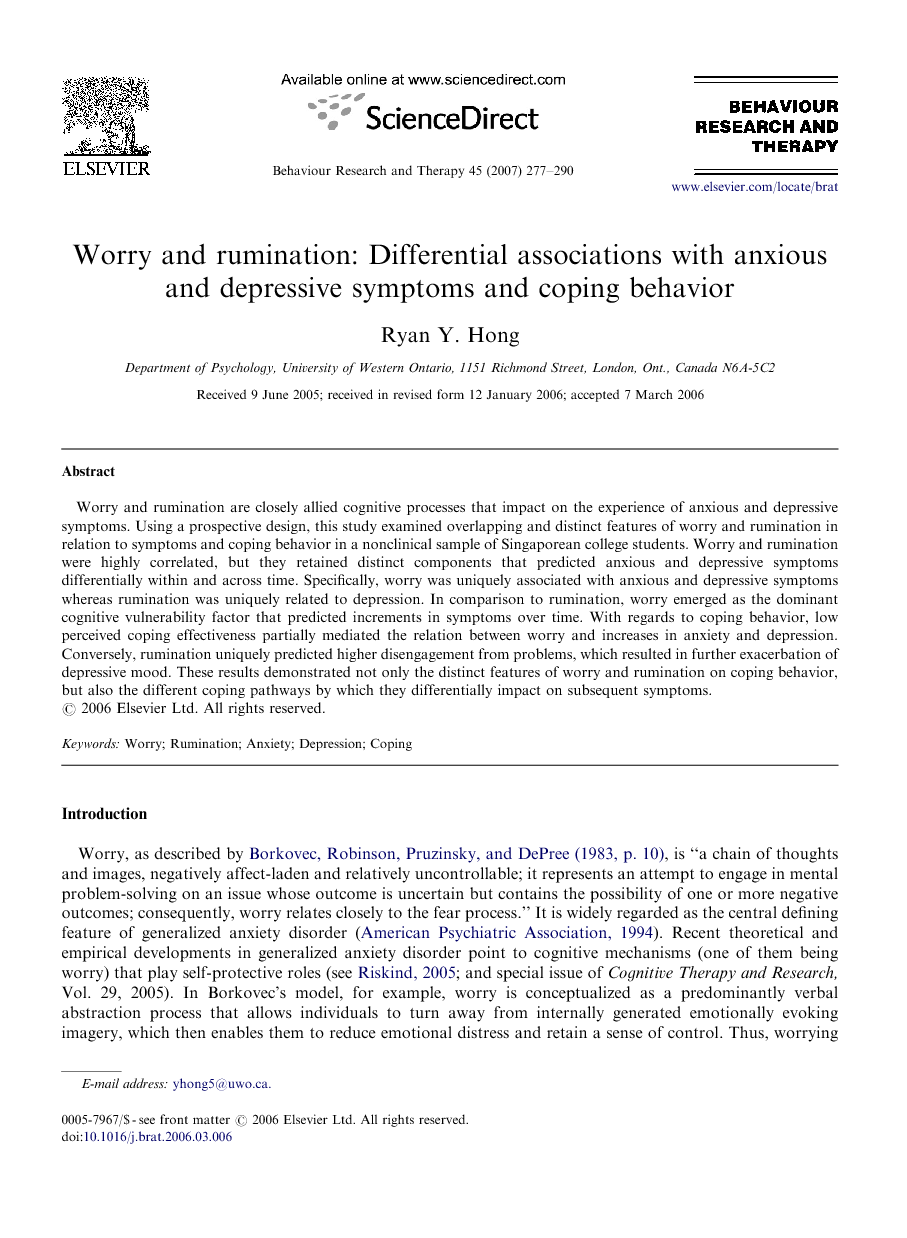 Worry and rumination are closely allied cognitive processes that impact on the experience of anxious and depressive symptoms. Using a prospective design, this study examined overlapping and distinct features of worry and rumination in relation to symptoms and coping behavior in a nonclinical sample of Singaporean college students. Worry and rumination were highly correlated, but they retained distinct components that predicted anxious and depressive symptoms differentially within and across time. Specifically, worry was uniquely associated with anxious and depressive symptoms whereas rumination was uniquely related to depression. In comparison to rumination, worry emerged as the dominant cognitive vulnerability factor that predicted increments in symptoms over time. With regards to coping behavior, low perceived coping effectiveness partially mediated the relation between worry and increases in anxiety and depression. Conversely, rumination uniquely predicted higher disengagement from problems, which resulted in further exacerbation of depressive mood. These results demonstrated not only the distinct features of worry and rumination on coping behavior, but also the different coping pathways by which they differentially impact on subsequent symptoms.

Worry, as described by Borkovec, Robinson, Pruzinsky, and DePree (1983, p. 10), is “a chain of thoughts and images, negatively affect-laden and relatively uncontrollable; it represents an attempt to engage in mental problem-solving on an issue whose outcome is uncertain but contains the possibility of one or more negative outcomes; consequently, worry relates closely to the fear process.” It is widely regarded as the central defining feature of generalized anxiety disorder (American Psychiatric Association, 1994). Recent theoretical and empirical developments in generalized anxiety disorder point to cognitive mechanisms (one of them being worry) that play self-protective roles (see Riskind, 2005; and special issue of Cognitive Therapy and Research, Vol. 29, 2005). In Borkovec's model, for example, worry is conceptualized as a predominantly verbal abstraction process that allows individuals to turn away from internally generated emotionally evoking imagery, which then enables them to reduce emotional distress and retain a sense of control. Thus, worrying serves as an avoidance response that interferes with functional emotional processing and in turn prevents the extinction of fear ( Borkovec, 1994; Borkovec, Ray, & Stoeber, 1998). Nolen-Hoeksema (1998, p. 239) defines rumination as “behaviors and thoughts that passively focus one's attention to one's depressive symptoms and on the implications of these symptoms.” Rumination has been extensively studied in depression research (Nolen-Hoeksema (1991) and Nolen-Hoeksema (1998)), emerging as one of the important vulnerability factors that predicts the onset and maintenance of depressive symptoms (Nolen-Hoeksema, 2000; Nolen-Hoeksema, Morrow, & Fredrickson, 1993). By focusing on one's depressed mood and its implications on oneself (e.g., how sad, unmotivated, and lethargic one feels), attention is shifted away from potentially adaptive responses to negative mood (e.g., engaging in complex problem-solving), which may subsequently lead to the maintenance of depressed mood (Nolen-Hoeksema, 1991). Furthermore, rumination can also prolong depressive symptoms by enhancing maladaptive thinking, such as endorsing distorted interpretations of events and expecting negative future outcomes (Lyubomirsky & Nolen-Hoeksema, 1995; Lyubomirsky, Tucker, Caldwell, & Berg, 1999; Pyszczynski, Holt, & Greenberg, 1987).