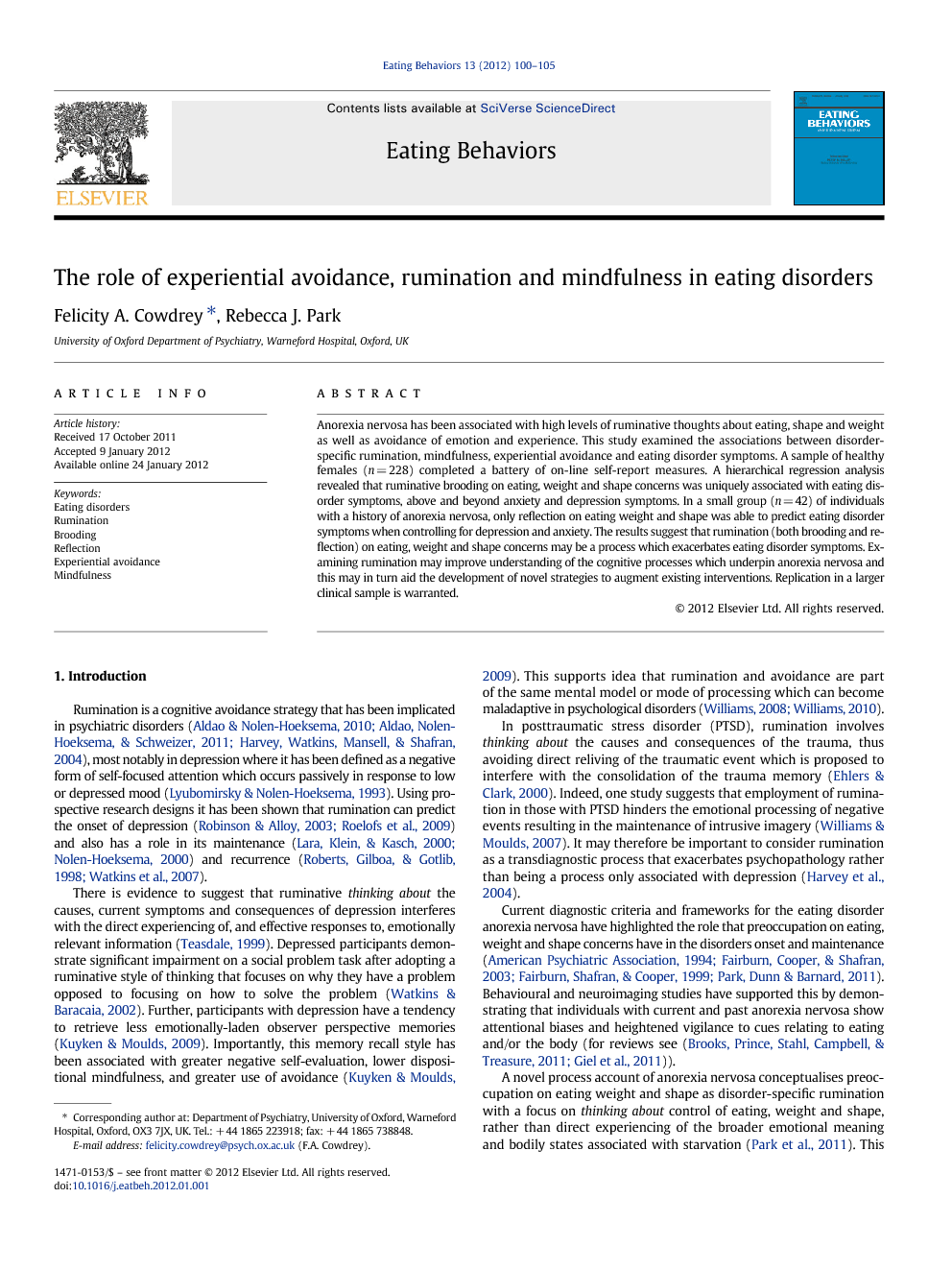 Anorexia nervosa has been associated with high levels of ruminative thoughts about eating, shape and weight as well as avoidance of emotion and experience. This study examined the associations between disorder-specific rumination, mindfulness, experiential avoidance and eating disorder symptoms. A sample of healthy females (n = 228) completed a battery of on-line self-report measures. A hierarchical regression analysis revealed that ruminative brooding on eating, weight and shape concerns was uniquely associated with eating disorder symptoms, above and beyond anxiety and depression symptoms. In a small group (n = 42) of individuals with a history of anorexia nervosa, only reflection on eating weight and shape was able to predict eating disorder symptoms when controlling for depression and anxiety. The results suggest that rumination (both brooding and reflection) on eating, weight and shape concerns may be a process which exacerbates eating disorder symptoms. Examining rumination may improve understanding of the cognitive processes which underpin anorexia nervosa and this may in turn aid the development of novel strategies to augment existing interventions. Replication in a larger clinical sample is warranted.

Rumination is a cognitive avoidance strategy that has been implicated in psychiatric disorders (Aldao and Nolen-Hoeksema, 2010, Aldao et al., 2011 and Harvey et al., 2004), most notably in depression where it has been defined as a negative form of self-focused attention which occurs passively in response to low or depressed mood (Lyubomirsky & Nolen-Hoeksema, 1993). Using prospective research designs it has been shown that rumination can predict the onset of depression (Robinson and Alloy, 2003 and Roelofs et al., 2009) and also has a role in its maintenance (Lara et al., 2000 and Nolen-Hoeksema, 2000) and recurrence (Roberts et al., 1998 and Watkins et al., 2007). There is evidence to suggest that ruminative thinking about the causes, current symptoms and consequences of depression interferes with the direct experiencing of, and effective responses to, emotionally relevant information ( Teasdale, 1999). Depressed participants demonstrate significant impairment on a social problem task after adopting a ruminative style of thinking that focuses on why they have a problem opposed to focusing on how to solve the problem ( Watkins & Baracaia, 2002). Further, participants with depression have a tendency to retrieve less emotionally-laden observer perspective memories ( Kuyken & Moulds, 2009). Importantly, this memory recall style has been associated with greater negative self-evaluation, lower dispositional mindfulness, and greater use of avoidance ( Kuyken & Moulds, 2009). This supports idea that rumination and avoidance are part of the same mental model or mode of processing which can become maladaptive in psychological disorders ( Williams, 2008 and Williams, 2010). In posttraumatic stress disorder (PTSD), rumination involves thinking about the causes and consequences of the trauma, thus avoiding direct reliving of the traumatic event which is proposed to interfere with the consolidation of the trauma memory ( Ehlers & Clark, 2000). Indeed, one study suggests that employment of rumination in those with PTSD hinders the emotional processing of negative events resulting in the maintenance of intrusive imagery ( Williams & Moulds, 2007). It may therefore be important to consider rumination as a transdiagnostic process that exacerbates psychopathology rather than being a process only associated with depression ( Harvey et al., 2004). Current diagnostic criteria and frameworks for the eating disorder anorexia nervosa have highlighted the role that preoccupation on eating, weight and shape concerns have in the disorders onset and maintenance (American Psychiatric Association, 1994, Fairburn et al., 2003, Fairburn et al., 1999 and Park et al., in press-b). Behavioural and neuroimaging studies have supported this by demonstrating that individuals with current and past anorexia nervosa show attentional biases and heightened vigilance to cues relating to eating and/or the body (for reviews see (Brooks et al., 2011 and Giel et al., 2011)). A novel process account of anorexia nervosa conceptualises preoccupation on eating weight and shape as disorder-specific rumination with a focus on thinking about control of eating, weight and shape, rather than direct experiencing of the broader emotional meaning and bodily states associated with starvation ( Park et al., 2011). This account suggests that disorder-specific rumination may play a role in the maintenance of anorexia nervosa as exclusive mental focus on food and eating may be associated with emotions becoming less salient. As individuals with anorexia nervosa tend to be avoidant of experience and have difficulty tolerating emotions ( Hambrook et al., 2011), the effect of rumination may be experienced positively and thus potentially reinforce eating disorder behaviours ( Schmidt and Treasure, 2006 and Serpell et al., 1999). In support of the idea that in anorexia nervosa rumination removes individuals from starvation-related body cues as proposed by Park et al., in press-a and Park et al., in press-b, it has been shown that individuals with anorexia nervosa show decreased interoceptive awareness and sensitivity (Fassino et al., 2004 and Pollatos et al., 2008). More generally, avoidance of experience has been shown to contribute to disordered eating patterns (Lavender and Anderson, 2010, Lavender et al., 2011 and Rawal et al., 2010) and influence ED outcome at follow-up (Herpertz-Dahlmann et al., 2001 and Smith et al., 1993). Previous work by our group has shown that participants with a history of anorexia nervosa had significantly higher scores on a measure of rumination on eating, weight and shape, compared to healthy control participants (Cowdrey & Park, 2011) and that rumination on eating, weight and shape significantly predicted eating disorder symptoms after controlling for depression and anxiety. Furthermore, in an experimental study with a clinical and an ‘at risk’ samples it was found that inducing a ruminative ‘thinking about’ mode of processing before an imaginary meal procedure resulted in a greater stress response and attempt to neutralise compared to when a sensory based, mindful mode of processing was adopted ( Rawal, Williams, & Park, 2011). This supports that notion that the way in which information about the self is processed can influence eating disorder cognitions and behaviour. The adaptive counterpart of rumination and experiential avoidance is mindfulness, defined as purposefully and non-judgementally attending to the present moment (Bishop et al., 2004). Park, Dunn and Barnard suggest that this alternative mode of attending to information relating to the self and the body may be fundamental to recovery from anorexia nervosa (Park et al., 2011). Previous studies show that there is an inverse relationship between mindfulness and eating disorder-related cognitions (Lavender et al., 2009 and Lavender et al., 2011) and also that mindfulness may mediate the link between eating disorder cognitions and psychological distress (Masuda & Wendell, 2010). Mindfulness practices have also been incorporated to ‘third generation’ behaviour therapies for eating disorders, such as Emotion Acceptance Behaviour Therapy ( Wildes, Ringham, & Marcus, 2010), Dialectical Behaviour Therapy ( Palmer et al., 2003), Mindful Movement classes ( Rawal, Enayati, Williams, & Park, 2009) and Mindfulness Based Eating Awareness Training ( Kristeller & Wolever, 2010), which support the potential use of such strategies. This study aimed to investigate, initially in a healthy adult sample, the specific hypotheses of Park et al., in press-a and Park et al., in press-b that rumination on eating, weight and shape, experiential avoidance and low levels of mindfulness are associated with eating disorder symptoms. To our knowledge this is the first study to investigate the association between these cognitive–affective processes. It is hoped that the findings will aid the development of interventions targeting specific processes in anorexia nervosa.