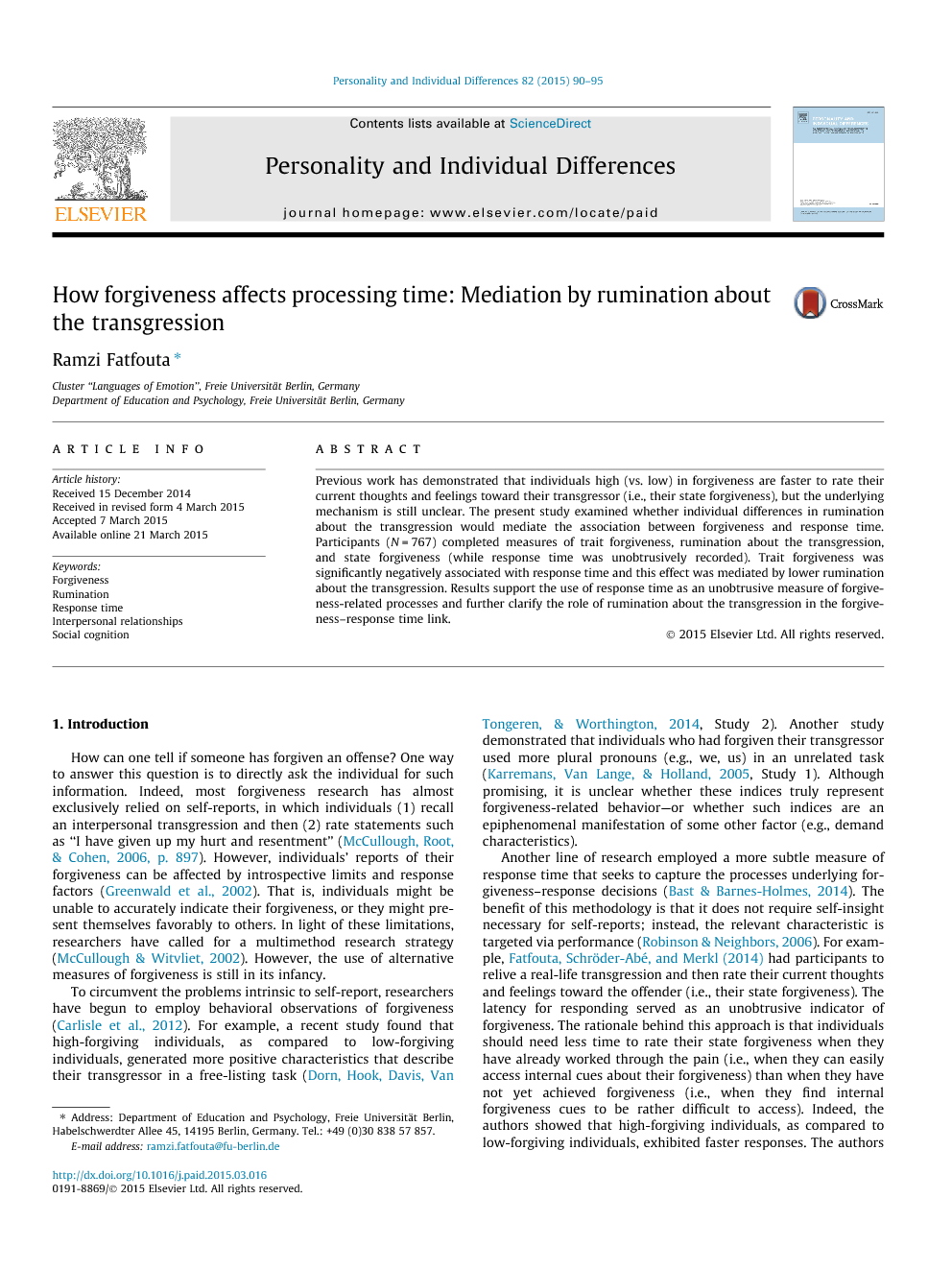 How can one tell if someone has forgiven an offense? One way to answer this question is to directly ask the individual for such information. Indeed, most forgiveness research has almost exclusively relied on self-reports, in which individuals (1) recall an interpersonal transgression and then (2) rate statements such as “I have given up my hurt and resentment” (McCullough, Root, & Cohen, 2006, p. 897). However, individuals’ reports of their forgiveness can be affected by introspective limits and response factors (Greenwald et al., 2002). That is, individuals might be unable to accurately indicate their forgiveness, or they might present themselves favorably to others. In light of these limitations, researchers have called for a multimethod research strategy (McCullough & Witvliet, 2002). However, the use of alternative measures of forgiveness is still in its infancy. To circumvent the problems intrinsic to self-report, researchers have begun to employ behavioral observations of forgiveness (Carlisle et al., 2012). For example, a recent study found that high-forgiving individuals, as compared to low-forgiving individuals, generated more positive characteristics that describe their transgressor in a free-listing task (Dorn, Hook, Davis, Van Tongeren, & Worthington, 2014, Study 2). Another study demonstrated that individuals who had forgiven their transgressor used more plural pronouns (e.g., we, us) in an unrelated task (Karremans, Van Lange, & Holland, 2005, Study 1). Although promising, it is unclear whether these indices truly represent forgiveness-related behavior—or whether such indices are an epiphenomenal manifestation of some other factor (e.g., demand characteristics). Another line of research employed a more subtle measure of response time that seeks to capture the processes underlying forgiveness–response decisions (Bast & Barnes-Holmes, 2014). The benefit of this methodology is that it does not require self-insight necessary for self-reports; instead, the relevant characteristic is targeted via performance (Robinson & Neighbors, 2006). For example, Fatfouta, Schröder-Abé, and Merkl (2014) had participants to relive a real-life transgression and then rate their current thoughts and feelings toward the offender (i.e., their state forgiveness). The latency for responding served as an unobtrusive indicator of forgiveness. The rationale behind this approach is that individuals should need less time to rate their state forgiveness when they have already worked through the pain (i.e., when they can easily access internal cues about their forgiveness) than when they have not yet achieved forgiveness (i.e., when they find internal forgiveness cues to be rather difficult to access). Indeed, the authors showed that high-forgiving individuals, as compared to low-forgiving individuals, exhibited faster responses. The authors further found that response time was unrelated to socially desirable responding. At present, however, there is no evidence as to how forgiveness affects response time. Thus, in the present research, the aim was to replicate and extend these initial findings by exploring the underlying mechanism that mediates this association. Although several socio-cognitive variables have been shown to impact forgiveness, a critical role has been attributed to rumination (Ysseldyk, Matheson, & Anisman, 2007). Rumination is characterized by a “passive and repetitive focus on the negative and damaging features of a stressful transaction” (Skinner, Edge, Altman, & Sherwood, 2003, p. 242). Cross-sectional studies have demonstrated that forgiveness is negatively related to rumination (Berry et al., 2001 and Thompson et al., 2005). Specifically, individuals who report lower levels of forgiveness ruminate more after an interpersonal transgression (Kachadourian, Fincham, & Davila, 2005). These findings are corroborated by longitudinal data, demonstrating that changes in forgiveness are negatively correlated with changes in rumination (McCullough et al., 2001 and McCullough et al., 2007). By mulling an aversive event such as an interpersonal transgression over in their minds, individuals often attempt to understand why it upsets them ( Watkins & Baracaia, 2001). Such a thought process involves evaluative and analytical questions (e.g., “Why did he/she hurt me?”) that revolve around the (negative) causes and consequences of that event ( Watkins, 2008 and Watkins and Baracaia, 2002). Furthermore, when individuals ruminate, they tend to process information more thoroughly, carefully, and slowly (see Andrews & Thomson, 2009). Hence, when prompted to (1) call to mind a transgression and then (2) rate their state of forgiveness, individuals who ponder on their transgression more persistently than others do, should require more time to arrive at a response (and, hence, exhibit longer latencies). This is consistent with evidence that a deliberative mode of information processing takes time, as indexed by a slowing in response time ( Baxter and Hinson, 2001 and Fazio, 1990a). To the extent that response times represent “overt behavioral indices of a covert mental process” (Holden, Woermke, & Fekken, 1993, p. 2), they may provide an appealing approach to the study of forgiveness. Moving beyond previous work, the present research sought to scrutinize the psychological mechanism underlying the association between forgiveness and the time with which individuals generated responses to state forgiveness ratings following the transgression recall. If individuals high (vs. low) in forgiveness are faster to rate their state forgiveness, it is perhaps their reduced amount of ruminative tendencies that explains this association. To test this hypothesis, a mediation model is proposed in which individuals high (vs. low) in forgiveness would display lower ruminative tendencies and this, in turn, might mediate the association between forgiveness and response time.