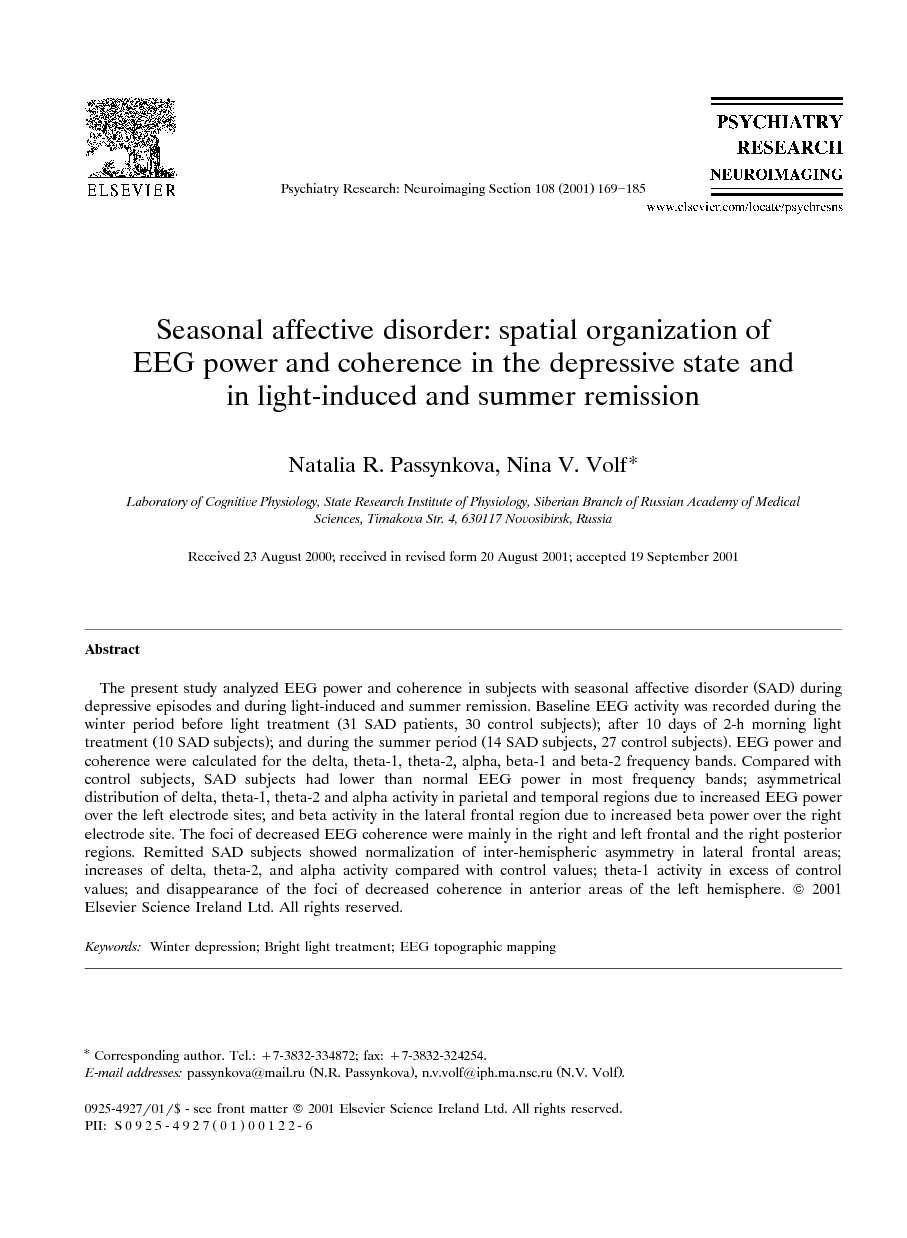 The present study analyzed EEG power and coherence in subjects with seasonal affective disorder (SAD) during depressive episodes and during light-induced and summer remission. Baseline EEG activity was recorded during the winter period before light treatment (31 SAD patients, 30 control subjects); after 10 days of 2-h morning light treatment (10 SAD subjects); and during the summer period (14 SAD subjects, 27 control subjects). EEG power and coherence were calculated for the delta, theta-1, theta-2, alpha, beta-1 and beta-2 frequency bands. Compared with control subjects, SAD subjects had lower than normal EEG power in most frequency bands; asymmetrical distribution of delta, theta-1, theta-2 and alpha activity in parietal and temporal regions due to increased EEG power over the left electrode sites; and beta activity in the lateral frontal region due to increased beta power over the right electrode site. The foci of decreased EEG coherence were mainly in the right and left frontal and the right posterior regions. Remitted SAD subjects showed normalization of inter-hemispheric asymmetry in lateral frontal areas; increases of delta, theta-2, and alpha activity compared with control values; theta-1 activity in excess of control values; and disappearance of the foci of decreased coherence in anterior areas of the left hemisphere.

The relationship of depressed states to cerebral hemispheric activity has long been explored. A number of studies have demonstrated that depressive conditions are associated with functional hemispheric asymmetry in the frontal area or with reciprocal changes of the normal pattern of asymmetry in frontal and parietal brain areas. (Flor-Henry, 1976, Flor-Henry, 1979, Uytdenhoef et al., 1983, Post et al., 1987, Tucker and Frederick, 1987, Davidson and Tomarken, 1989, Heller, 1993, Heller et al., 1995 and Bruder et al., 1997). Some studies have shown that hemispheric asymmetry persists even after remission of the depressive state (Henriques and Davidson, 1990). Other studies, however, have shown that both the nature of the depressed state and the severity of symptoms significantly affect the brain activity patterns observed (Perris and Monakhov, 1979, Tucker and Frederick, 1987, Baxter et al., 1989, Bench et al., 1993, Clementz et al., 1994 and Bruder et al., 1997). The current delineation of seasonal affective disorder (SAD) as a medically distinct form of depression with specific clinical and therapeutic implications emerged from work performed over the last 20 years. To the extent that SAD is associated with so-called atypical symptoms of depression (Rosenthal et al., 1984) and treatment with bright light results in a rapid improvement of depressed mood (Rosenthal et al., 1985 and Partonen, 1994), it is reasonable to suggest that different patterns of brain laterality may be characterized in depressed vs. remitted states in SAD. Our previous studies, which used behavioral measures, have demonstrated that SAD is associated with reciprocal changes in frontal and parieto-temporal patterns of hemispheric activity (Volf et al., 1993 and Volf et al., 1997). It has been shown that relatively high levels of right frontal activity are normalized by bright light, whereas relatively low levels of right parieto-temporal activity in SAD are not state-related. Although behavioral asymmetry measures can provide reliable and valid data concerning cerebral laterality, they do not in themselves provide sufficient information about the neurophysiological basis of hemispheric organization in depressed and remitted states. Electroencephalographic (EEG) techniques provide more direct measures of locally confined and intra-hemispheric differentiated brain activity. To date, only a limited number of EEG studies have been conduced in subjects with SAD. Women with SAD revealed a pattern of frontal asymmetry with a relative increase of left-frontal alpha activity both when depressed and following light-induced remission (Allen et al., 1993). In contrast, depressed SAD subjects before light therapy demonstrated patterns of hemispheric asymmetry with greater power on the left than the right in the delta, theta, and beta bands, especially in the posterior region (Teicher et al., 1996). Light therapy reversed the posterior asymmetry in the delta and beta bands but had no effect on the theta band. A few studies have been performed to determine regional metabolic or perfusion changes in SAD (Cohen et al., 1992, Murphy et al., 1993 and Matthew et al., 1996), but the findings are inconsistent. Cohen et al. (1992) reported that global metabolic rates were lower in SAD patients than in normal control subjects both before and after light therapy, especially in the superior medial frontal cortex. There were significant differences in the occipital cortex between control subjects and SAD patients following exposure to light, whereas there were no significant differences in these regions before light therapy. A later study, which analyzed cerebral blood flow (CBF) in SAD patients (Murphy et al., 1993), did not replicate the previous result. Before exposure to light, there were no significant differences between patients and control subjects in global, regional or hemispheric CBF. After light therapy, both SAD patients and control subjects showed significant decreases in CBF. In another study, in contrast, Matthew et al. (1996) observed that improvement in depressive symptoms was associated with increased regional CBF in frontal, cingulate and thalamic regions. It is conceivable that the inconsistencies in both EEG and metabolic or CBF studies reflect different subgroups of depressive patients: e.g. diagnostic subtype (unipolar/bipolar depression), gender of subjects, method of registration of brain metabolic or CBF activity, number of EEG electrodes, and EEG reference sites. Patterns of regional brain activity in SAD have not yet been thoroughly explored. More studies are required to shed light on the patterns of regional brain activity in depressed vs. remitted SAD patients. Several recent studies have explored patterns of functional connectivity among brain regions in depressed patients (Yamada et al., 1995 and Knott et al., 2001). Until now, however, information about inter-hemispheric and intra-hemispheric functional interactions in SAD has been lacking. The coherence of two EEG signals recorded from spatially separated brain regions is an indicator of functional interaction between these regions. EEG-coherence measures might provide a useful means of discriminating between SAD subjects during depressive episodes and during light-induced and summer remission and control subjects. To our knowledge, no systematic EEG power and coherence study of SAD subjects in different emotional states has been published. Thus, the present study was designed to analyze the spatial organization of EEG power and coherence of SAD subjects during depressive episodes and following light-induced and summer remission. We addressed several issues: First, we explored whether state-dependent lateral differences in frontal regions and state-independent lateral differences in caudal regions characterized SAD subjects compared with control subjects. Second, we examined whether depressed and remitted states in SAD were associated with frequency-dependent regional EEG differences. Third, we investigated the topography of coherence differences between SAD subjects in different emotional states and control subjects.