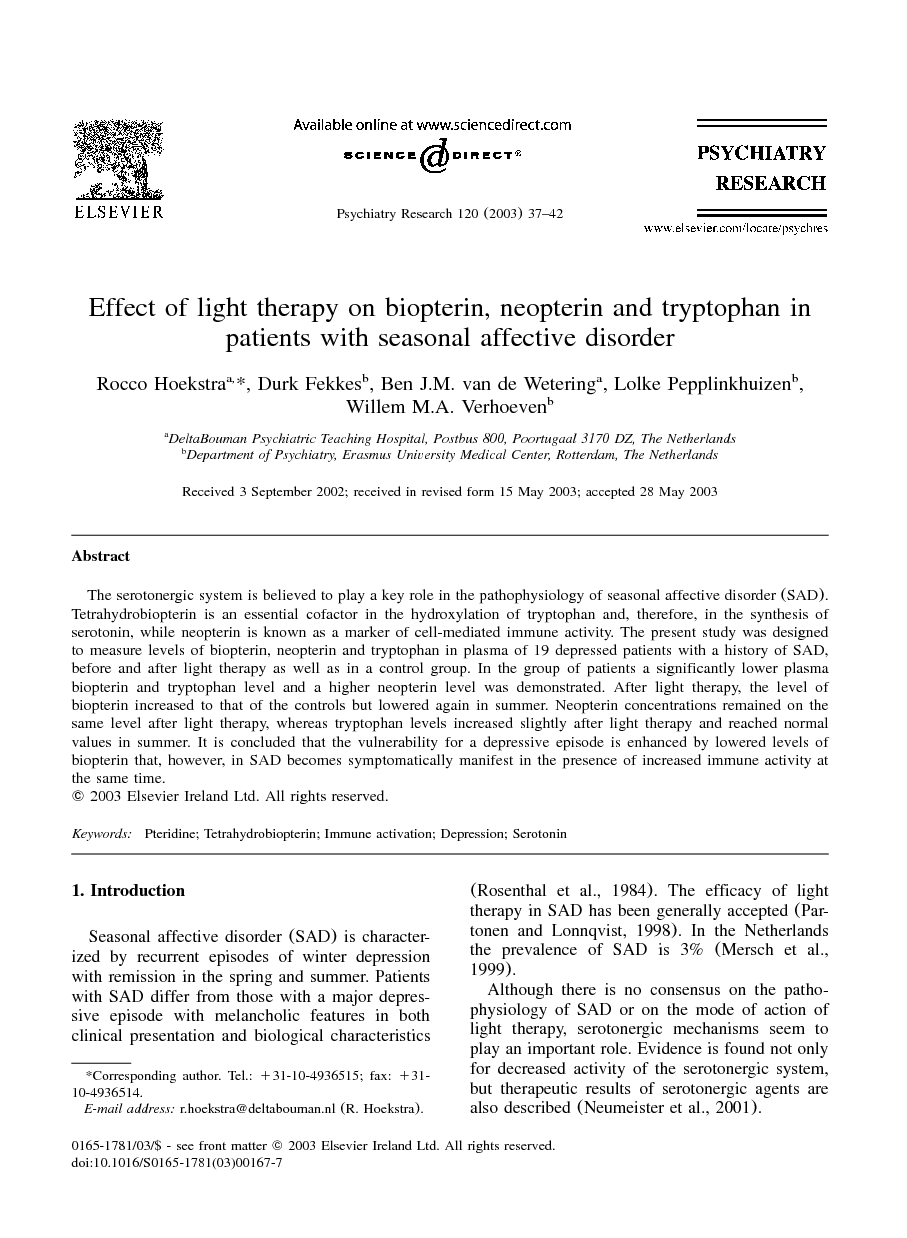 The serotonergic system is believed to play a key role in the pathophysiology of seasonal affective disorder (SAD). Tetrahydrobiopterin is an essential cofactor in the hydroxylation of tryptophan and, therefore, in the synthesis of serotonin, while neopterin is known as a marker of cell-mediated immune activity. The present study was designed to measure levels of biopterin, neopterin and tryptophan in plasma of 19 depressed patients with a history of SAD, before and after light therapy as well as in a control group. In the group of patients a significantly lower plasma biopterin and tryptophan level and a higher neopterin level was demonstrated. After light therapy, the level of biopterin increased to that of the controls but lowered again in summer. Neopterin concentrations remained on the same level after light therapy, whereas tryptophan levels increased slightly after light therapy and reached normal values in summer. It is concluded that the vulnerability for a depressive episode is enhanced by lowered levels of biopterin that, however, in SAD becomes symptomatically manifest in the presence of increased immune activity at the same time.

Seasonal affective disorder (SAD) is characterized by recurrent episodes of winter depression with remission in the spring and summer. Patients with SAD differ from those with a major depressive episode with melancholic features in both clinical presentation and biological characteristics (Rosenthal et al., 1984). The efficacy of light therapy in SAD has been generally accepted (Partonen and Lonnqvist, 1998). In the Netherlands the prevalence of SAD is 3% (Mersch et al., 1999). Although there is no consensus on the pathophysiology of SAD or on the mode of action of light therapy, serotonergic mechanisms seem to play an important role. Evidence is found not only for decreased activity of the serotonergic system, but therapeutic results of serotonergic agents are also described (Neumeister et al., 2001). Pteridines are compounds that occur in human as skin and eye pigments and act as multifunctional cofactors such as folic acid and tetrahydrobiopterin (BH4) (Auerbach and Nar, 1997). BH4 is the essential cofactor for the enzyme tryptophan hydroxylase. This enzyme hydroxylates tryptophan to 5-hydroxytryptophan, which is the rate-limiting step in the biosynthesis of serotonin. In the pineal gland serotonin is converted to melatonin (Levine, 1988). In addition, BH4 is an essential cofactor in the hydroxylation of phenylalanine and tyrosine from which the catecholamines are synthesized. Furthermore, this cofactor influences the release mechanism in nerve terminals of these neurotransmitters (Wolf et al., 1991). BH4 is synthesized de novo from guanosine triphosphate (GTP) via the intermediate dihydroneopterin triphosphate (H2NTP). The latter substance may also be converted to neopterin, which is excreted in urine. The oxidative products of BH4 are dihydrobiopterin and biopterin, which are also excreted in urine (Levine, 1988). Cytokine-mediated T-lymphocyte activation results in increased neopterin synthesis and its release from macrophages. Therefore, neopterin can be used as a marker for cell-mediated immune activation (Maes et al., 1994 and Auerbach and Nar, 1997), and it has been suggested subsequently that alterations in cell-mediated and humoral immune function may play a role in the pathophysiology of depressive disorders (Maes et al., 1994). Support for this idea stems from the observation of altered immunologic parameters, such as neopterin, in depressed patients with SAD after monoamine depletion (Stastny et al., 2003). Biopterin has been found to be decreased in depression (Abou-Saleh et al., 1995, Anderson et al., 1992, Coppen et al., 1989 and Hoekstra et al., 2001). This could be explained by assuming that the intermediate H2NTP is mainly converted to the immunologic marker neopterin, more than to the cofactor BH4, resulting in less BH4-dependent hydroxylation of tryptophan or tyrosine and consequently in decreased synthesis of serotonin, dopamine and (nor) epinephrine. Since the pineal gland contains relatively high concentrations of BH4, less activity of this substance may in turn result in a decrease of melatonin levels (Levine, 1988). The present study was designed to measure plasma levels of biopterin and neopterin, and to investigate their relationship to plasma tryptophan in depressed patients with SAD before and after light therapy. Given the crucial role of biopterin in the synthesis of serotonin and the diminished serotonergic activity in SAD, it was postulated that levels of biopterin and tryptophan, the precursor of serotonin, would be lower in depressed patients with SAD with an increase to normal values after light therapy. Since depression in general, and particularly SAD, is associated with immune activation, an increase in neopterin level before light therapy in depressed patients as compared to healthy controls, with normalization after light therapy, was hypothesized.