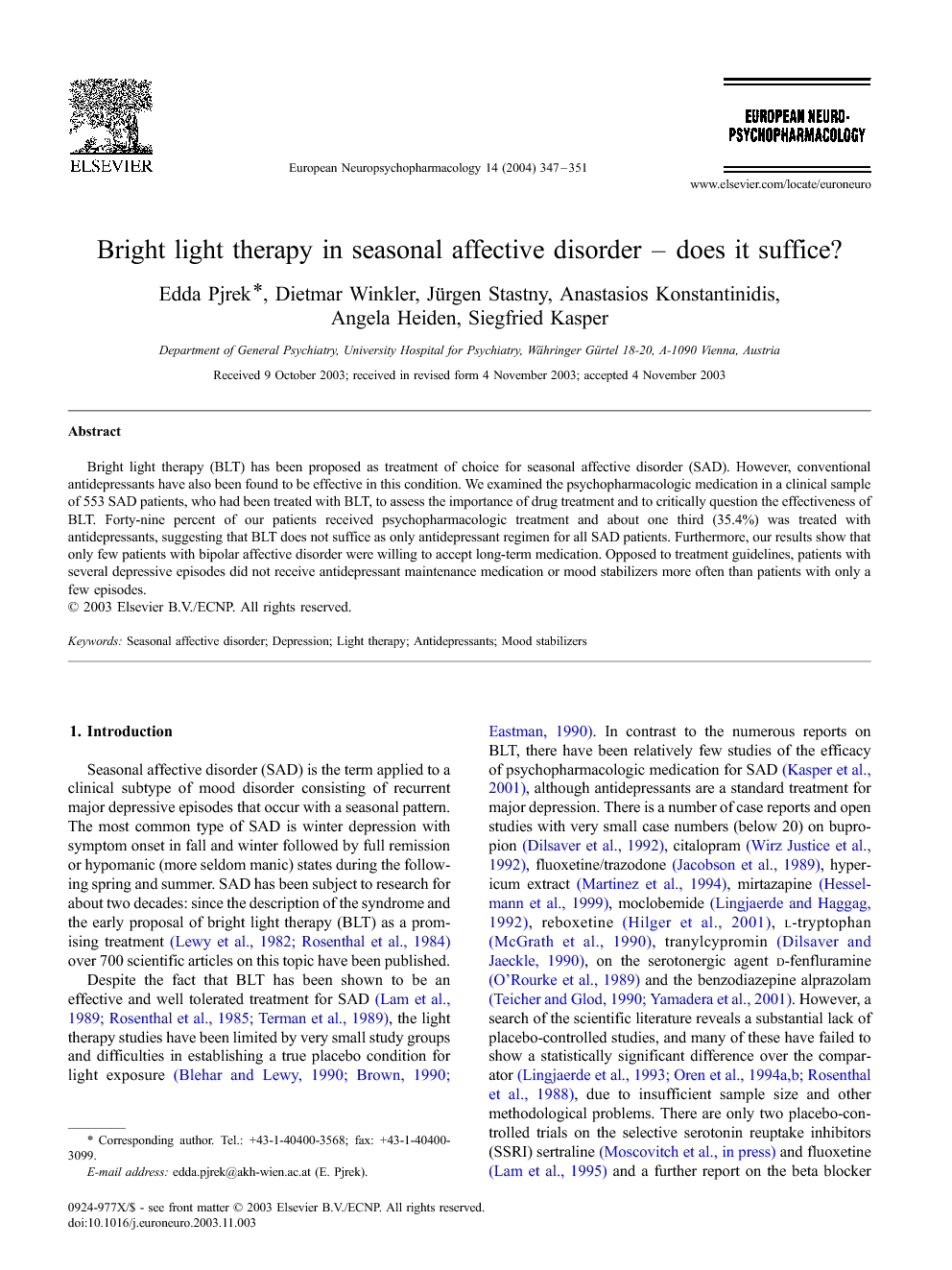 Bright light therapy (BLT) has been proposed as treatment of choice for seasonal affective disorder (SAD). However, conventional antidepressants have also been found to be effective in this condition. We examined the psychopharmacologic medication in a clinical sample of 553 SAD patients, who had been treated with BLT, to assess the importance of drug treatment and to critically question the effectiveness of BLT. Forty-nine percent of our patients received psychopharmacologic treatment and about one third (35.4%) was treated with antidepressants, suggesting that BLT does not suffice as only antidepressant regimen for all SAD patients. Furthermore, our results show that only few patients with bipolar affective disorder were willing to accept long-term medication. Opposed to treatment guidelines, patients with several depressive episodes did not receive antidepressant maintenance medication or mood stabilizers more often than patients with only a few episodes.

Seasonal affective disorder (SAD) is the term applied to a clinical subtype of mood disorder consisting of recurrent major depressive episodes that occur with a seasonal pattern. The most common type of SAD is winter depression with symptom onset in fall and winter followed by full remission or hypomanic (more seldom manic) states during the following spring and summer. SAD has been subject to research for about two decades: since the description of the syndrome and the early proposal of bright light therapy (BLT) as a promising treatment Lewy et al., 1982 and Rosenthal et al., 1984 over 700 scientific articles on this topic have been published. Despite the fact that BLT has been shown to be an effective and well tolerated treatment for SAD Lam et al., 1989, Rosenthal et al., 1985 and Terman et al., 1989, the light therapy studies have been limited by very small study groups and difficulties in establishing a true placebo condition for light exposure Blehar and Lewy, 1990, Brown, 1990 and Eastman, 1990. In contrast to the numerous reports on BLT, there have been relatively few studies of the efficacy of psychopharmacologic medication for SAD (Kasper et al., 2001), although antidepressants are a standard treatment for major depression. There is a number of case reports and open studies with very small case numbers (below 20) on bupropion (Dilsaver et al., 1992), citalopram (Wirz Justice et al., 1992), fluoxetine/trazodone (Jacobson et al., 1989), hypericum extract (Martinez et al., 1994), mirtazapine (Hesselmann et al., 1999), moclobemide (Lingjaerde and Haggag, 1992), reboxetine (Hilger et al., 2001), l-tryptophan (McGrath et al., 1990), tranylcypromin (Dilsaver and Jaeckle, 1990), on the serotonergic agent d-fenfluramine (O'Rourke et al., 1989) and the benzodiazepine alprazolam Teicher and Glod, 1990 and Yamadera et al., 2001. However, a search of the scientific literature reveals a substantial lack of placebo-controlled studies, and many of these have failed to show a statistically significant difference over the comparator Lingjaerde et al., 1993, Oren et al., 1994a, Oren et al., 1994b and Rosenthal et al., 1988, due to insufficient sample size and other methodological problems. There are only two placebo-controlled trials on the selective serotonin reuptake inhibitors (SSRI) sertraline (Moscovitch et al., in press) and fluoxetine (Lam et al., 1995) and a further report on the beta blocker propranolol (Schlager, 1994) that have been able to show the superiority of the study drug under consideration. Since there is a considerable proportion of treatment non-responders in all light therapy trials and an apparent lack of methodically high-ranking antidepressant trials in SAD, we raised the question, how SAD patients had been treated in a clinical population in the last decade, how many of them had received BLT as monotherapy, and how non-responders to BLT had been treated in everyday practice. Thus, the aim of this study was to critically address the usefulness of BLT in a large clinical sample and to investigate the importance of psychopharmacological treatment in SAD.