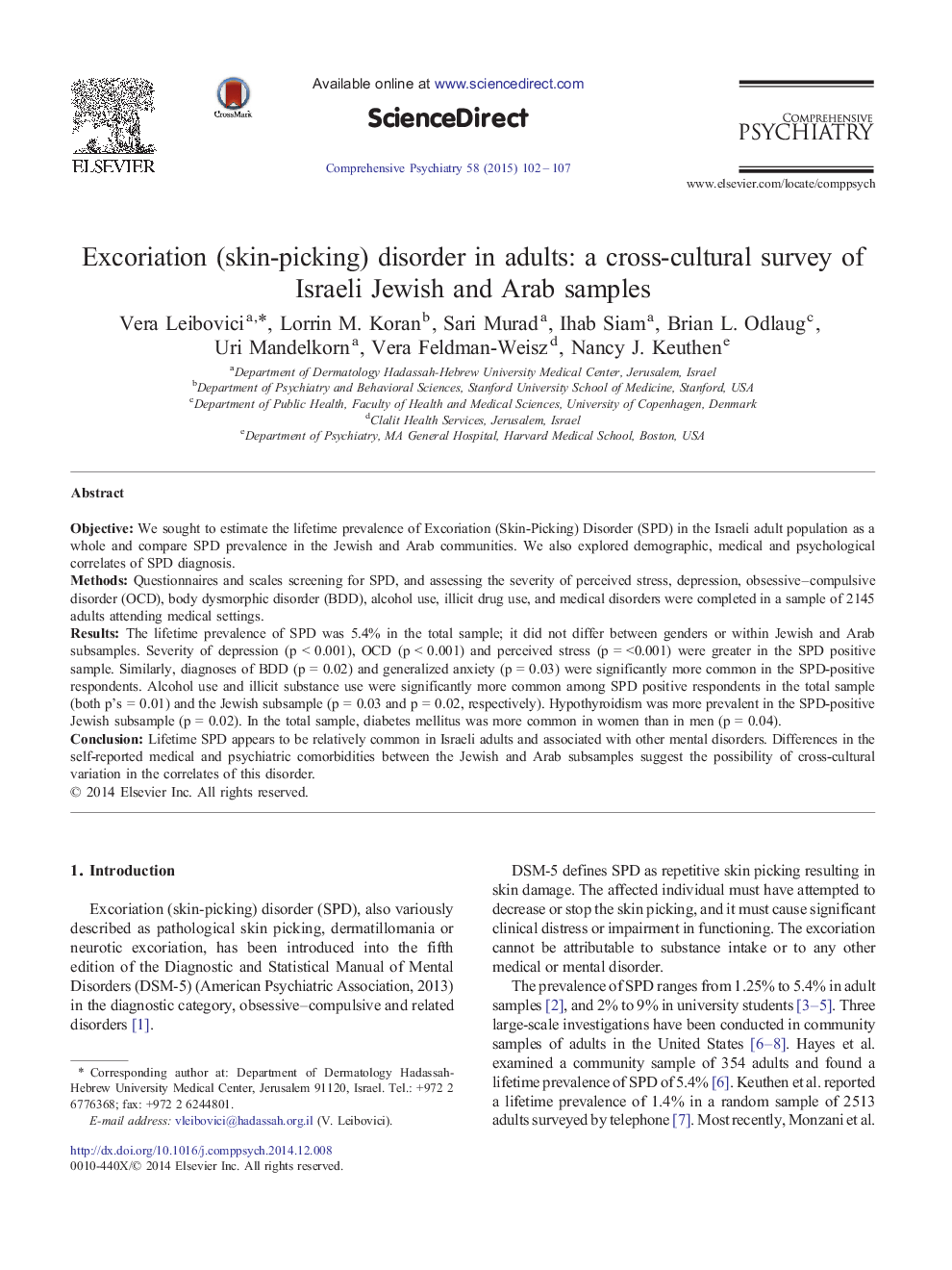 Objective We sought to estimate the lifetime prevalence of Excoriation (Skin-Picking) Disorder (SPD) in the Israeli adult population as a whole and compare SPD prevalence in the Jewish and Arab communities. We also explored demographic, medical and psychological correlates of SPD diagnosis. Methods Questionnaires and scales screening for SPD, and assessing the severity of perceived stress, depression, obsessive–compulsive disorder (OCD), body dysmorphic disorder (BDD), alcohol use, illicit drug use, and medical disorders were completed in a sample of 2145 adults attending medical settings. Results The lifetime prevalence of SPD was 5.4% in the total sample; it did not differ between genders or within Jewish and Arab subsamples. Severity of depression (p < 0.001), OCD (p < 0.001) and perceived stress (p = <0.001) were greater in the SPD positive sample. Similarly, diagnoses of BDD (p = 0.02) and generalized anxiety (p = 0.03) were significantly more common in the SPD-positive respondents. Alcohol use and illicit substance use were significantly more common among SPD positive respondents in the total sample (both p's = 0.01) and the Jewish subsample (p = 0.03 and p = 0.02, respectively). Hypothyroidism was more prevalent in the SPD-positive Jewish subsample (p = 0.02). In the total sample, diabetes mellitus was more common in women than in men (p = 0.04). Conclusion Lifetime SPD appears to be relatively common in Israeli adults and associated with other mental disorders. Differences in the self-reported medical and psychiatric comorbidities between the Jewish and Arab subsamples suggest the possibility of cross-cultural variation in the correlates of this disorder.

Excoriation (skin-picking) disorder (SPD), also variously described as pathological skin picking, dermatillomania or neurotic excoriation, has been introduced into the fifth edition of the Diagnostic and Statistical Manual of Mental Disorders (DSM-5) (American Psychiatric Association, 2013) in the diagnostic category, obsessive–compulsive and related disorders [1]. DSM-5 defines SPD as repetitive skin picking resulting in skin damage. The affected individual must have attempted to decrease or stop the skin picking, and it must cause significant clinical distress or impairment in functioning. The excoriation cannot be attributable to substance intake or to any other medical or mental disorder. The prevalence of SPD ranges from 1.25% to 5.4% in adult samples [2], and 2% to 9% in university students [3], [4] and [5]. Three large-scale investigations have been conducted in community samples of adults in the United States [6], [7] and [8]. Hayes et al. examined a community sample of 354 adults and found a lifetime prevalence of SPD of 5.4% [6]. Keuthen et al. reported a lifetime prevalence of 1.4% in a random sample of 2513 adults surveyed by telephone [7]. Most recently, Monzani et al. studied a sample of 2518 twin women and found a lifetime SPD prevalence of 1.2% [8]. Psychiatric comorbidity often occurs in SPD. Tucker et al. described the frequent co-occurrence of depression, anxiety and stress in SPD [9]. In a survey of 1916 American university students, SPD was associated with significantly higher prevalence of anxiety, depression, substance use, and impulse control disorders [5]. A large literature describes associations between SPD and other obsessive–compulsive-related disorders. A significant relationship between SPD and body dysmorphic disorder (BDD) has been documented. Phillips et al. reported that 26% of 123 subjects with BDD picked their skin [10]. Grant et al. investigated 176 individuals with BDD and found that 44.9% reported lifetime SPD and 36.9% reported current SPD secondary to BDD [11]. Hoarding, another obsessive–compulsive related disorder, has also been found to be associated with SPD [12]. The association between SPD and trichotillomania has been investigated extensively, since these two disorders present many similarities [13], [14], [15] and [16]. Monzani et al. reported that the two disorders share a latent genetic factor [15]. In contrast, in a family study of trichotillomania, Keuthen et al. found no familial relationship between SPD and trichotillomania [16]. To date, no studies have examined the prevalence of SPD in the Israeli adult population. Moreover, there is scant literature addressing cross-cultural comparisons of SPD prevalence and associated psychiatric comorbidities. Only one study addressed the question, comparing the prevalence of BDD and its correlates (including skin picking) in 101American and 133 German students [17]. In Israel, the population is comprised of many ethnic groups, the largest subpopulations being Jews and Arabs. Given the different socio-economic characteristics and cultural backgrounds of these groups, we explored whether differences may exist in their SPD prevalence rates and associated comorbidities. The aims of this study were three-fold. First, we sought to estimate the prevalence of SPD in the general Israeli adult population. Second, we compared the prevalence of SPD in the Jewish and Arab study participants to determine whether cultural and religious differences might influence SPD prevalence. This is an exploratory study, since no existing data suggest specific group differences in skin picking or its correlates. Third, we investigated the demographic, medical and psychological correlates of SPD.

This study’s findings document the need for Israeli healthcare providers to be aware that SPD is a relatively common disorder among Israeli adults. Moreover, it is associated with significant psychological distress that should be addressed concurrently with the SPD.