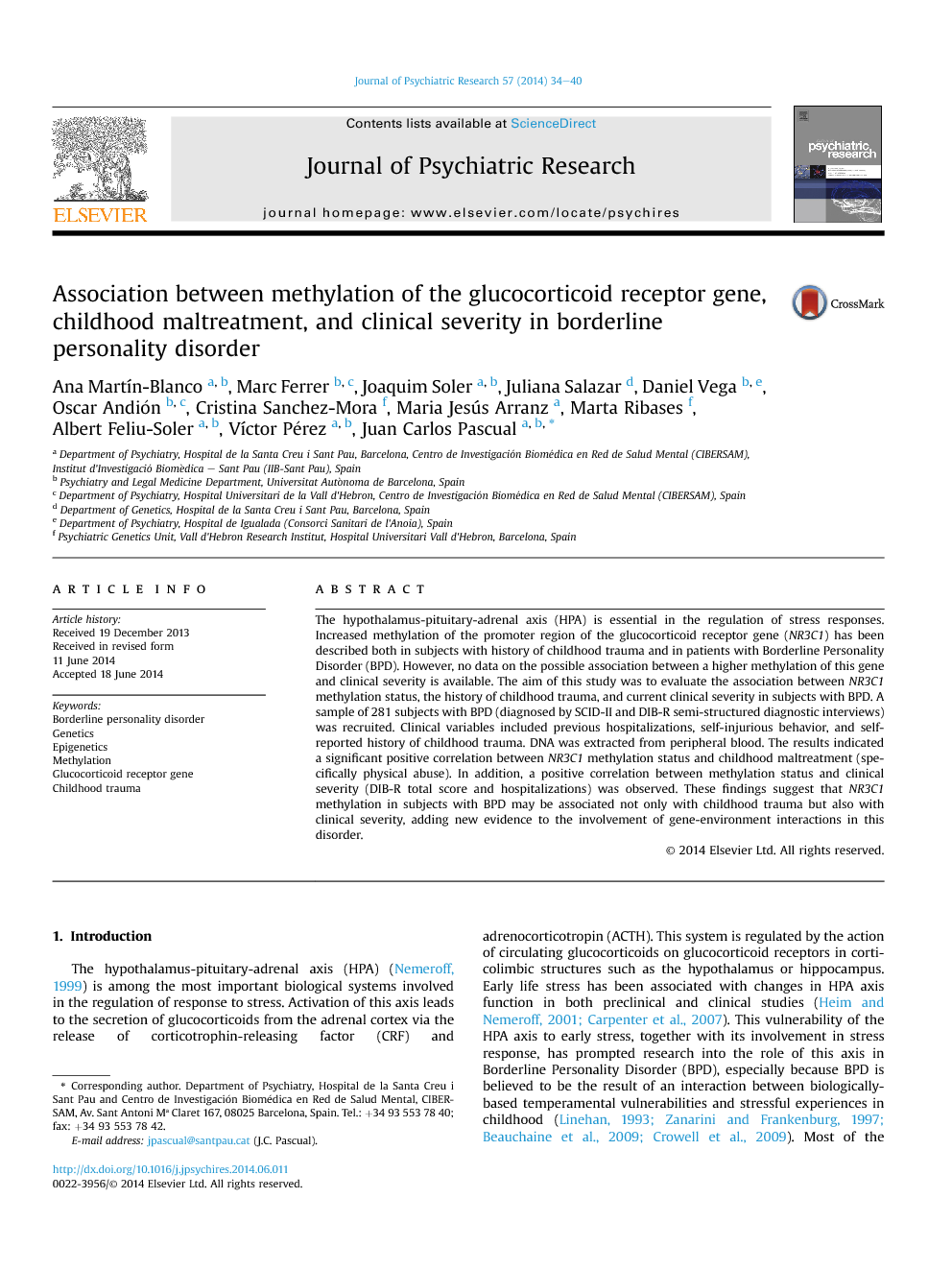 The hypothalamus-pituitary-adrenal axis (HPA) (Nemeroff, 1999) is among the most important biological systems involved in the regulation of response to stress. Activation of this axis leads to the secretion of glucocorticoids from the adrenal cortex via the release of corticotrophin-releasing factor (CRF) and adrenocorticotropin (ACTH). This system is regulated by the action of circulating glucocorticoids on glucocorticoid receptors in corticolimbic structures such as the hypothalamus or hippocampus. Early life stress has been associated with changes in HPA axis function in both preclinical and clinical studies (Heim and Nemeroff, 2001 and Carpenter et al., 2007). This vulnerability of the HPA axis to early stress, together with its involvement in stress response, has prompted research into the role of this axis in Borderline Personality Disorder (BPD), especially because BPD is believed to be the result of an interaction between biologically-based temperamental vulnerabilities and stressful experiences in childhood (Linehan, 1993, Zanarini and Frankenburg, 1997, Beauchaine et al., 2009 and Crowell et al., 2009). Most of the published evidence indicates that BPD is characterized by HPA axis hyperactivity and reduced feedback sensitivity, although some studies have shown contradictory results (for a review, see Wingenfeld et al., 2010). The influence of environmental factors on biological processes might occur through epigenetic mechanisms such as DNA methylation, which inhibits transcription and reduces gene expression. Methylation of HPA axis genes may disrupt the proper functioning of the HPA axis. Epigenetic research on this axis has focused primarily on the glucocorticoid receptor (GR) since the methylation pattern of its promoter region has been linked to early stressful events in rats (Weaver et al., 2004). In humans, methylation of the promoter region of the GR gene (named NR3C1) is reported to be higher in children exposed to maternal stress during pregnancy ( Oberlander et al., 2008, Radtke et al., 2011, Mulligan et al., 2012 and Hompes et al., 2013), in victims of childhood trauma ( McGowan et al., 2009, Labonte et al., 2012, Tyrka et al., 2012 and Perroud et al., 2013a), in subjects with BPD ( Dammann et al., 2011) and in subjects with BPD and history of childhood trauma ( Perroud et al., 2011). While most of the aforementioned studies obtained DNA from peripheral blood, two (both from the same research group) obtained DNA from brain tissue samples ( McGowan et al., 2009 and Labonte et al., 2012). Those two studies found that suicide victims with a history of childhood trauma had higher levels of NR3C1 methylation in the hippocampus compared to victims without such trauma and with control subjects. To date, research on NR3C1 methylation in BPD is scant. Dammann et al. (2011) compared 26 patients with BPD to 11 healthy controls to assess differences in the methylation pattern of NR3C1 (and other neuropsychiatric genes). Those authors found that mean NR3C1 methylation levels were significantly higher in BPD subjects than in the controls. Perroud et al. (2011) evaluated the association between childhood maltreatment and increased methylation of the NR3C1 gene promoter in a sample of 101 subjects with BPD, 99 subjects with major depressive disorder (MDD), and 15 subjects with MDD and comorbid post-traumatic stress disorder (PTSD). Results of that study showed a positive correlation between sexual abuse, the severity of that abuse, the number of different types of maltreatment, and NR3C1 methylation. In the BPD group, both sexual abuse and physical neglect, as well as the number of types of abuse and neglect, were associated with higher methylation levels. Moreover, BPD subjects without childhood maltreatment had higher NR3C1 methylation levels than MDD subjects, suggesting that BPD could be, per se, linked to an increased methylation status. In summary, data from these studies suggest that subjects with BPD who have suffered childhood trauma may have higher NR3C1 methylation levels than those who have not. Moreover, taking into account that both specific kinds of childhood trauma ( Martín-Blanco et al., 2014) and dysfunctions of the HPA axis have been linked to BPD severity ( Carrasco et al., 2007), maybe the methylation status of NR3C1 is also associated with the severity of this disorder. Therefore, the aim of the present study was to evaluate whether an association exists between NR3C1 methylation status in a sample of subjects with BPD and the patients' history of childhood trauma and current clinical severity. Based on previous research, we hypothesized that both factors would be associated with higher methylation levels.