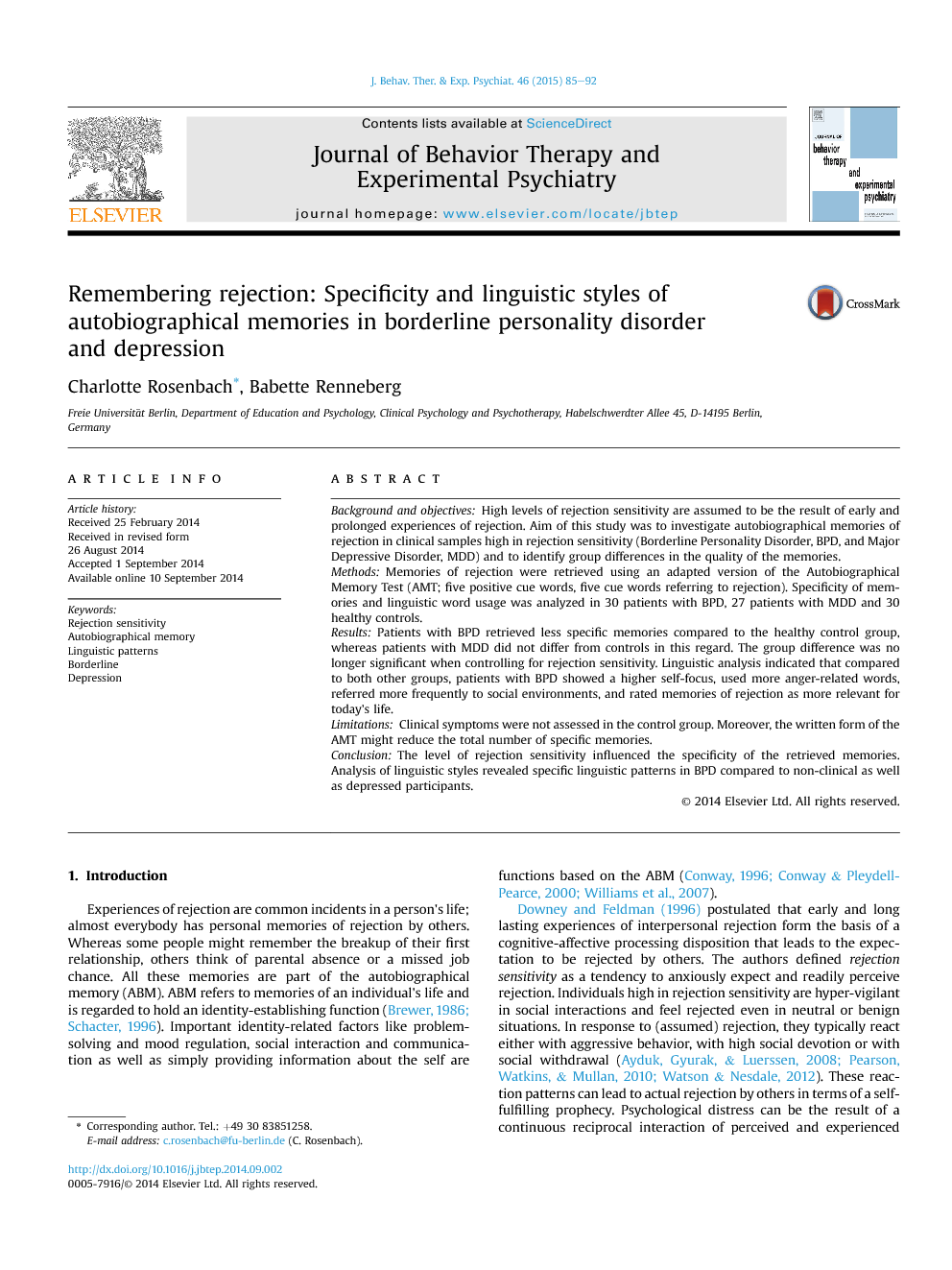 Background and objectives High levels of rejection sensitivity are assumed to be the result of early and prolonged experiences of rejection. Aim of this study was to investigate autobiographical memories of rejection in clinical samples high in rejection sensitivity (Borderline Personality Disorder, BPD, and Major Depressive Disorder, MDD) and to identify group differences in the quality of the memories. Methods Memories of rejection were retrieved using an adapted version of the Autobiographical Memory Test (AMT; five positive cue words, five cue words referring to rejection). Specificity of memories and linguistic word usage was analyzed in 30 patients with BPD, 27 patients with MDD and 30 healthy controls. Results Patients with BPD retrieved less specific memories compared to the healthy control group, whereas patients with MDD did not differ from controls in this regard. The group difference was no longer significant when controlling for rejection sensitivity. Linguistic analysis indicated that compared to both other groups, patients with BPD showed a higher self-focus, used more anger-related words, referred more frequently to social environments, and rated memories of rejection as more relevant for today's life. Limitations Clinical symptoms were not assessed in the control group. Moreover, the written form of the AMT might reduce the total number of specific memories. Conclusion The level of rejection sensitivity influenced the specificity of the retrieved memories. Analysis of linguistic styles revealed specific linguistic patterns in BPD compared to non-clinical as well as depressed participants.

Experiences of rejection are common incidents in a person's life; almost everybody has personal memories of rejection by others. Whereas some people might remember the breakup of their first relationship, others think of parental absence or a missed job chance. All these memories are part of the autobiographical memory (ABM). ABM refers to memories of an individual's life and is regarded to hold an identity-establishing function (Brewer, 1986 and Schacter, 1996). Important identity-related factors like problem-solving and mood regulation, social interaction and communication as well as simply providing information about the self are functions based on the ABM (Conway, 1996, Conway and Pleydell-Pearce, 2000 and Williams et al., 2007). Downey and Feldman (1996) postulated that early and long lasting experiences of interpersonal rejection form the basis of a cognitive-affective processing disposition that leads to the expectation to be rejected by others. The authors defined rejection sensitivity as a tendency to anxiously expect and readily perceive rejection. Individuals high in rejection sensitivity are hyper-vigilant in social interactions and feel rejected even in neutral or benign situations. In response to (assumed) rejection, they typically react either with aggressive behavior, with high social devotion or with social withdrawal ( Ayduk et al., 2008, Pearson et al., 2010 and Watson and Nesdale, 2012). These reaction patterns can lead to actual rejection by others in terms of a self-fulfilling prophecy. Psychological distress can be the result of a continuous reciprocal interaction of perceived and experienced rejection and dysfunctional reactions (for a review, see Rosenbach & Renneberg, 2011). One characteristic feature of Borderline Personality Disorder (BPD) is the fear of abandonment. Rejection by others can be understood as one form of abandonment, thus high levels of rejection sensitivity, and especially rejection expectancy in BPD are conceivable. Previous research has shown repeatedly extremely high levels of rejection sensitivity in BPD compared to other clinical samples as well as to nonclinical control groups (Berenson et al., 2011 and Staebler et al., 2011). An elevated degree of rejection sensitivity has also been observed in clinical samples with depression (Gilbert, Irons, Olsen, Gilbert, & McEwan, 2006). In a direct comparison of these two clinical groups, patients with BPD reported significantly higher levels of rejection sensitivity than patients with depression (Staebler et al., 2011). In view of the assumption of Downey and Feldman (1996) that high levels of rejection sensitivity are the result of earlier experiences of rejection, we wanted to investigate the characteristics of autobiographical memories of rejection in BPD and depression. To this end, we examined the quality of autobiographical memories of rejection regarding specificity and linguistic properties.

Language proves to be a relevant indicator for cognitive and affective processes in confirming clinical and theoretical assumptions of characteristics in BPD. The analysis of linguistic patterns provided first insight in the representation of rejection-related memories in BPD compared to patients with MDD and healthy controls. In response to rejection related cues, patients with BPD used more anger-related words and referred more often to familiar environments (e.g., “My mother was angry with me and didn't talk to me because I have been ‘nasty’ to her. She woke me up in the morning and mischievously did my hair.”) Additionally, they showed a higher usage of 1st person singular and used more words related to negation (e.g., “I was never wanted by my family. My mother left me at the playground when I was 3 years old and never came back. My genitor never was a father.”). Our analyses on the self-rated relevance of memories for today's life emphasize the relevance of rejection related memories in BPD. Taking the identity-shaping character of autobiographical memories into account, it becomes obvious how relevant experiences of rejection are for individuals with BPD and should be considered in the treatment of patients with BPD.