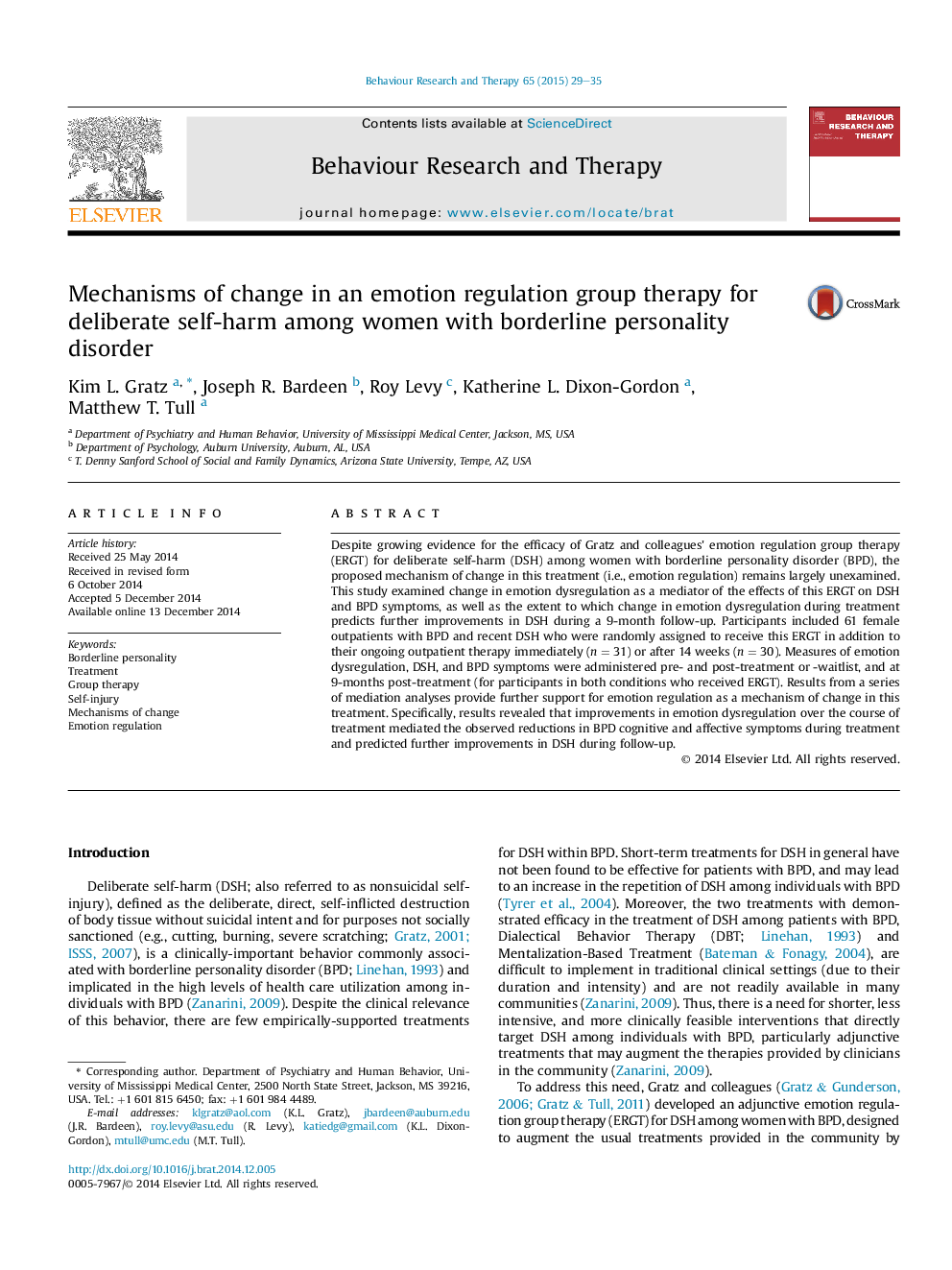 Despite growing evidence for the efficacy of Gratz and colleagues' emotion regulation group therapy (ERGT) for deliberate self-harm (DSH) among women with borderline personality disorder (BPD), the proposed mechanism of change in this treatment (i.e., emotion regulation) remains largely unexamined. This study examined change in emotion dysregulation as a mediator of the effects of this ERGT on DSH and BPD symptoms, as well as the extent to which change in emotion dysregulation during treatment predicts further improvements in DSH during a 9-month follow-up. Participants included 61 female outpatients with BPD and recent DSH who were randomly assigned to receive this ERGT in addition to their ongoing outpatient therapy immediately (n = 31) or after 14 weeks (n = 30). Measures of emotion dysregulation, DSH, and BPD symptoms were administered pre- and post-treatment or -waitlist, and at 9-months post-treatment (for participants in both conditions who received ERGT). Results from a series of mediation analyses provide further support for emotion regulation as a mechanism of change in this treatment. Specifically, results revealed that improvements in emotion dysregulation over the course of treatment mediated the observed reductions in BPD cognitive and affective symptoms during treatment and predicted further improvements in DSH during follow-up.

Deliberate self-harm (DSH; also referred to as nonsuicidal self-injury), defined as the deliberate, direct, self-inflicted destruction of body tissue without suicidal intent and for purposes not socially sanctioned (e.g., cutting, burning, severe scratching; Gratz, 2001 and International Society for the Study of Self-injury, 2007), is a clinically-important behavior commonly associated with borderline personality disorder (BPD; Linehan, 1993) and implicated in the high levels of health care utilization among individuals with BPD (Zanarini, 2009). Despite the clinical relevance of this behavior, there are few empirically-supported treatments for DSH within BPD. Short-term treatments for DSH in general have not been found to be effective for patients with BPD, and may lead to an increase in the repetition of DSH among individuals with BPD (Tyrer et al., 2004). Moreover, the two treatments with demonstrated efficacy in the treatment of DSH among patients with BPD, Dialectical Behavior Therapy (DBT; Linehan, 1993) and Mentalization-Based Treatment (Bateman & Fonagy, 2004), are difficult to implement in traditional clinical settings (due to their duration and intensity) and are not readily available in many communities (Zanarini, 2009). Thus, there is a need for shorter, less intensive, and more clinically feasible interventions that directly target DSH among individuals with BPD, particularly adjunctive treatments that may augment the therapies provided by clinicians in the community (Zanarini, 2009). To address this need, Gratz and colleagues (Gratz and Gunderson, 2006 and Gratz and Tull, 2011) developed an adjunctive emotion regulation group therapy (ERGT) for DSH among women with BPD, designed to augment the usual treatments provided in the community by directly targeting both DSH and its underlying mechanism. Specifically, drawing on theoretical and empirical literature highlighting the central role of emotion dysregulation in the development and maintenance of DSH (e.g., Chapman et al., 2006, Gratz, 2007, Gratz and Gunderson, 2006, Gratz and Roemer, 2008, Gratz and Tull, 2010b, Heath et al., 2008, Linehan, 1993 and Slee et al., 2008), this ERGT was developed with the expectation that teaching self-harming women with BPD more adaptive ways of responding to and regulating their emotions would reduce their DSH. To date, three studies have provided support for the utility of this ERGT in the treatment of DSH among women with BPD, including an open trial (Gratz & Tull, 2011) and two randomized controlled trials (Gratz and Gunderson, 2006 and Gratz et al., 2014). The most recent of these, a larger randomized controlled trial (RCT) and uncontrolled 9-month follow-up (see Gratz et al., 2014), provided further evidence for the efficacy of this adjunctive ERGT (relative to a treatment as usual [TAU] only waitlist condition), revealing positive effects of this treatment on both the primary treatment targets (i.e., DSH, emotion dysregulation, and BPD symptoms) and other relevant outcomes (i.e., depression and stress symptoms, and overall quality of life) within a conservative intent-to-treat (ITT) sample. Moreover, findings from the 9-month follow-up period provide preliminary support for the durability of treatment gains, as all improvements observed from pre-to post-treatment were maintained or further improved upon at follow-up, including additional significant improvements from post-treatment through 9-month follow-up for DSH, emotion dysregulation, and BPD symptoms (among others; Gratz et al., 2014). Despite growing evidence for the efficacy of this ERGT for DSH within BPD, the proposed mechanism of change in this treatment remains largely unexamined, with only one study to date examining the mediating role of emotion regulation in improvements in DSH over the course of this treatment (Gratz, Levy, & Tull, 2012). However, such research has the potential to elucidate both the precise role of emotion dysregulation in the course of DSH and the clinical utility of targeting emotion dysregulation in the treatment of DSH among women with BPD (thereby providing important information on how best to optimize therapeutic change for this population; Kazdin, 2007). Thus, this study utilized data from the most recent RCT to examine emotion regulation as the mechanism of change in this treatment. Specifically, this study examined change in emotion dysregulation as a mediator of the effects of this ERGT on DSH and BPD symptoms, as well as the extent to which change in emotion dysregulation during treatment predicted further improvements in DSH from post-treatment through the 9-month follow-up. We hypothesized that change in emotion dysregulation would mediate the reductions in DSH frequency and BPD symptom severity observed over the course of treatment and predict further improvements in DSH during the follow-up period.