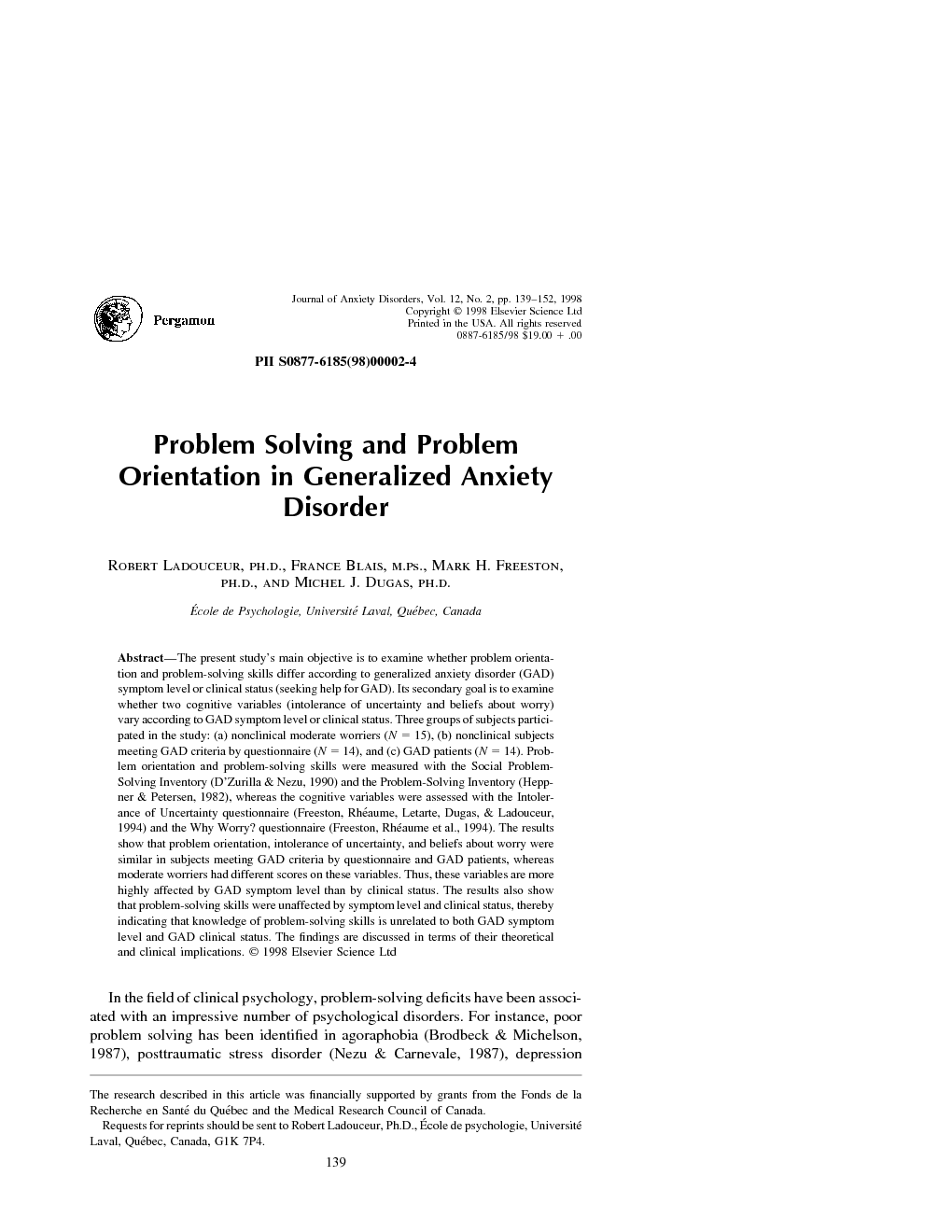 The present study’s main objective is to examine whether problem orientation and problem-solving skills differ according to generalized anxiety disorder (GAD) symptom level or clinical status (seeking help for GAD). Its secondary goal is to examine whether two cognitive variables (intolerance of uncertainty and beliefs about worry) vary according to GAD symptom level or clinical status. Three groups of subjects participated in the study: (a) nonclinical moderate worriers (N = 15), (b) nonclinical subjects meeting GAD criteria by questionnaire (N = 14), and (c) GAD patients (N = 14). Problem orientation and problem-solving skills were measured with the Social Problem-Solving Inventory (D’Zurilla & Nezu, 1990) and the Problem-Solving Inventory (Heppner & Petersen, 1982), whereas the cognitive variables were assessed with the Intolerance of Uncertainty questionnaire (Freeston, Rhéaume, Letarte, Dugas, & Ladouceur, 1994) and the Why Worry? questionnaire (Freeston, Rhéaume et al., 1994). The results show that problem orientation, intolerance of uncertainty, and beliefs about worry were similar in subjects meeting GAD criteria by questionnaire and GAD patients, whereas moderate worriers had different scores on these variables. Thus, these variables are more highly affected by GAD symptom level than by clinical status. The results also show that problem-solving skills were unaffected by symptom level and clinical status, thereby indicating that knowledge of problem-solving skills is unrelated to both GAD symptom level and GAD clinical status. The findings are discussed in terms of their theoretical and clinical implications. In the field of clinical psychology, problem-solving deficits have been associated with an impressive number of psychological disorders. For instance, poor problem solving has been identified in agoraphobia (Brodbeck & Michelson, 1987), posttraumatic stress disorder (Nezu & Carnevale, 1987), depression (Heppner, Baumgardner, & Jackson, 1985) and pathological gambling (Ladouceur, Boisvert, & Dumont, 1994). Recently, a number of researchers have suggested that ineffective problem solving may be related to excessive worry. Borkovec (1985) noticed that although high worriers are experts in identifying potential problems, they remain ineffective problem solvers as they seem to have difficulty implementing solutions. However, this observation does not necessarily imply that high worriers lack solution implementation skills; they may have deficits in other problem-solving steps, which impede the implementation of potential solutions. In fact, a number of studies suggest this may be the case. For instance, Davey (1994) showed that nonclinical high worriers do not appear to lack problem-solving ability per se. However, he found that they do have poor problem-solving confidence and poor perceived control over the problem-solving process, both of which contribute to poor problem orientation. Problem orientation refers to the person’s general response set when faced with a problem and does not include a set of specific skills. It may be described as a higher order metacognitive activity that defines the individual’s general orientation to problems. Our own research team has shown that nonclinical worry is associated with poor problem orientation but appears to be unrelated to knowledge of problem-solving skills (Dugas, Freeston, & Ladouceur, in press; Dugas, Letarte, Rhéaume, Freeston, & Ladouceur, 1995; Lachance, Dugas, & Ladouceur, 1995). According to the Diagnostic and Statistical Manual of Mental Disorders, fourth edition (DSM-IV; American Psychiatric Association, 1994), Generalized Anxiety Disorder (GAD) is characterized by excessive and uncontrollable worry. Although no study has yet to demonstrate that GAD patients have poor problem orientation but adequate knowledge of problem-solving skills, the results of recent studies involving nonclinical worriers point to this possibility. Indirect support for this position comes from Marx, Williams, and Claridge (1992), who showed that in contrast to depressed patients, anxious patients were able to find effective cognitive solutions, but the implementation of these solutions seems to fail. On the other hand, it may be that nonclinical high worriers differ from GAD patients (those seeking help for GAD) in ways that have yet to be understood. It is conceivable that the relationship between GAD symptom level (including worry level) and either problem orientation or problem-solving skills is altered by clinical status or by other variables associated with clinical status. Although research with nonclinical populations has proven useful in understanding other disorders, such as panic disorder (Norton, Cox, & Malan, 1992) and obsessive- compulsive disorder (Rhéaume, Freeston, Dugas, Letarte, & Ladouceur, 1995), some key differences have been found between nonclinical and clinical phenomena. For instance, Freeston, Ladouceur, Provencher, and Blais (1995) found that although neutralization strategies in response to obsessions were superficially similar, there were important differences in a subset of strategies used by patients suffering from obsessive-compulsive disorder. Specific cognitive variables have also recently been linked to worry. Intolerance of uncertainty and beliefs about worry have been shown to correlate with nonclinical worry, regardless of their respective relationships with anxiety and depression (Dugas et al., in press; Freeston, Rhéaume et al., 1994). Intolerance of uncertainty may be broadly defined as the way an individual perceives information in uncertain or ambiguous situations and responds to this information with a set of cognitive, emotional and behavioral reactions (Ladouceur, Talbot, & Dugas, 1997). Beliefs about worry include beliefs such as, worrying can prevent negative outcomes, provide distraction, help find a better way of doing things, increase control or find solutions. For intolerance of uncertainty and beliefs about worry, the same question arises: do they vary according to GAD symptom level or clinical status? The primary goal of the study is to examine whether problem-solving skills and problem orientation differ according to GAD symptom level or clinical status (seeking help for GAD). The secondary goal is to examine whether the two cognitive variables (intolerance of uncertainty and beliefs about worry) vary according to GAD symptom level or clinical status. As suggested by Borkovec and Rachman (1979), research with analog subjects should compare nonclinical subjects and clinical patients on the most significant dimensions of the relevant behavior. By using groups of nonclinical subjects with moderate levels of worry, nonclinical subjects meeting GAD criteria by questionnaire and GAD patients, the present study tests the following alternative hypotheses: (a) the dependent variables vary according to clinical status; or (b) the dependent variables vary according to GAD symptom level.